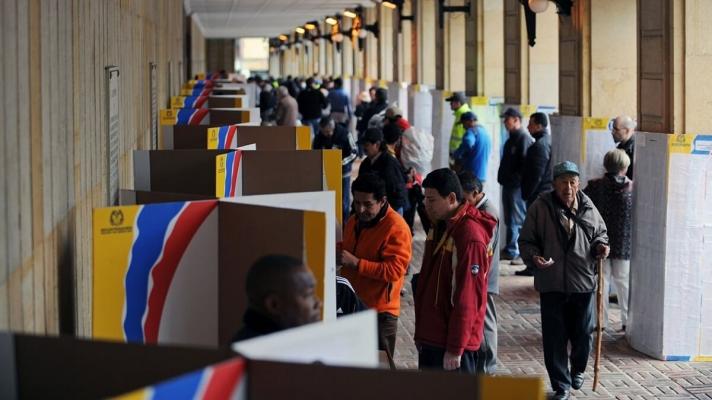 Colombia arrives to the presidential elections in an environment marked by political polarization and the sadly traditional violence. But also, remembering the first anniversary of the popular uprising and with an uncommon hope in a good part of the country.

However, massacres and political genocide against social leaders are intensifying. Nor do the threats of paramilitary groups against the formula representing the Historical Pact cease and only the guerrilla of the National Liberation Army (ELN) has decreed a unilateral ceasefire from May 25 to June 3, to prevent armed confrontations from interfering in the voting process.

WHO POLARIZES THE COLOMBIAN ELECTORATE

Contrary to the discourse of the right wing that controls the Colombian media corporations, the political polarization that marks this electoral dispute is not given by the discourses that evidence the class struggle, because, among other things, none of the presidential candidates is leftist, much less Marxist, although there are leftist parties and organizations within the coalition represented by Gustavo Petro.

The fundamental contradiction that marks the upcoming electoral process is simpler, and accounts for the dramatic situation the country has reached: it is Uribism vs. anti-Uribism.

It could be argued that the dichotomy of continuity or change is common in all presidential elections. But this time it is not only about a change of president, but about breaking with two decades of Uribism. This political doctrine of the Colombian ultra-right wing that bears the name of its leader Álvaro Uribe Vélez has deepened the armed conflict, strengthened parapolitics, legitimized paramilitary forces, ordered the murder of innocent civilians to feign success in the counterinsurgency struggle, increased political genocide in all its expressions, given more power to drug trafficking and, of course, increasingly subordinated Colombia’s interests to Washington’s designs.

Uribism also has an impact on geopolitics as it is a natural ally of all the world’s ultra-right, which is why it has involved Colombia in most international conflicts. In Israel, Morocco or Ukraine, the position of Uribism is consistent, always contrary to the interests of the oppressed peoples.

A special case is that of Venezuela, where Uribe himself has made it a personal challenge to intervene to put an end to the Bolivarian Revolution, promoting and supporting the paramilitary invasion and the use of Colombian territory as a beachhead for all operations of the multidimensional war that the United States has been waging against the country for more than twenty years.

Since his arrival to the Presidency of the Republic on August 7, 2002, this unpunished criminal who is now former President Álvaro Uribe Vélez has marked Colombian politics, to the point of defining who occupies the Palacio de Nariño, and reaching the excess of raising Iván Duque for the 2018 elections, a man basically unknown in Colombian politics, who is now finishing four years of presidency, always in his shadow.

As soon as Duque won the 2018 elections in which he faced precisely Gustavo Petro, we pointed out that if Uribism wanted to survive, this would be the period of Uribism without Uribe, but his mafia boss arrogance prevented him from stepping aside.

Today, Uribe concentrates the rejection of the majority of the Colombian population, particularly the youth. To such an extent that he was forced to publicly assume that the discredit of his figure affected the results obtained by his party in the last legislative elections.

Thus, Uribe and his doctrine are the most palpable cause of the so-called “polarization” that today divides the Colombian electorate.

WHO ARE THE PRESIDENTIAL CANDIDATES IN DISPUTE?

Only three of them appear in the polls with a probable vote higher than 10%:

Gustavo Petro, current Senator of the Republic for having been the losing challenger in the last presidential election of 2018, was mayor of Bogota in 2012 and last March was elected as presidential candidate of the Historical Pact, a coalition of progressive and left-wing parties. Petro is the candidate of antiuribismo.

Only three of them appear in the polls with a probable vote higher than 10%:

Gustavo Petro, current Senator of the Republic for having been the losing challenger in the last presidential election of 2018, was mayor of Bogota in 2012 and last March was elected as presidential candidate of the Historical Pact, a coalition of progressive and left-wing parties. Petro is the candidate of antiuribismo.

Federico Gutiérrez, Uribe’s right-wing candidate, was elected mayor of Medellín in 2016, his then security director was accused of belonging to the narco-paramilitary group known as La Oficina de Envigado, after being elected as the candidate of the right-wing alliance Equipo por Colombia. He received support from Uribe and his Centro Democrático party, and later from César Gaviria.

Rodolfo Hernández is a millionaire builder who was mayor of Bucaramanga in 2016, with a violent and tawdry personality, which is why he is sometimes identified as the Trump of Colombia. Hernandez has been rising in the last polls and emerging as the candidate of the right that despite all ideological affinities, refuses to sink with Uribe, but may finally be the direct or indirect salvation board of Uribism.

The differences between the proposals of these three candidates, or especially between Petro and the right-wing candidacies represented by Gutiérrez and Hernández, are many, but here it is worth highlighting two: the positions on relations with Venezuela and the negotiation policies with the insurgencies.

With all the differences and Petro’s really unfounded criticisms of the Bolivarian Revolution, he has always refused to recognize Juan Guaidó as interim president, and insists that his government will resume diplomatic and trade relations with Venezuela. In the latter he agrees with Rodolfo Hernández, while Federico Gutiérrez upholds the position assumed by the government of Iván Duque.

Regarding policies with the insurgency, all three speak of compliance with the agreements signed between the State and the FARC-EP in 2016, but only Petro proposes to resume dialogues with the ELN, which is today the largest guerrilla organization in Colombia.

THE UNITED STATES AND THE ELECTORAL DISPUTE IN COLOMBIA

Regarding the relations with the United States, which have been and are of absolute subordination and military occupation, the position of the three candidates seems to coincide in general terms, since none of them has declared to be willing to touch the US interests in Colombia, and none has dared to include in its proposal any kind of control to the US military presence in Colombian soil or to question the country’s link with NATO.

In contrast, the U.S. position does appear to be ambiguous. While it is logical to think that it was a call from the US Embassy that stopped the institutional coup attempt promoted by Uribism after the electoral failure in the March legislative elections, a few days ago the US ambassador in Bogota, Philip Goldberg, referred to a “possible Russian infiltration” in the Colombian electoral process, as, according to him, happened in the US elections in 2016 and 2020. To these statements, only the vice-presidential candidate for the Historic Pact, Francia Márquez, dared to respond, who described them as interference.

Márquez, a working woman, social leader of the Afro Colombian people, feminist and environmentalist, is the one in whom the leftist sectors of the Historical Pact feel truly represented, and unlike Petro, she has publicly expressed her desire for Colombia to leave NATO, and has also spoken out against the exclusion of Cuba, Venezuela and Nicaragua from the Summit of the Americas, and the U.S. blockades against these countries.

Although none of the candidates are perceived as likely to jeopardize U.S. interests, the Biden administration and the U.S. Congress have been quick to take steps to tie down the next president. One of these has been the designation of Colombia as a non-NATO military ally signed by Joe Biden and an accompanying bill, which we discussed in a previous article and which has now been introduced under a new name by representatives of both countries, as the “U.S.-Colombia Bicentennial Partnership Bill.”

POSSIBLE SCENARIOS FOR TODAY AND THE FOLLOWING DAYS

If this day goes smoothly, the results predicted by all polls show Gustavo Petro as the winner. What is in question is whether he will win with half plus one of the votes to win in the first round, or if he will win with less and then he would go to a second round to be held on June 17 of this year.

If so, the question is whether Federico Gutiérrez or Rodolfo Hernández would compete with him, and although all polls and projections consider Petro as the winner also in the second round, such triumph would not be easy and would surely force to make approaches and some concessions with other organizations in order to achieve it.

But the most worrying are the scenarios of violence that Uribism in its desperation could unleash. An assassination of Gustavo Petro or Francia Márquez is so possible in this enclave of imperialist terrorism, that even a group of twenty-four U.S. congressmen headed by Alexandria Ocasio-Cortez addressed a letter to the Secretary of State, Antony Blinken, in which they express their concern for these threats.

Secondly, there is evidence that Uribe, as a loyal friend of Donald Trump, is considering chanting fraud and thus calling for international organizations, military uprisings and/or paramilitary actions. This maneuver, which is shameful for those who for two decades have benefited from the precariousness of the Colombian electoral system, is already sufficiently denounced by the Colombian opposition, but Uribism keeps it in the discourse.

Former presidential candidate Alejandro Gaviria defined Petro as a “controlled explosion” for a system that has kept Colombians in misery and violence. With that clarity, we know that today Colombia is not at the gates of a revolution, but ending twenty years of Uribism will change the correlation of forces in Colombia and the region in favor of the people. For this reason, all of Our America must be attentive to this day.

Of those to come, we will write in the coming days.