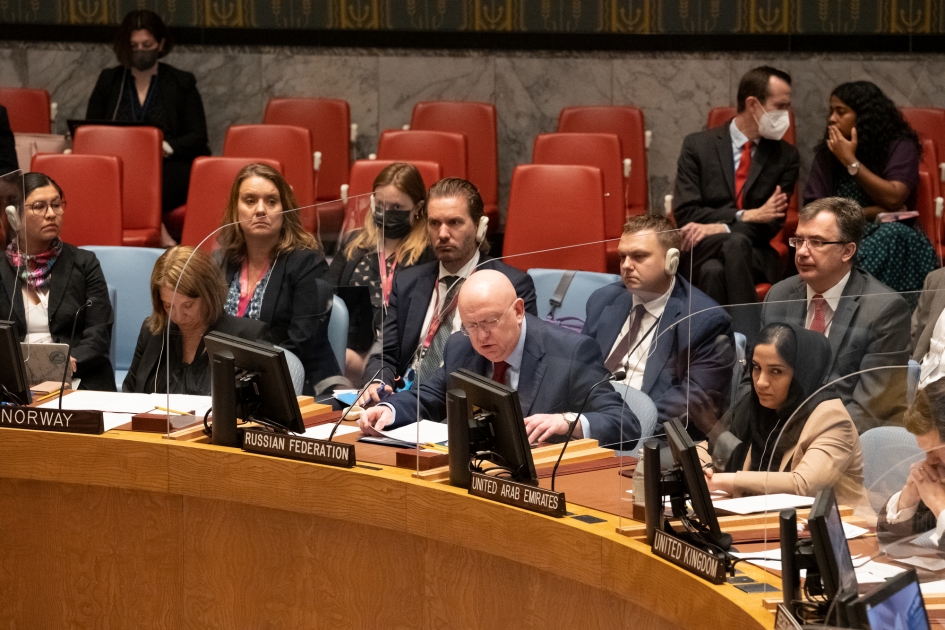 At the outset, let me express our condolences to you, the US Mission, and all Americans with regard to the atrocious crime committed in Texas that killed innocent people, first of all children; and also with regard to previous hate-based crimes committed in the United States. Unfortunately, this also has to do with protection of civilians, though not in an armed conflict.

We welcome our briefers to the traditional June debate dedicated to protection of civilians in armed conflict.

Last year the Security Council adopted two crucial resolutions – 2573 on protection of civilian infrastructure and facilities; and 2601 on protection of schools and education in armed conflict. The global community keeps enhancing the arsenal of international tools that are designed to safeguard the international humanitarian law and protect civilians.

Annual report by the Secretary-General provides a holistic view of the situation of peaceful population in conflict environment. We find it positive that the situation in Afghanistan has improved drastically since American troops withdrew last summer. Unfortunately, in the first six months of 2021, while US presence remained in Afghanistan, an anti-record was set – more than 5,000 deaths and injuries among the Afghans. The report also justly underscores that there was huge toll among civilians in Nigeria, the DR Congo, and Syria.

Speaking of Syria, despite some apparent progress in combating international terrorism, this country is unable to fully recover its peace and security because of the illegal US occupation of a considerable part of Syrian territory. On the occupied territories, there are camps where civilians have to live in inhumane conditions, amidst total havoc and lawlessness. In addition to that, the occupying power started to plunder natural and agricultural resources that are owned by the Syrian people. The United States builds up smuggling and illegal trafficking in Syrian oil and grain. We suppose this is an American recipe for countering the global food and energy crisis. Besides, despite Syria’s protracted humanitarian calamity and economic crisis, the US and EU keep using illegal unilateral sanctions against the Syrian people which trigger catastrophic consequences.

Contemporary international humanitarian law is a set of hard-won rules of responsible behavior of opposing sides that rose from the ashes of two world wars. Russia stood at the origins of this branch of the international law, and we strictly abide by its principles. In contrast to the methods of extermination of the adversary and civilian population that NATO used in its armed action in Yugoslavia, Libya, Iraq, Afghanistan, and Syria, our special military operation in Ukraine pursues the higher cause of saving lives of civilians, who were taken hostages by the Kiev regime.

The special operation clearly showed in what cynical and felonious manner the Kiev authorities, their armed forces, and particularly nationalist militia may act. The Russian side, as well as renowned NGOs keep record of all crimes committed by Kiev. In this case, responsibility is only a matter of time.

The United States and its allies not only turn a blind to Kiev’s crimes against peaceful population, but also partake in killings of civilians. It is Washington that supplies Ukraine with howitzers that are used to shell peaceful cities of Donbas.

Ukrainian armed forces set up gun posts in schools and hospitals on a regular basis. Let me cite a couple of examples – Lisichansk policlinic hospital, where UAF deployed machine gunners in the second and third floors, Kharkov regional children’s hospital No 3, Volnovakha city hospital, etc. This is a non-exhaustive list. Ukrainian armed forces shoot at their people daily, which is confirmed by abundant evidence. The way Ukrainian military treat their compatriots never ceased to astonish us.

Speaking of protection of civilians, we cannot fail to mention speculations and manipulations of public opinion that are taking place around this topic. We raise such cases in our statements on a regular basis.

The most telling example is Ukraine’s blatant provocation in Bucha that sprung into the focus of global media in early April. Two days ago, at a Security Council meeting on technology and security, representative of the UK tried to raise doubts about our conclusions that the Bucha incident had been a staged provocation. As a proof, he referred to satellite images published by the New York Times. According to them, the bodies in the streets of Bucha had been visible from satellites and lain there since 11 March.

I am not going to address the doubtful quality of the images. We have had no opportunity to make sure that those were authentic, because MAXAR company that owns them does not sell its products to Russia. Suppose the images were authentic and the dead bodies which Ukrainian correspondents caught on camera on 3 April had indeed lain there since 11 March (even though initially Kiev and the West had a different version). Then a question begs itself: why the April film shows no signs of decay or impurity? Weather forecasts say that the temperature in Bucha rose up to +16ºC at that time. Any forensic expert, even a beginner, will tell you that by the end of the second week since the moment of death, dead bodies not only show visual signs of decay, but they actually turn almost black. However the bodies demonstrated by the Ukrainians have no visual signs of decomposing. This can only mean one thing – what NYT wrote was a lie.

Our British colleagues said much more in that statement. We will soon give a detailed reply to that, i.a. on social media. Now let me just underscore that it is the UK that tries to contest apparent inconsistencies of the Bucha provocation. Also, it was the UK that in its capacity as President of the Security Council in April rejected two our requests for a meeting where we suggested addressing this provocation.

It is rather noteworthy that our Western colleagues quickly lost their interest in the Kramatorsk provocation, where a Ukrainian military had bombarded a train terminal on 8 April, killing more than 50 civilians. Ukraine did a botched job out of this false-flag operation, which made the responsibility of the Ukrainian side far too obvious.

Let me now draw attention to the issue of tortures and humiliations of Russian prisoners by Ukrainian nationalists and armed forces. There are numerous testimonies by Ukrainian soldiers who were taken prisoners that they had been ordered to shoot civilians and never take Russian soldiers as PoWs.

When it comes to Russian armed forces, humane treatment of prisoners is a norm. This is confirmed by our treatment of UAF soldiers and Azov nationalists who recently quitted the Azovstal steel works and surrendered. Those were 2439 people from various Ukrainian formations. All military servicemen and officers were treated respectfully, the wounded received medical aid. Both them and their relatives, with whom they have an opportunity to communicate, confirm this. I am now also speaking of those fighters who marred themselves with most heinous war crimes.

All perpetrators guilty of intended attacks on civilians or deaths of civilians caused by indiscriminate or disproportionate use of force in violation of the IHL norms will face the law.