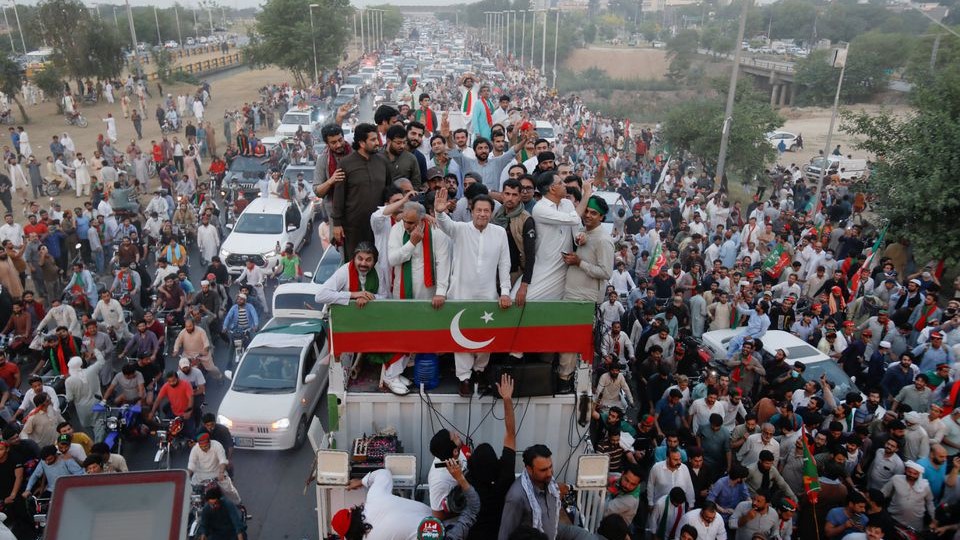 On 26 May, ousted Pakistani prime minister Imran Khan gave authorities a six-day ultimatum to declare a date for new elections.

“I want to give a message to this imported government to announce elections within six days. Dissolve the assemblies and call an election in June,” Khan stated.

His warning came one day after mass popular demonstrations in Islamabad against the US-orchestrated plot that removed him from power.

Khan said that, if authorities ignore his ultimatum, even larger marches and protests will take place.

As thousands of his supporters poured into the capital, security forces launched intense crackdowns on the initially peaceful marchers. Over 1,700 protesters were arrested during the march.

Khan himself joined the rally, flying in by helicopter to a highway before joining a motorcade towards the capital.

We have entered Punjab and will InshAllah be heading towards Islamabad.
No amount of state oppression and fascism by this imported govt can stop or deter our march.#حقیقی_آزادی_مارچ pic.twitter.com/NMRNRU2F3G

Chaos, clashes, and road blockades ensued as a result of the violent crackdown. Khan eventually called on his supporters to disperse and return home.

The Pakistani government has stood by its decision to not hold new elections.

Current Prime Minister Shehbaz Sharif labeled the protests as an attempt to “divide the nation and promote chaos.”

A few minutes after midnight on 10 April, the parliament of Pakistan successfully held a no-confidence vote to oust Khan from office.

The former prime minister accused the opposition of conspiring with “foreign powers” to oust him because he would not comply with western demands to oppose Russia and China.

Pressure on Khan started after 6 March, when he made headlines criticizing western powers for pressuring Islamabad into condemning Russia’s military actions in Ukraine.

“What do you think of us? Are we your slaves … that whatever you say, we will do?” Khan said at a political rally.

On 11 April, lawmakers in Khan’s Pakistan Tehreek-e-Insaf (PTI) party handed in their resignations en masse prior to the vote for electing the next prime minister.

The lawmakers said they would not allow a government brought in by foreign intervention to take control of Pakistan.

An analysis by The Cradle emphasized that the current political turmoil in Pakistan is being prolonged by Washington urging Sharif not to dissolve the government, which would lead to new elections that would likely be won by Khan.

Furthermore, the analysis suggests the Pakistani army is not able to easily step in and rectify this political turmoil, as it has for past squabbles, due to its sensitive and unique circumstances.

While Pakistan’s current and former prime ministers face off and the country slips into deep crisis, its military establishment loses trust across the spectrum.

Pakistan plummets into political chaos a month after Imran Khan’s ouster. But this time the military cannot step in to arbitrate, as they are now a focus of public anger.

A month after the ouster of former prime minister Imran Khan, Pakistan has plunged into political instability, with dire implications for national security, if left unresolved. This situation is a result of the acute failure of state institutions – primarily the military and supreme court – to manage the country’s political fallout since parliament ejected Khan in April.

Numerous analysts have drawn parallels with the political crisis in Sri Lanka, suggesting that Pakistan could be heading in a similar direction i.e., a debt trap leading to insolvency and loss of sovereignty. However, if Islamabad re-establishes a political consensus that can safeguard its national interest, the Sri Lankan predicament can be easily avoided.

Currently, Pakistan’s political disarray remains severe enough that no single state institution or political party is prepared to tackle or inherit the mess. The country, today, is essentially without a de-facto leadership.

Is Nawaz Sharif pulling the strings?

Prime Minister Shehbaz Sharif’s government which, in a very short period, has already bled through its credibility and legitimacy, has neither the capacity to run the government nor is it prepared to dissolve parliament and call for new elections. The entire cabinet is reportedly receiving directions from the British-based, three-time former prime minister Nawaz Sharif, an absconder and fugitive.

The current government is led by a multi-party coalition consisting of Sharif’s Pakistan Muslim League – or PML (N) – and the Pakistan People’s Party (PPP), led by the Bhutto-Zardari clan. The latter played a shrewd game by handing over government control to the Sharifs, knowing full well they would be unable to handle the political and economic fallout from Khan’s ouster.

According to Junaid Ahmad, director of the Lahore-based Center for Global Dialogue, Nawaz Sharif wants to dissolve the government, but Washington will not allow him to do so. Any astute Pakistan analyst understands that in the event of new election, the Sharifs would be pitted directly against an ever popular Imran Khan whose tsunami of public support will sink them. Ahmad thus contends that for as long as the Sharifs are in power, the current crisis will worsen.

Pakistan’s military establishment, once viewed as a universally popular, nationalist body able to cauterize troublesome domestic political squabbles, now finds itself sharing this hot seat. With a few months left to his tenure, Chief of the Army Staff (COAS) General Qamar Bajwa, in particular, has been thrown into the firing line and is facing unprecedented criticism from every quarter. In the early days of the crisis, there was a general public perception that Pakistan’s top military command, with Bajwa at its center, were behind the ouster of Imran Khan’s government – with foreign backing, no less.

Prominent Pakistani journalist Haroon Rasheed has said that when Bajwa spoke to retired military colleagues, he lamented the fact that Imran Khan wouldn’t listen to any of his political directives, hence negating his own claim that he is apolitical and neutral.

This perception has created substantial fallout: Anti-Bajwa criticism has severely damaged the image of senior military leadership who continue to support Bajwa. According to Rasheed, Khan has tried to dissuade his followers from adopting an anti-military stance because negative criticism of the ‘revered’ military could only serve the interests of his adversaries, both home and abroad. This principled posture has served to boost Khan’s popularity among both current and retired military officers and their families.

Sabir Shakir, another prominent analyst and TV anchor, has noted that this political development is unprecedented in Pakistan. Normally when the military plays a role in ousting a Pakistani leader, the latter indulges in anti-military rhetoric, but Khan has only added more momentum and legitimacy to his movement by doing the very opposite.

When Khan’s Pakistan Tehreek-e-Insaf (PTI) party assumed power in 2018, it was the only Pakistani political party supporting the role of the army in the national discourse. Now that General Bajwa is seen by PTI members and the general public as having facilitated the installation of an “imported government,” the army finds itself completely isolated while facing both an internal and external backlash.

The army’s reputation at stake

Professor Ejaz Akram, known to be close to both PTI circles and the military establishment, has argued that it is an indisputable fact that a strong nationalist and professional military is the guarantor of Pakistan’s national cohesion and security. The army has long been considered a vanguard of the ideological and geographical boundaries of the country, with the admiration and support of the public.

So far, throughout this crisis, the biggest blow to Pakistan has arguably been the erosion of this perception that the military is the country’s ultimate custodian. According to Akram, the army’s reputation has been eroded but is still salvageable – pending the leadership adopting the necessary corrective measures.

The irony here is that the military establishment faces negative criticism not only from the general public, but also from the Sharif coalition government who acceded to power after toppling Khan.

Khan has the people power

Amidst this national chaos, Imran Khan is demanding that new elections be held, only this time without the military’s support. The former PM believes that with unprecedented public support he can pressure the government and General Headquarters (GHQ) to agree to early polls. Khan has been addressing huge rallies almost every day in different cities across Pakistan, mobilizing the masses and increasing pressure on the military establishment – not by naming them directly, but couched in a veiled discourse to preserve the sanctity of the institution.

According to prominent, retired military analyst Lieutenant General Amjad Shuaib, Imran Khan has displayed tremendous political maturity by refraining from directly criticizing the military. Shuaib has openly called on the military leadership to support Khan, restore his government through elections, and rid the country of the corrupt administration which has been installed against the Pakistani will.

Rumors abound that the same western powers who promoted Imran Khan’s ouster, are now also dissatisfied with his replacement. The PML-N and the PPP-led coalition government is seen to be too weak, facing corruption charges, and an extremely hostile reaction from the public. As such, no international power is willing to deal with them anymore.

Without a plan or assistance, Pakistan’s current economic outlook is dire: inflation is rising, foreign reserves are fast depleting, fiscal and current account deficits are widening, the stock exchange is crashing, and access to food staples is is becoming more difficult for the average Pakistani. Widespread public dissatisfaction, internal political crisis, the global economic meltdown, and disrupted supply chains have thrust Pakistan into a tailspin – especially as state institutions lack a clear roadmap for salvation.

A contest to appoint the next army chief

If the current government sees the country facing serious political and economic crises which it is unable to address, what then prevents them from holding new elections immediately?

Very simply, both the PML-N and PTI want to be in power to appoint the next army chief in November, but for diametrically opposite reasons.

The PML-N government has been installed at the behest of the US, and therefore needs the next army chief to not only serve its interests but those of Washington. Khan, on the other hand, prefers to select an army chief who will be uncompromising on Pakistan’s national interests and willing to adopt an independent foreign policy based on current geopolitical realities.

Despite myriad other political disputes between the parties, the real battle today centers on this one issue. And the contest is not restricted to political parties, but also involves domestic and international establishments who know very well the powerful role of the army chief in Pakistan. In the meantime, Imran Khan continues to raise the political temperature, while Sharif’s government works overtime to contain the former cricket star’s rising popularity, via harsh measures like arresting PTI officials.

Currently, there are two state organs that can act as arbitrators to provide a resolution; Pakistan’s Supreme Court and its military. The Supreme Court has already distanced itself from the battle, and is silently watching the state collapse. The GHQ, on the other hand, is trying to defend itself from growing public hostility situation, while lacking the courage to defy Washington outright.

In short, everybody is busy safeguarding their own institutional interests instead of easing political confrontations and offering economic solutions. Ultimately, it will have to be the GHQ and the Supreme Court who step in for the greater interest of the country.

Washington wants Pakistan to act against its own national interests and the state organs should resist that. This warrants the dissolution of the National Assembly, and an interim caretaker government to be set up ahead of new elections. Now is the time for Pakistan’s powerful state institutions to show they are in fact committed to safeguarding the country’s national security and sovereignty.