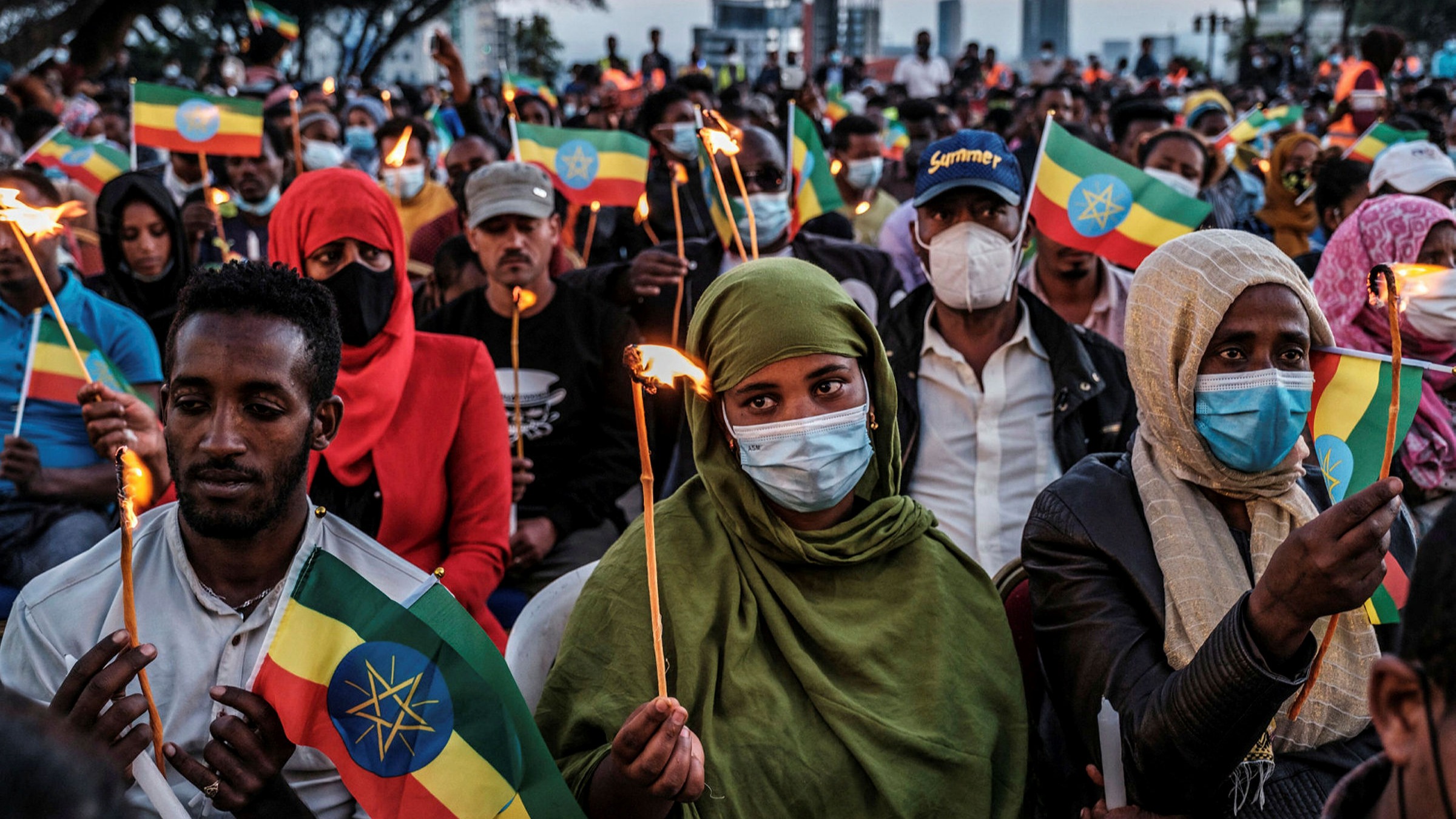 People hold candles and Ethiopian flags during a memorial service for the victims of the Tigray conflict organised by the city administration, in Addis Ababa, Ethiopia © Eduardo Soteras/AFP/Getty

“As the Director-General of WHO, I have a duty to protect and promote health wherever it is under threat, and there is nowhere on earth where the health of millions of people is more under threat than in Tigray.” – Tedros Adhanom Ghebreyesus, Director General of the World Health Organization, March 16, 2022 [1]

“What’s really shocking about this is that all of the mainstream news is about the suffering in Tigray and how Ethiopia is starving Tigray, and there’s very little word about Amhara and Afar.” – Ann Garrison, from this week’s interview.

While the opinions of people in Europe, Canada and the United States is riveted to footage of the spectacular Ukraine war drawing them to the television sets and internet browser regularly, there is little attention drawn to the situation in Ethiopia. [2]

While casualties in Ukraine are counted in the thousands, the death toll in the one and a half year war in Ukraine is tallied in the hundreds of thousands. And on top of that, food shortages unparalleled in nearly forty years are beginning to threaten still more lives.[3][4]

According to an article written for the BBC, the government of Abiy Ahmed who became Prime Minister in 2018 made sweeping reforms, including removing the Tigrayan government leaders charged with corruption and repression. He also ended the war with Eritrea. [5]

The critics in Tigray however branded Mr Abiy’s moves as an attempt to centralize power and destroy the Ethiopian federal system. On account of the coronavirus, the Abiy government withdrew the ability for Tigray to host a regional election and withdrew their funds. This was interpreted as an act of war by the Tigrayan administration, and in November 2020, prompted their forces to attack army bases and steal their weapons. Abiy saw this as crossing a “red line,” and forced the Ethiopian federal government into a military confrontation. [6]

At least one journalist has taken notice of the situation and raises concerns seldom expressed by the mainstream Western media. In particular, she has written several articles documenting the role the so-called Tigrayan People’s Liberation Front (TPLF) played while in power for close to thirty years advancing the interests of the United States. The Tigrayan people, she argued, attacked federal authorities. They were not bullied by Ethiopia and Eritrea. Yet, they are frequently portrayed as the victim, even by the WHO chief Tedros Adhanom Ghebreyesus.

Given that this branding of the players in a country Americans barely know resembles the approach taken in Yugoslavia in 1999, or Syria in the last decade, it seemed like this journalist would make a valuable contribution in a discussion about yet another “genocidal war.” The journalist in question is Ann Garrison. She has covered African countries as a reporter for community radio station KPFA and also for Black Agenda Report. She was in Ethiopia as part of an investigative tour of the region when she was interviewed, and brings a full half hour report to the Global Research News Hour.

However first off, following an article summary, we heard from the activist originally from Eritrea now in San Francisco, Elias Amare, to relate a little about his concerns about the new developments, and whatever he might be hearing from folks on the ground.

Elias Amare is a journalist and editor of Horn of Africa TV. He is also involved with Peace Building Centre for the Horn of Africa. He originally came from Eritrea.

Ann Garrisonis a reporter for Pacifica community radio station KPFA operating out of Berkeley, Fresno, California and Santa Cruz.  She is also a lead reporter for the Black Agenda report. She received the Victoire Ingabire Umuhoza Democracy and Peace Prize  for promoting peace through her reporting on conflict in the African Great Lakes Region.

Notes from Ethiopia, Part IV: The TPLF Destruction of Afar