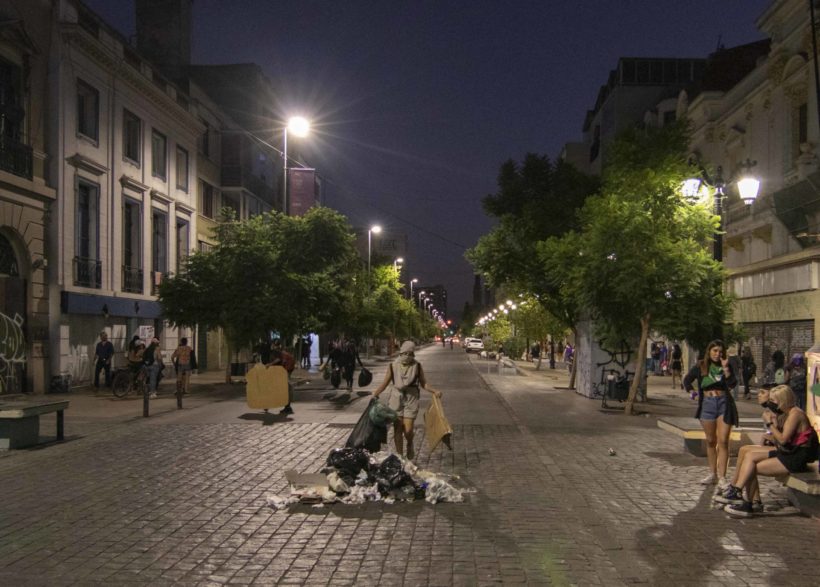 Thus, for about 30 years, a hologram of democracy was destroying our so imperfect, so bureaucratic and so human socialism. I believe that therein lies the main reason why our democratic anti-authoritarian left today is so undemocratic, so authoritarian and has so little left, left.

Several militants of the contemporary Russian left have had a remarkable trajectory. From anti-Stalinism they moved to anti-Leninism, which made them anti-Soviet and now, in their fair or unfair criticism of Putin’s government, they have become defenders of NATO and the Ukrainian far right. Obviously, from their discourse for peace and against imperialism.

Thus, for about 30 years, a hologram of democracy was destroying our so imperfect, so bureaucratic and so human socialism. I believe that therein lies the main reason why our democratic anti-authoritarian left today is so undemocratic, so authoritarian and has so little left, left.

At the opposite point of the terrestrial mirror, in Chile, the brand-new government of Gabriel Boric does not cease to disillusion the illusions and give reasons to the ill-thinkers.

During the May Day march in the center of Santiago, after a brutal police repression that prevented them from advancing, the paramilitary assassins opened fire on the demonstrators, wounding four people, including a social communicator who is on the verge of death.

The carabineros, despite the pleas of those present, intervened only afterwards, and the two assassins arrested at the scene ended up under house arrest. This, while some Mapuche political activists and several detainees of the social revolt remain in Chilean prisons and their government, which has been in power for almost two months now, cannot, does not know, does not dare or simply does not want to release them.

The Chilean playwriter Juan Radrigán spoke of the concept of “unexpectedness” as the only real possibility of something constructive in the face of despair and hope, which keep us in a kind of emotional kidnapping.

In our space of representation of the last century, we culturally and politically construct an enemy in our own image, and perhaps this is the main distortion that prevents us from seeing the tightrope of our search.

The virus of neoliberalism has an infinite capacity to generate new strains and is much faster than our abilities to detect it. The formatted, evolved and revolutionised humanity from other times feels like a gigantic and clumsy dinosaur, which with the inertia of its long nervous system finds out about the bites on its tail only when half of its body has already been devoured.

The social world is still trapped by the light game of so many “progressives” aspiring to power. And the darker the landscape, as in Colombia, the more attractive any fire, whatever it is, and the more urgent the demand for miracles becomes. “We would be happy if we were killed less”, add some realists, the intolerant kind.

We are witnessing the times of total media domination. Any good news, no matter how insignificant, has no chance to become news. Julian Assange’s fate is not just a warning or a punishment, it is the real place for critical thinking, a subject half-forgotten from the schools of the world where isms still meant something.

The media built a new and infallible laboratory: Ukraine. Far beyond the reasons or unreason’s of Putin’s government, the Ukraine project establishes a global media caricature that, painted with fire and fresh blood, according to the morbid and ignorant consumer, fulfils all the expectations of the system: it erases the memory of its thousand wars and colonial plundering and establishes a unique and unquestionable enemy.

The role of the post-Soviet pseudo-left in this is irreplaceable; for the intellectual part of the public, it makes the final touch of “objectivity” so that no one else can think.

When the global right ran out of arguments, which happened around the beginning of this century, with the failure of the “end of history” story, and when the results of the neoliberal reforms became clear, and new social movements rose up against power in various parts of the world, without the Soviet Union and without the parties, changing the geography and geometry of resistance to capitalism, the system bet on the infallible: to become part of the same movements.

As in the 1960s, the “Alliance for Progress” aimed to make the Latin American revolution impossible by strengthening the anti-communist “democratic progressivism” of the time, in the 21st century the “green”, “feminist” and “inclusive” agenda imposed by the centres of power (such as the IMF and the World Bank) on the world’s resistances shattered our historical struggles, diverting the discussion towards the secondary and robbing the social forces of their anti-capitalist essence.

The just and necessary struggles for women’s rights, for discriminated sexual minorities and against racism were, with the help of the media, detached from their political and social content, to be bogged down in discussions about inclusive language and personal responsibilities in the recycling of plastic containers.

Just as the church, which from the beginning of its history and its marriage with power, generated among the faithful the feeling of guilt for sinful thoughts of all kinds, thus ensuring spiritual control, the modern environmentalist discourse, instead of organising the fight against the planet-killing big corporations, forces its faithful to cleanse and atone for their conscience by recycling packaging, detesting and excommunicating the neighbour who does not do so.

Meanwhile, politically correct activists, funded by corporations through their myriad cultural and university tentacles, continue to stroll through their important and alternative meetings, governments continue to push our peoples towards nuclear collapse and the few humans who refuse to support discourses they simply do not share, once again, become an easy target for all.

The Left and its Deplorable Role in Ukraine’s War