Gustavo A. Maranges and Bill Hackwell, Havana on May 7, 2022 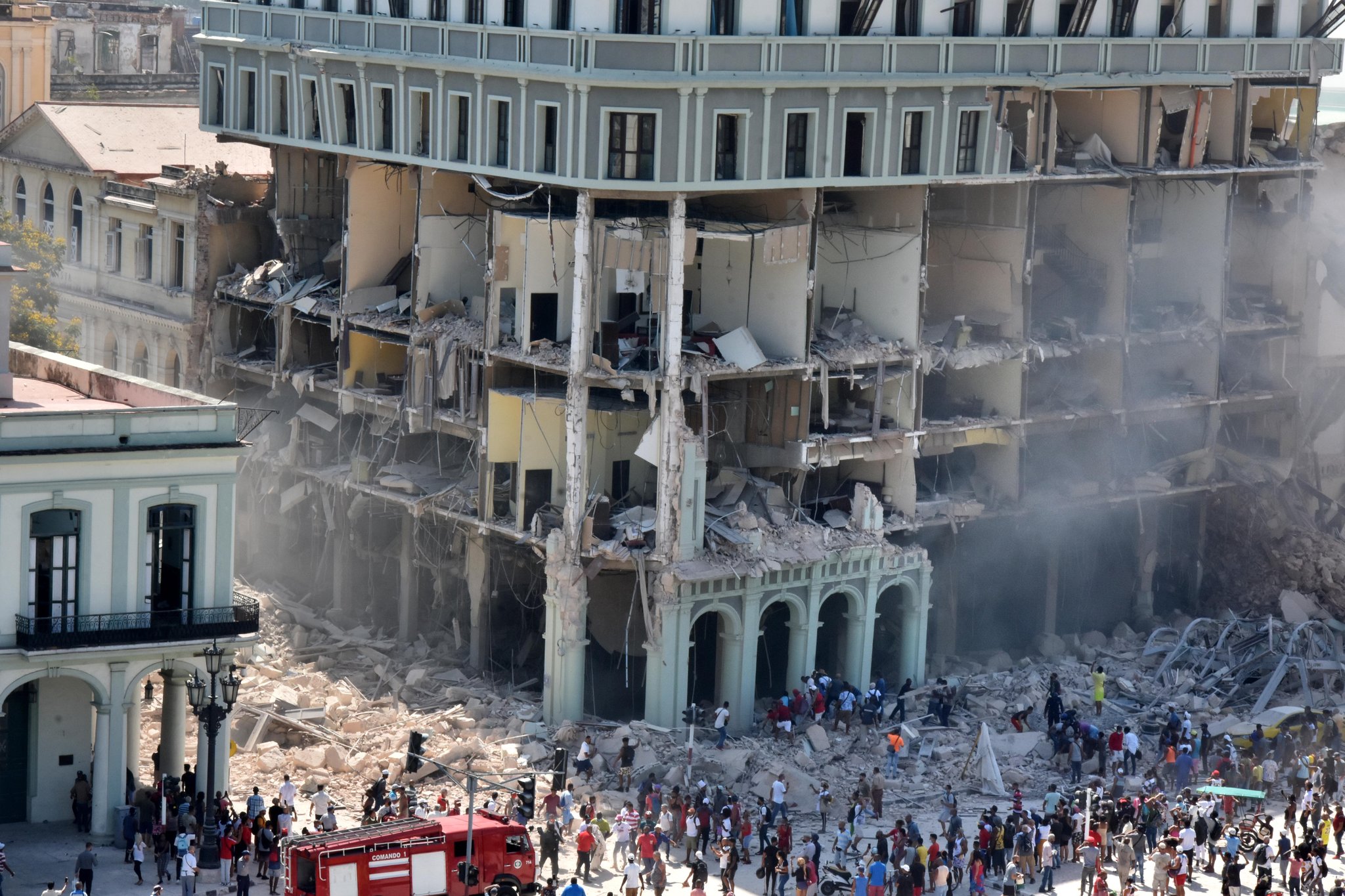 For any Havana resident, the Paseo del Prado is part of his or her identity. Walking along this immense avenue and enjoying the architecture and cultural diversity of this area is a pleasure that many of us enjoy, while for others, it is so common that it becomes barely imperceptible. However, walking around this place will never be the same again because one of the most emblematic images of Havana was the scene of a real tragedy.

Shortly before 11 a.m. yesterday the area was rocked by an explosion in one of the most symbolic hotels in the city: the Saratoga Hotel. While the horrific event remains under investigation Cuban officials are saying the source of the blast was from a mixture of liquefied propane and butane that leaked from a connection between the truck delivering the fuel and the kitchen of the hotel.

The blast also damaged 23 buildings in the area including an apartment building next door, the building of the Yoruba Cultural Association of Cuba, the Baptist Church and the Dona Concepcion Primary School.

Right after the initial shock of the blast hundreds of people in the vicinity rushed to the scene of the accident. The recordings of the first minutes have immortalized the details of the first response, which is genuinely humane and allows us to see the essence of people. Police and bystanders rushed to give aid to those in need. It was one of those moments in which the initial paralysis generated by the catastrophe is overcome by the desire to help people you don’t know without thinking about your own safety.

The response of Havana authorities was immediate, high-ranking officials and the President himself came as soon as they were informed. Diaz-Canel was there right away, just meters from the explosion site, side by side with all those working to pull the injured from the debris. For Cubans this was reminiscent of the explosion of the steamship La Coubre in 1960, and reminds us how similar Fidel and Che acted.

The Saratoga’s shock waves were nothing compared to the explosion of love and human care following the moment. Students from the University of Havana, workers from nearby areas, and CDRs flocked to donate blood for their brothers and sisters. Over 1,500 donations were registered in the closest two blood banks in little more than 10 hours. The response was so massive that the population was asked not to go for 24 hours when more blood will surely be needed. No Cuban had to be summoned to donate their blood they just came from the collective nature that is in the DNA of the revolutionary Cuban people. Commenting on this outpouring of support Gerardo Hernandez, national co coordinator of the Committees for the Defense of the Revolution (CDR) said, “It’s been an amazing response by the Cuban people: young people, older, students, workers, everybody. I witnessed people crying because they were not allowed to donate blood for a number of reasons such as having eaten before they came.”

Others who have given their best are the rescuers. They are working tirelessly, hoping to arrive in time to save one more life. They and the doctors are the heroes in the shade, whose only reward is the happiness of a family. We also heard about the heroic act of the principal of the elementary school near the hotel. He refused to leave the school until all the students and teachers were safe. Those are the stories that make these people so especial.

During his visit to the Calixto Garcia Hospital, President Miguel Diaz-Canel encouraged the doctors to give their best. “Stay strong. We have to save our people,” he said. Subsequently, the Health Ministry informed that the public health facilities have all the resources to fulfill their duty to fight for the lives of all those affected until the last second. Meanwhile, sources from the Interior Ministry and other agencies continue to evaluate the technical state of the affected buildings and define the exact causes of the accident beyond what is known so far about the gas explosion.

As of this morning, 27 people had died, while 60 were receiving the best medical treatment available to save their lives. Some people may think that this is few for the magnitude of the accident and how crowded the area is, but in a country where every person matters, 27 is a huge number. This is not about numbers, but the suffering of Cuban families, mothers, fathers, children, and friends who will never see their loved ones again. Sadly, the numbers could increase in the coming hours as another 15 people are fighting for their lives with the help of the health professionals.

There has been an avalanche of solidarity received from inside and outside the country. Amid the country’s harsh economic situation, mass organizations, the Young Communist Union, along with many people, are gathering donations to help those who have lost everything. Cubans are still a big family.

Today we were able to survey and photograph the damage on the site of the explosion, the smell of gas was still thick in the air as rescuers continued to dig through the rubble for any possible sign of life. From the 3rd floor of the Dona Concepcion Primary School directly across the street from the Saratoga Hotel a young mother picked up things to take from the classroom. We asked her how her child was handling such a dramatic moment and she replied, “He is fine, the only thing he was concerned about was the well-being of his classmates.”