We welcome you to our Arria-formula meeting focusing on the crimes of Ukrainian army and militia committed in the context of Russia’s special military operation in Ukraine. Today we will try to speak as little as possible by ourselves and to share with you accounts of the residents of Eastern and Southern Ukraine and to give the floor to foreign journalists who have been working in these areas.

If you read the Western mainstream media and listen to the Western and Ukrainian politicians you will have in your mind more or less the following picture of what is happening in Ukraine. «Russia, jealous of its neighbor’s success and prospects to become a member of the EU and a part of a free, civilized world, launched a full-scale invasion against this country. Russian forces committed and continue to commit atrocities and brave Ukrainian army and defenders try to shelter them from terrible Russian indiscriminate shellings».

The reality, however, is strikingly different and Ukrainian authorities and their Western backers are not interested in shedding any light on it. I will not raise here the issue of blatant and heinous provocations of Ukraine and its sponsors like Bucha, Kramatorsk and Irpin. This setup is so obvious that the UK Presidency of the Security Council even decided in total breach of the Council’s rules of procedure to deny us our right to call for an urgent meeting on Bucha provocation.

I will just try to debunk some of the myths promoted by Ukraine by passing the microphone to fellow residents of Ukraine who faced gruesome reality on the ground.

As you all know, even military activities have their laws. They are called International Humanitarian Law, which roughly boils down, inter alia, to the following principles: no usage of civilian infrastructure for military purposes; no placement of heavy weaponry in residential areas, no use of civilian population as «human shield» and dignified treatment of the prisoners of war. We have reasons to believe that all those principles are systematically violated by the Ukrainian army and militia.

There are many witnesses claiming that Ukrainian army is using civilians as hostages and «human shield». This is how, for example, the Azov battalion defense tactics in big cities, namely Mariupol, look like.

You may see on the screen how they normally place themselves on the first and upper floors of the residential buildings while civilian population is kept hostage right in the middle of the house. Tanks are placed under the arches, if there are any. The whole building turns into artillery position.

There are a lot of accounts of Ukrainian military placing tanks, artillery and rocket launching systems in residential areas, often despite clear protest of those who live in these neighborhoods, thus turning these buildings in a kind of a sandwich. And that’s how residents of Ukrainian cities describe it. We would like to draw your attention to the words about the theater in Mariupol, which was allegedly destroyed by the Russian armed forces.

We have a lot of accounts of people prohibited to exit besieged cities through humanitarian corridors opened by Russia and even not knowing about the existence of such corridors. I apologize in advance to the Russian-speaking audience. The next video contains some obscenities, but we found it necessary to keep the speech as it is.

A lot of these crimes are attributed to the so-called units of territorial defense which were recklessly armed by Ukrainian authorities despite the fact that there are a lot of convicted criminals and inmates let out of prisons in their ranks. That resulted in anarchy and wide-spread lootings in a number of cities. There are a lot of witnesses of deliberate attacks on residential blocks, houses and civilian infrastructure by Azov and Ukrainian army detachments to present this as a result of Russian military operation, to compromise our claims that we use only high-precision weapons and do not target civilian infrastructure.

The situation around evacuation of civilians from Mariupol is extensively covered in the news right now, the relevant information is heavily distorted by the Ukrainian and Western media. Let’s listen to some of the witnesses. My colleague, First Deputy Permanent Representative Dmitry Polyanskiy will take the floor now to introduce you to one interesting interview.

Dmitry Polyanskiy: Credit for this moving footage goes to Patrick Lancaster, who planned to be with us today, but he couldn’t. It’s his coverage of what is happening now in Mariupol.

I want to make a reference to have Western mainstream media cover the topic of people evacuated from Mariupol. It’s puzzling, because they have same materials as their Russian colleagues, same settings, and same witnesses. It is extremely disappointing that Western journalists in most cases clearly engage in censorship, concealing awkward information from Western public. That’s the way a new iron curtain is being created. I will give you only one very recent example.

On 2 May a group of journalists from many countries interviewd a group of evacuees from Azovstal steel works. One of them, Natalia Usmanova, was very vocal and emotional. That’s why she appeared in many footages. She spoke with REUTERS, and this agency published a short report with a video reel at its website.

But in fact REUTERS censored heavily what she really said. Let’s watch the remaining part of Natalia’s account which was shown in full on Russian TV.

It is clear from this video what the real mood of Natalia Usmanova was. It is really hard to comment on this shameless manipulation. How will Western viewers learn the truth when Russian TV channels, as we all know, are being banned from Western countries. Who is spreading propaganda here? Make a judgement yourself. And my personal remark: shame on you, REUTERS. Instead of promoting journalism, freedom of speech and access to information, you choose the path of becoming soldiers of an information war against Russia. Bu the way, German SPEIGEL published a more extended version of the interview with Natalia Usmanova and deleted it after several hours. We do not have any doubt why.

Vassily Nebenzia: Having watched all these video reels, one might ask a question: why would Ukrainian fighters treat their fellow citizens in such a condescending, denigrating, inhumane way? Why would they destroy Ukrainian cities and not care about the fate of the civilians? The answer is very simple yet difficult to digest: Azov battalions and other nationalists simply do not treat Russian-speaking population as their equals, as fellow-citizens of their country.

Another important issue that we can’t avoid touching is the animal cruelty of the Ukrainian militia towards the Russian military detainees. We intentionally will not demonstrate today the relevant videos, but there are plenty of them on social media. Russian soldiers, with arms tightened behind their backs are shot in their legs, their throats are being cut, they are beaten drastically and their bones are being broken sadistically. And all these tortures are filmed by “proud” Ukrainian militia. To prevent you from going into another round of needless accusations of the Russian propaganda we are simply inviting you to watch the following.

Colleagues, we tried to show to you only some of the accounts of the victims of the crimes and denigrating treatment by Ukrainian army and nationalists. We have many more, this is only a small fraction. We document them to ensure accountability for those who commited these crimes. But because of time limits we will stop at this point and give the floor to our distinguished briefers. They come from different countries but have one thing in common. They all have first-hand experience of working in areas of our special military operation. Many of them were also covering the 8 years long war waged by Ukraine against residents of Donetsk and Lugansk.

Our first briefer hardly needs any introduction. We have the pleasure to welcome Anne-Laure Bonnel, French journalist, who has already done invaluable work to shed light on the life of civilian population of Donbas, who has been simply “canceled” in the humane West.

Our second briefer is Giorgio Bianchi, Italian photojournalist, director, filmmaker and writer. He covered widely the armed conflict in Syria and the Ukrainian crisis starting from “EuroMaidan”. In his work Giorgio always pays particular attention to humanitarian and anthropological issues. He also made an interview with young lady Marianna, whose photos spread with rocket speed throughout Western media as a victims of Russia’s alleged artillery attack on a maternity hospital in Mariupol. How many times have we heard this blatant lies at the Security Council from our Western colleagues?

We are glad to greet today Salem Abdel-Munem, mainly known as Salam Al-Obaidy. He is the head of Moscow and North European bureau of the Independent Pan-Arabic telecommunications network “Al-Mayadeen”. He began his journalistic career back in the late eighties of 20th century, working as a translator in a number of Soviet foreign broadcasting publications. Later, he worked as a correspondent for a number of Arab media in Moscow. He is a universal journalist, and has covered various spheres of life in Russia, the CIS, the Baltic and Northern European states. He has extensive experience working in hot spots such as Afghanistan, Iraq, Libya, Syria and so on.

Welcome to Sonja van den Ende from the Netherlands, whose testimonies about the tragedies in Donetsk and Lugansk People’s Republics are also priceless.

And our last but not least guest today is Asya Zuan, editor-in-chief of the Bulgarian edition of “News Front” Agency who is also very much familiar with the Ukrainian context, in particular Donbas.

We have no doubts that our briefers will help to dilute the one-sided media approach to the happenings in the Eastern parts of Ukraine and will allow to see and hear further testimonies of grave violations of IHL and war crimes by the Ukrainian armed forces and nationalistic battalions.

Vassily Nebenzia: I think we are coming to the end of our meeting. I once again thank the briefers, and not only them, but also those whom the interviewed. Those people do not sit at this table. They often find themselves in terrible conditions. But they gave an account of why those conditions became possible. Unlike what we hear in mainstream media today, they clearly say who is to blame for what has happened to them and what is happening to them.

We hope that this meeting was useful – to present not even alternative, but true accounts of those witnesses, whatever their opinion was. But if your eyes and ears are closed to the truth, and you just read out your national statements from your papers, we cannot do anything with it but try to come again with those true accounts of people who testified. Maybe, some of you are okay being comfortably numb, but it will not change the truth. And you heard that truth today from residents of Eastern and Southern Ukraine and journalists who work there. So open your eyes and embrace the truth, no matter how cruel or uncomfortable it is. 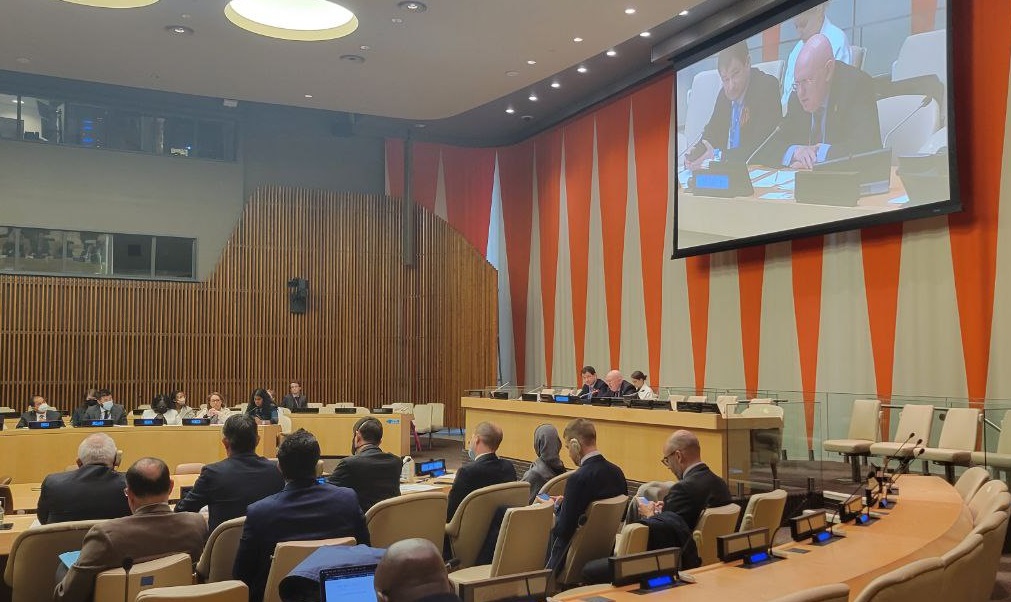 #Nebenzia at #ArriaFormula meeting of UNSC members on #Ukraine🇺🇦: Azov battalion and other nationalists simply do not treat Russian-speaking population as their equals, as fellow-citizens of their country.
🔗https://t.co/5j8hgrQUxC pic.twitter.com/PDgNxpF6HJ