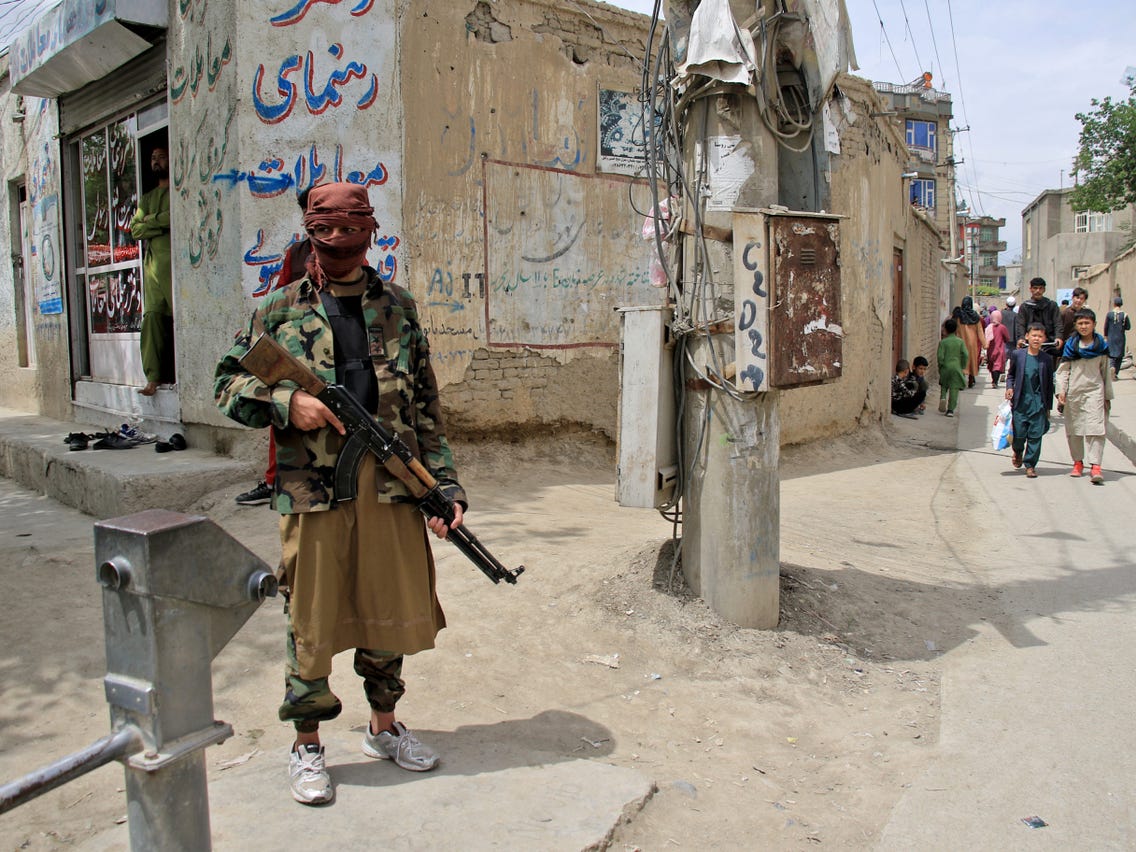 With the arrival of spring, once again begins what has always been an opportunity to escalate the chronic conflict in Afghanistan, no matter who the opponents are, with new and always lethal actions.

The Taliban used this strategy during the twenty years of the US invasion, preserving and strengthening themselves during the hard winters and then returning to their operations with the first calms. The same happened during the anti-Soviet war and the civil war that started after the Soviet withdrawal in 1992, between the Taliban and the Northern Alliance, a group of former fighters from the previous war who did not agree with the ultra-orthodox positions of Mullah Omar, the founder of the Taliban.

The civil war practically ended with the victory of the Taliban when the American invasion began in 2001. The day before the attack on the New York towers, two shahid (martyrs) killed Ahmad Shāh Mas’ūd, the charismatic leader of the Alliance, in a suicide bombing, dealing a decisive blow to the anti-Taliban group.

Anti-Taliban armed groups have existed since the birth of the organization of strict students of the Quran, trained in the thousands of Saudi-funded Pakistani madrassas where Wahhabism was propagated.

These groups – which fiercely resisted the Taliban even at its peak and managed to contain Mullah Omar’s forces in key locations such as Panjshir, Mas’ūd’s homeland, quickly joined the U.S. forces. Many of their leaders came to hold important positions in government structures created by Washington to provide a framework of legality for their intrusion.

Following the fall of Kabul in August 2021 and the resurgence of the Islamic State of Afghanistan, the official name of the country of mullahs, then Afghan First Vice President Amrullah Saleh, after the flight of President Ashraf Ghani, proclaimed himself interim president and urged the population to resist the forces of Mullah Hibatullah Akhundzada, “the prince of the faithful.”

Saleh together with Ahmad Massoud, son of the late Northern Alliance chief Ahmad Shah Massoud, took refuge again in Panjshir, from where they again called for resistance and launched the Afghan National Resistance Front (ANRF), an organization that at the time had a few hundred men from the defunct Afghan National Army and with advice and material assistance from the CIA.

Last January, in the Rukha district of Panjshir, the resistance front failed in an attempt to assassinate Abdul Hamid Khorasani, the provincial security chief, by planting an improvised explosive device (IED) in the path of the column of armored vehicles in which the Taliban chief was traveling. A few days later, on February 7, in the Parenda Valley, also in Panjshir, another Taliban patrol was ambushed without causing major damage.

The attacks triggered a reaction from the Taliban command, which established heavy security and repression measures both in the Panjshir valley and in the neighboring Andarab valley, where some very small groups allied with the FRNA also operate. The Taliban has detained more than 500 people.

Knowing that resistance operations are coming with the onset of spring, the Ministry of Interior and Special Forces has sent significant cores of fighters from Kabul to the north of the country in an effort to limit the operational capability of anti-Taliban forces. The troops sent by the Interior Ministry included special commandos or Sara Khitta in the Pashtun Red Unit.

The scope was such that it reached as far as Panjshir, the powerful Taliban defense minister son of Mullah Omar, Mullah Mohammad Yaqoub, who reportedly personally directed the mop-up operations of the now insurgents, which included helicopters to ferry the Sara Khitta into inaccessible areas and bombing the resistance in the Andarab valley.

It is known that between February and March new anti-Taliban resistance groups were formed in the north of the country that are not necessarily linked to the FRNA, for example, the Afghanistan Liberation Front, which published a video informing about its decision to fight the Taliban and used a flag of its own.

Other resistance-linked organizations that have emerged in recent months include the Wolf Group, led by Yar Mohammad Dostum, the eldest son of Abdul Rashid Dostum, one of the bloodiest and most corrupt warlords to emerge during the anti-Soviet war, who later became an ally of the United States and became vice president between 2014 and 2020. The Dostum group operates in the northern Jowzjan province bordering Turkmenistan, where it appears to have taken refuge after abandoning the defense of the provincial capital of Sheberghan in early August.

Other resistance-linked organizations that have emerged in recent months include the Wolf Group, led by Yar Mohammad Dostum, the eldest son of Abdul Rashid Dostum, one of the bloodiest and most corrupt warlords to emerge during the anti-Soviet war, who later became an ally of the United States and became vice president between 2014 and 2020. The Dostum group operates in the northern Jowzjan province bordering Turkmenistan, where it appears to have taken refuge after abandoning the defense of the provincial capital of Sheberghan in early August.

New organizations also continue to emerge on the intricate horizon of resistance to the Taliban, which for ethnic and tribal reasons insist on fighting the Taliban autonomously, such as the now Freedom Tigers of Turkestan, who in February attacked a Taliban checkpoint south of the city of Sheberghan without casualties. The emergence of the National Front for a Free Afghanistan in the mountains of the east-central province of Kapisa, whose special feature is the presence of female fighters and whose spokesmen spoke in Dari and Pashto, which could indicate that this group might be multi-ethnic, and where the Taliban government has decided to establish a new battalion in the Kohistan district, was also reported. The new organizations also include the Afghanistan Freedom Front, which was known on March 11. This group is believed to be led by General Yasin Zia, former defense minister, chief of general staff in the Ghani government and former aide to Ahmad Shah Massoud in the 1990s. The group has claimed responsibility for attacks against Taliban targets in different provinces, which would occupy a wide radius from Badakhshan in the north to Kandahar in the south.

The National Islamic and Liberation Movement of Afghanistan is believed to be possibly the only Pashtun anti-Taliban group, as they are the majority ethnic group in the Taliban forces, and would be led by Abdul Mateen Sulaimankhail, a former Afghan army special forces commander. The group was formed in mid-February in response to the Taliban’s series of killings of ex-military personnel and called its amnesty a lie. Sulaimankhail said that the group has a presence in 26 of Afghanistan’s 34 provinces, a claim that investigators have been unable to confirm.

Even within the organization, small outbreaks of disobedience are occurring, as happened in mid-January last year, when two Taliban commanders of Tajik origin operating in the Ab Kamari and Qadis districts of Badghis province rebelled against their commanders.

Other very small organizations, such as the Freedom Corps, the Soldiers of Hazaristan, and the Freedom and Democracy Front, have only announced their creation but have not shown any fighters.

In the expectation that the anti-Taliban armed movements will take advantage of the arrival of spring to begin their much-heralded operations, the Taliban high command has ordered the deployment of three battalions of the 207th Corps based in Herat province to the districts of Jawand, Ab Kamari, and Tagab Alam. In addition, another battalion in Parchaman in Farah province, the 203rd Corps in Paktia province sent 1,500 men to Bamiyan province and about 10,000 additional troops to Badakhshan, Takhar, Baghlan and Khunduz provinces. A new military unit, the Panipat Operational and Security Unit, has been created in Nangarhar province specifically to contain the actions of Daesh Khorasan, which has been very active in recent months.

Security forces in the capital are conducting house-to-house raids, mainly in Kabul’s most populous Uzbek and Tajik neighborhoods, in search of anti-Taliban militants and weapons.

In the iconic Kandahar province, where the Taliban movement emerged, the powerful Haqqani Network, a key partner of the mullahs during the war and a separate power in the country’s political architecture, is starting a silent war for power, seeking to increase its influence, which will no doubt raise the temperature further this spring.

Guadi Calvo is an Argentinean writer and journalist. He is an international analyst specializing in Africa, the Middle East, and Central Asia.