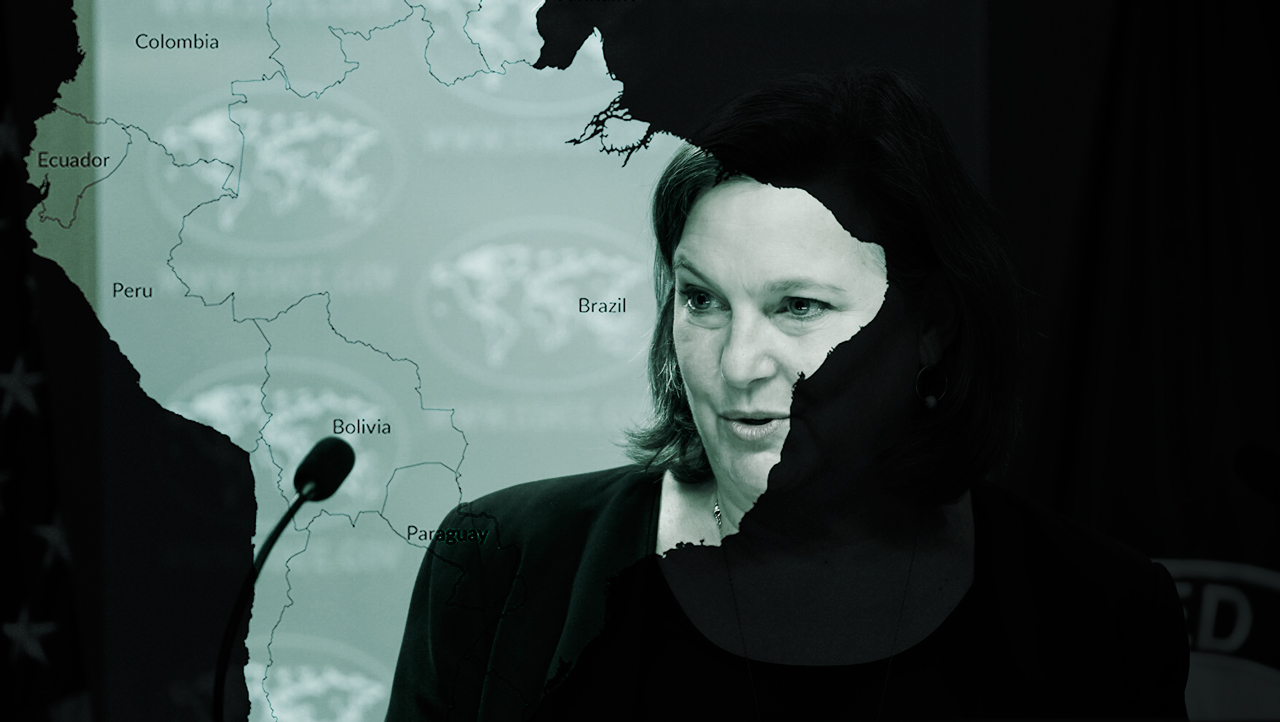 With an election six months away which promises to be far from business as usual, the notorious US official Victoria Nuland’s arrival in Brazil has aroused understandable suspicion.

The US Undersecretary of State for Political Affairs, Victoria Nuland, arrived in Brazil last week for a “Meeting with Young Entrepreneurs from Brazil” and “High-Level Brazil-United States of America Dialogue”.

In an official statement, the visit was called a “diplomatic mission” that aims to bring Brazil closer to US foreign policy.

The arrival of the coup specialist in the midst of Bolsonaro’s attacks on the Federal Supreme Court and the Electoral Court (TSE) may also mean that the pressure may be accompanied by promises of American support for Bolsonaro’s current coup intentions, despite public statements suggesting the opposite. For example Nuland has expressed confidence in Brazil’s electoral system.

Nuland became known in the recent history of US imperialism for being one of the main organizers of the 2014 coup d’etat in Ukraine that toppled President-elect Viktor Yanukovych. In a leaked conversation with then US ambassador to Ukraine, Geoffrey Pyatt, she appears determining who should assume power after the coup. In the conversation, she indicates a name and the ambassador says that the European Union would not accept that nomination. Nuland’s response was: “Fuck the EU”.

Victoria has a worrying track record. In the Bill Clinton administration (1993-2001) she was chief of staff to Deputy Secretary of State Strobe Talbott, responsible for the affairs of the former Soviet Union. Under George Bush (2001-09), she worked with Dick Cheney and was an advisor during the Iraq War.

With that background, George W. Bush appointed her to the post of US ambassador to the North Atlantic Treaty Organization (NATO) in Brussels.

With the election of Joe Biden, she reassumed her post as “expert on Eastern Europe”. She is currently the right-hand of Antony Blinken, the Secretary of State in the Biden administration.

Victoria Nuland has recently turned her attention to Latin America. In February she visited Colombia, meeting with all major candidates in the imminent Presidential election, conspicuously except for the frontrunner, leftist Gustavo Petro, of the Historic Pact coalition. Then just days after a the Biden administration issued a statement of intent to designate Colombia as “major non-NATO ally”, commander of the Army, General Eduardo Enrique Zapateiro launched a shocking attack on presidential favourite Petro.

On her Brazil visit, Nuland posted photos on social media of her meeting with “young entrepreneurs”.  However, some Brazilians observed that none of the young people in the photos are known for working on the themes referred to by Nuland.  There was also no mention of whether they are part of any university, NGO or organized group.

While Brazil’s far-right President Jair Bolsonaro has not condemned the Russian invasion of Ukraine, Victoria Nuland thanked Brazilian diplomats for voting with the United States at the United Nations Security Council.

“In a time when the world is in turmoil, the United States and Brazil need each other,” she told reporters, saying that Russia was “undermining the principles that the U.S. and Brazil stand for.”

Bolsonaro said that Brazil will “adopt a neutral stance” in relation to the invasion of Ukraine and justified his decision because the country is heavily dependent on Russian fertilizers and that the imposition of sanctions could “cause serious damage to agriculture in Brazil.”

The Brazil-USA meeting, which included the Undersecretary for Economic Growth, Energy and the Environment, José Fernández, aims to pressure Brazil to increase oil production and exports since European countries have not readily adopted sanctions, nor given up on Russian oil and gas, as the US desires. Russia exports 8 million barrels a day.  Brazil currently exports 1 million.

The Brazilian Minister of Mines and Energy, Almirante Bento, an advocate of the privatization of Petrobrás (oil) and Eletrobrás (electricity), has already made clear the existence of an “orientation” by the White House for Brazil to radically increase its oil exports, especially to the European countries that are being pressured by the United States to reduce imports from Russia.

Former president Luiz Inácio Lula da Silva, the frontrunner for the coming presidential elections, said that if he is elected, he will not allow the privatization of state-owned companies such as Petrobras, Eletrobras, Correios and Banco do Brasil.

At an event organized by the Homeless Workers Movement, in Santo André (SP), Lula stated that he wants to be elected because “we need to take back Petrobras, we need to not let Eletrobras, Correios, Banco do Brasil be privatized”. Eletrobras already has the authorization process for privatization ready, but it is stalled in Congress, which needs to approve it for the sale of shares to proceed.

On behalf of the US government, Fernandes stated their support for the inclusion of Brazil at the Organization for Economic Co-operation and Development (OECD). Jose Fernandez highlighted the importance of trade relations between the United States and Brazil, as well as the importance of the South American country aligning its actions with OECD values ​​and standards, which it claims will attract more investors, generate more direct and indirect jobs in various sectors.,and improve international trade relations, including with the North American country itself.

Brazil has been trying to get closer to the OECD since the 1990s and applied to be a candidate for the group in 2017 during the post-coup government of Michel Temer. The organization’s board formally began access discussions in January 2022. To be accepted into the group, the country needs to adapt to the organization’s standards, a process that takes time.  Of the 245 instruments, Brazil has already adhered to almost half of them.

“We know that Brazil wants to join the OECD and we are supporters.  We believe that joining the OECD makes the country more competitive, because it attracts more investment, it creates more jobs.  And other countries, including the United States, see an OECD country as a better place to invest.  We support Brazil joining the organization, but we know that it takes time to meet the required criteria”.

Brazil joining the OECD would force constitutional changes to economic policy that would negatively impact the economy. Brazil is currently a key partner of the OECD and thus has access to its bodies, participates in reviews on specific sectors, maintains high-level contacts, in addition to the prerogative to voluntarily adhere to instruments of interest.  Full membership would withdraw economic protections and loss of advantages that are guaranteed to them by their status as a developing country, in addition to the abandonment of autonomy to define their policies and encourage deindustrialization.

The Workers’ Party (PT), whose candidate Lula da Silva is frontrunner for the coming presidential election, opposes Brazil’s entry into the OECD, saying that: We oppose this abandonment of our sovereignty and subordination to the interests of multinational companies and Northern governments.”

Despite leading polls, Lula was prevented running in the 2018 election due to his imprisonment by US-Brazil anticorruption operation Lava Jato, which enabled staunch US-ally Jair Bolsonaro to be elected. The charges against Lula have since been dropped and his prosecution judged to be politically biased by the Brazilian Supreme Court, and United Nations Human Rights committee.

The Military’s Return to Brazilian Politics

Behind the Azov-Brazil Connection: How Neo-Nazis Are Pushing to “Ukrainize” Brazil

Ukrainization and Nazism in Brazil Under the Leadership of Jair Bolsonaro