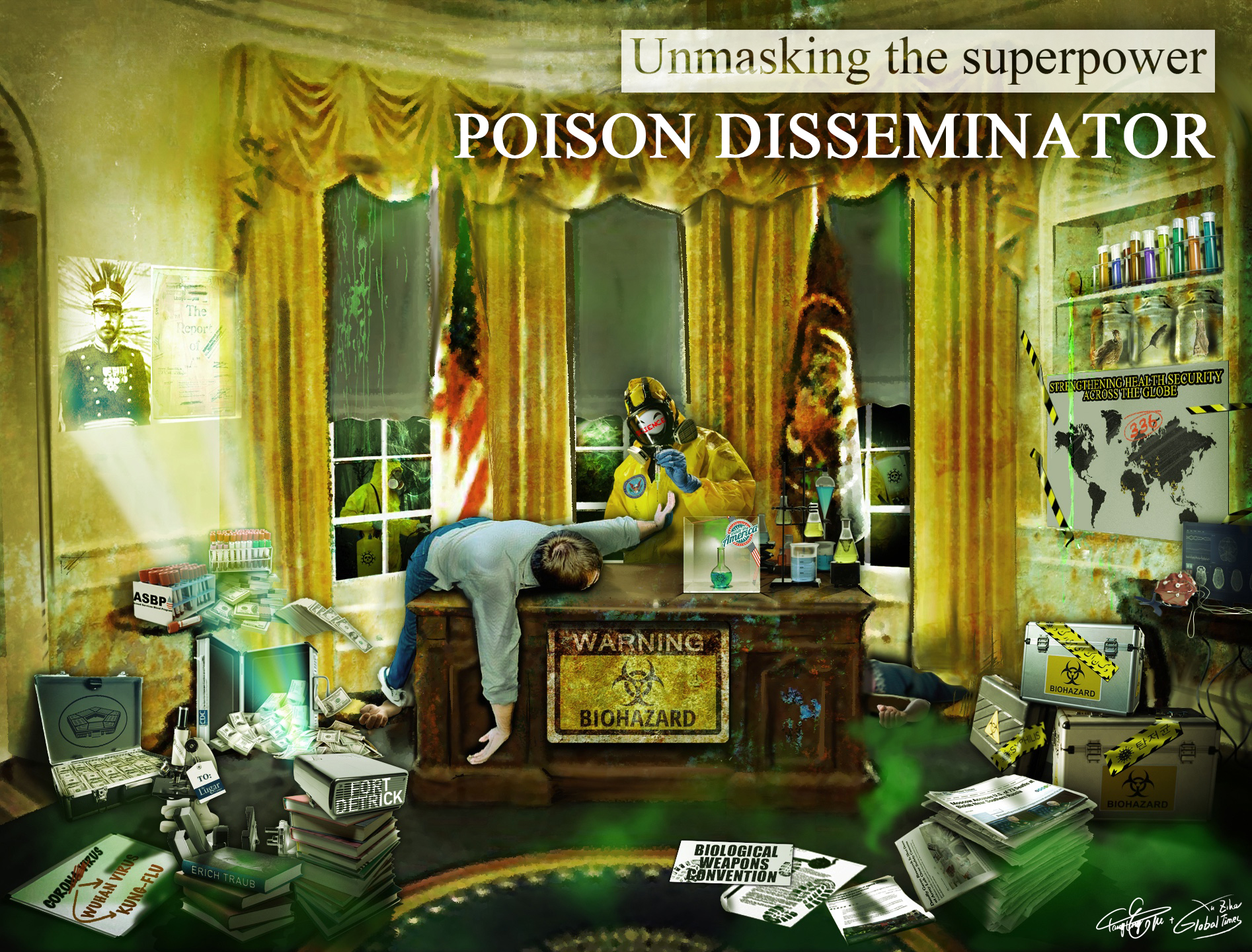 GT Editor’s Note: Since the military conflict between Russia and Ukraine began, the international community has grown increasingly aware of the roles the US and NATO have played behind the crisis.

From funding biological labs to creating ethnic division and ideological confrontation around the world, from imposing sanctions on “disobedient countries” to coercing other nations to pick sides, the US has acted like a “Cold War schemer,” or a “vampire” who creates “enemies” and makes fortunes from pyres of war. The Global Times is publishing a series of stories and cartoons to unveil how the US, in its superpower status, has been creating trouble in the world one crisis after another. This is the fifth installment.

After World War Two (WWII), the US ran amok around the world, leaving behind a plague of war and hatred wherever they went. Whether on the biological front or in the ideological front, the US is the top “poison disseminator.”

1 Ukraine crisis instigator: US-led NATO reneges on ‘Not one inch eastward’ promise to compress Russia’s space to the extreme
2 Instability brewer: Behind every war and turmoil in the world is shadow of the Star-Spangled Banner
3 ‘Vampires’ in the war: US warmongers feeding on the bloody turbulence in other countries
4 Cold War schemer: Reminiscing in its past ‘victory,’ US brings color revolutions to 21st century to maintain its hegemony
5 The poison disseminator: How US spread biological ‘poison’, ethnic division and ideological antagonism around the world
6 Human rights destroyer: US causes humanitarian disasters around globe, killing innocent civilians and creating millions of refugees
7 ‘Voldemort’ of global order: America is the ‘Dark Lord’ set on destroying international order 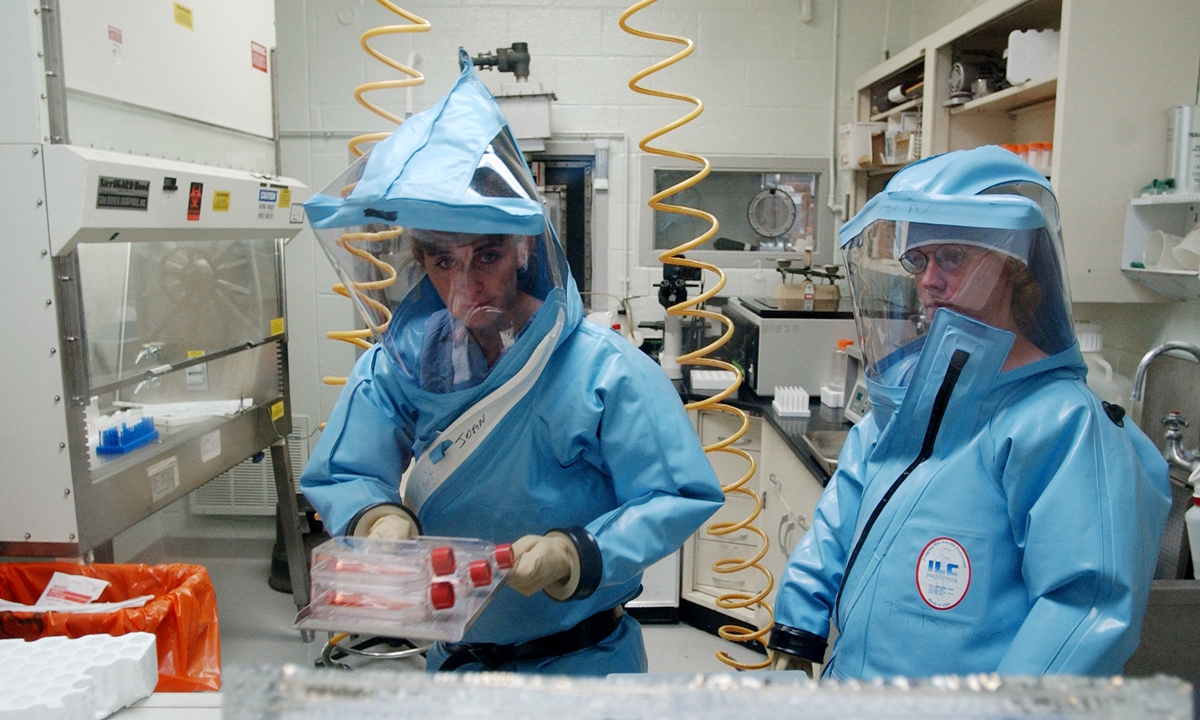 Personnel are working inside a bio-lab at the US Army Medical Research Institute of Infectious Diseases at Fort Detrick on September 26, 2002. Photo: AFP

Since conflict broke out between Russia and Ukraine, biological laboratories in Ukraine that are funded by the US caught global attention.

Earlier that month, Russian defense ministry also disclosed that US spent more than $200 million on biolaboratories in Ukraine, TASS said.

The Russian military said they had gotten hold of documents confirming that Ukraine developed a network of at least 30 biological laboratories that host extremely dangerous biological experiments, aimed at enhancing the pathogenicity of plague, anthrax, tularemia, cholera, and other lethal diseases with the help of synthetic biology. This work is funded and directly supervised by the US’ Defense Threat Reduction Agency (DTRA) in the interest of the Pentagon’s National Center for Medical Intelligence, according to a statement by Russian Permanent Representative to UN Vassily Nebenzia.

The Russian defense ministry said that it learned of the details regarding a project implemented at laboratories in Kiev, Kharkov, and Odessa, which studied the possibilities of spreading particularly dangerous infections through migratory birds, including the highly pathogenic H5N1 influenza (lethal to humans in 50 percent of cases) and the Newcastle disease.

As part of some other projects, bats were considered as carriers for potential biological weapon agents. Among the priorities identified are the study of bacterial and viral pathogens that can be transmitted from bats to humans: pathogens of the plague, leptospirosis, brucellosis, as well as the coronaviruses disease, and filoviruses.

The analysis of the obtained materials confirms the transfer of more than 140 containers with ectoparasites from bats from a bio-lab in Kharkov abroad, according to Nebenzia’s statement.

The bio-labs in Ukraine are only a handful of the 336 biological laboratories the US reportedly funds in 30 countries around the world. Most of these labs are located in the Middle East, Southeast Asia, Africa, and along the perimeter of former USSR, according to the Russian defense ministry.

Despite covert behaviors, the dubious activities of the US’ overseas bio-labs had previously been revealed.

In August 2021, a South Korean civic group sued the Fort Detrick bio-labs and the US Forces Korea (USFK) over the smuggling of toxic substances to US military bases there in violation of domestic law.

In December 2015, the South Korean Yonhap News Agency revealed that the USFK had staged 15 experiments using neutralized anthrax samples at the Yongsan Garrison in Seoul from 2009 to 2014.

US officials gave incongruous responses to the bio-lab issue since Russia disclosed relevant documents. They admitted to the existence of such labs but failed to provide substantial evidence that the programs they funded were to promote public health. Thus, it increased the world’s suspicions over such labs. 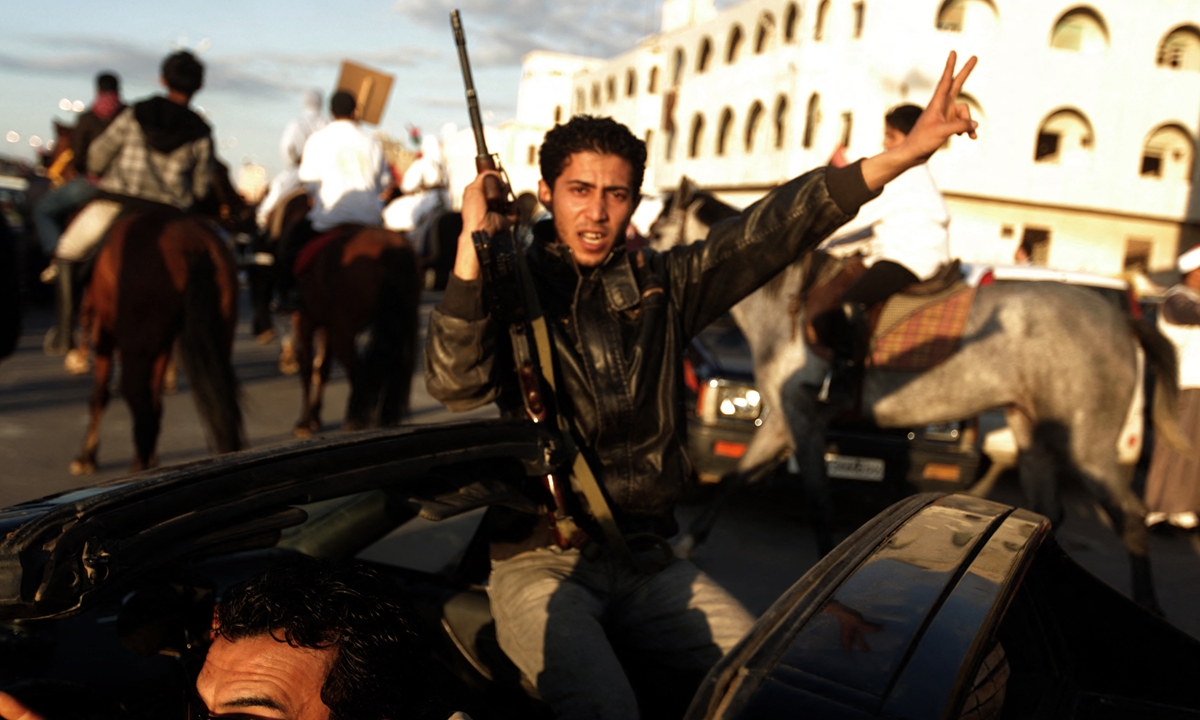 Libyan protesters gather in Benghazi on March 11, 2011 as Arab Spring spread in the country. The US, the UK and France intervened in Libya with a bombing campaign on March 19, 2021. Photo: AFP

The US prides itself on being the “city upon the hill” and a “beacon of democracy.” However, the history of the US was full of wars and killing. During its over 240 years of history, there were only 16 years when the US was not at war.

After the end of WWII, the US became the most powerful country in the world, however, war became an important tool for the US to maintain its own hegemony.

Data shows that from the end of WWII to 2001, the US initiated 201 of the 248 armed conflicts worldwide in 153 locations, accounting for over 80 percent of total conflicts.

The Korean War (1950-53), for example, resulted in the deaths of more than 3 million civilians and created approximately 3 million refugees, and almost all major cities in the Korean Peninsula were left in ruins.

However, the US evidently lacked self-reflection after the Korean War. Immediately after the end of the Korean War, the US intervened in Vietnam in the 1950s under the pretext of preventing the expansion of Communism in Southeast Asia. During the Vietnam War, the brutality of the US army made the war the longest and most brutal war since WWII.

The Vietnamese government estimates that as many as 2 million civilians died in the war, many of whom were slaughtered by US forces in the name of fighting Viet Cong communists.

In March 1999, under the banner of “avoiding humanitarian disaster,” NATO forces led by the US openly bypassed the UN Security Council and carried out the bombing of Yugoslavia for 78 days, causing death of many innocent civilians.

After the September 11 attacks in 2001, the US first invaded Afghanistan in the name of fighting Al Qaeda and the Taliban and then launched a war in Iraq under trumped-up charges.

Over the years, the US instigated the “Arab Spring,” igniting civil wars in Libya and Syria.

Since 2001, wars and military operations by the US have claimed more than 800,000 lives and displaced tens of millions of people.

“We inflated the stature of our enemies to match our need for retribution. We launched hubristic wars to remake the world and let ourselves be remade instead…We midwifed worse terrorists than those we set out to fight,” New York Times columnist Michelle Goldberg wrote in September 2021, on the eve of the 20th anniversary of the 9/11 attacks. A US army tank rolls deeper into Iraqi territory on March 23, 2003 when US forces invaded Iraq. Photo: VCG

Former US president Jimmy Carter once said that the US is “the most warlike nation in the history of the world” due to a desire to impose American values on other countries.

The Cold War was, to some extent, a global confrontation born of ideological opposition. In this process, the US established its own discourse system and promoted a so-called “liberal democracy,” which was the foundation of its cultural hegemony.

In his book, America’s Deadliest Export: Democracy, the Truth About US Foreign Policy, and Everything Else, American diplomat William Blumm reveals the close connection between America’s foreign expansion and its “democracy export.”

Between 1947 and 1989, the US carried out 64 covert operations of subversion and six overt ones, wrote Lindsey O’Rourke, a political scientist at Boston College, in her book Covert Regime Change: America’s Secret Cold War. Costa Rica, Guatemala, Ecuador, Bolivia, El Salvador, Grenada, Honduras, Panama, Haiti, Venezuela…Of all America’s Latin American neighbors, there were few who have not faced meddling from the US.

After the end of the Cold War, the US became more unscrupulous in promoting interventionism and frequently exported “color revolutions.”

A US Congressional investigation in 1976 revealed that nearly 50 percent of the 700 grants in the field of international activities by the principal foundations were funded by the CIA, Frances Stonor Saunders wrote in the book Who Paid the Piper? The CIA and the Cultural Cold War.

These foundations support elites and students from other countries to study in the US and select and support “opinion leaders” who serve the interests of the US.

The US has also long linked economic aid to the “democratic revolution” and put pressure on some developing countries through its leading international financial institutions.

Far from achieving stability and prosperity, most of the recipients of the US’ version of democracy seem to be trapped in the “democratic curse” of political turmoil and national retrogression.

As Michael Parenti, an American political scientist pointed out, the US has been wearing these “democratic” glasses for years. An inexplicable sense of superiority has led the US to stand on the notion of it being the so-called “city on a hill”, regarding its democracy as an “international model,” an unsupported hypothesis, and point fingers at other countries. The US’ enthusiasm for “democracy export” is not really about democracy, but about maintaining American hegemony.

As former US President Bill Clinton said, “defending freedom and promoting democracy in the world is not just a reflection of our deepest values. They are vital to our national interest.”