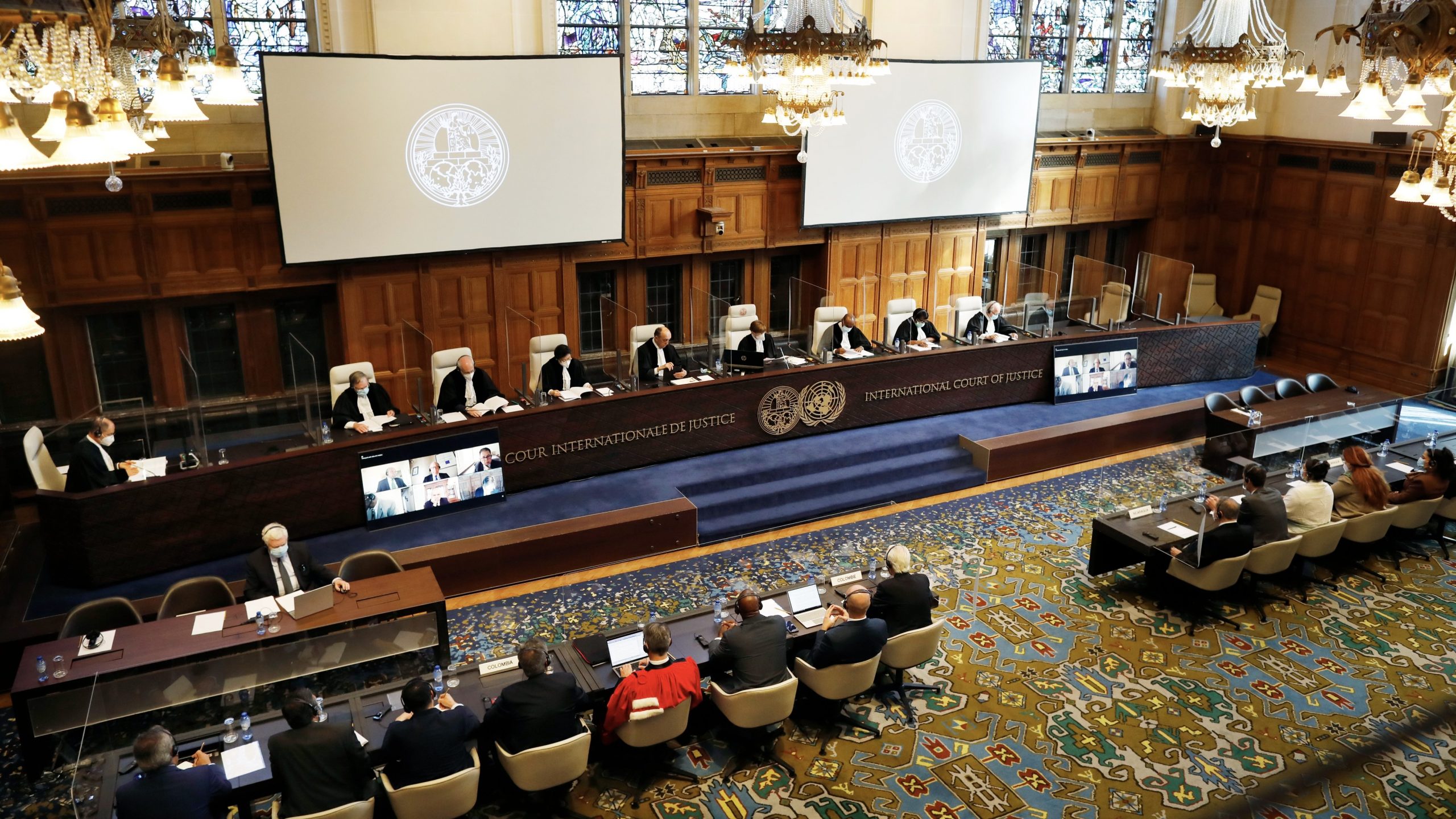 The International Court of Justice (ICJ), on April 21, ruled that Colombia violated Nicaragua’s sovereign rights by interfering in parts of the Caribbean sea that are within Nicaragua’s exclusive economic zone. Photo: ICJ/Twitter

The International Court of Justice (ICJ), on April 21, ruled in favor of Nicaragua and against Colombia in a maritime case called “Alleged Violations of Sovereign Rights and Maritime Spaces in the Caribbean Sea.” With ten votes in favor and 5 against, the majority of judges at the ICJ sided with Nicaragua, ruling that Colombia violated Nicaragua’s sovereign rights by trying to control fishing activities and interfering with maritime research in parts of the Caribbean sea that are within Nicaragua’s exclusive economic zone. The United Nations’ court, by 9 to 6 votes, also ordered Colombia to immediately cease patrolling and other activities in Nicaraguan waters.

“The Court finds that Colombia has breached its international obligation to respect Nicaragua’s sovereign rights and jurisdiction in its exclusive economic zone by interfering with fishing and marine scientific research activities of Nicaraguan-flagged or Nicaraguan-licensed vessels and with the operations of Nicaraguan naval vessels, by purporting to enforce conservation measures and by authorizing fishing activities in Nicaragua’s exclusive economic zone. Colombia’s wrongful conduct engages its responsibility under international law,” stated the ICJ.

READ HERE: the summary of the #ICJ Judgment in the case concerning Alleged Violations of Sovereign Rights and Maritime Spaces in the Caribbean Sea (#Nicaragua v. #Colombia) https://t.co/nSkjA9chal pic.twitter.com/HhEo9PIpII

For decades, Nicaragua and Colombia have disputed the sovereignty of the Archipelago of San Andrés, Providencia and Santa Catalina in the Caribbean sea. In November 2012, in a case known as “Territorial and Maritime Dispute”, the ICJ granted Colombia sovereignty over the islands and drew a demarcation line, which extended Nicaragua’s maritime space and reduced the expanse of sea belonging to Colombia. The new sea borders increased Nicaragua’s continental shelf, giving it access to underwater oil and gas deposits, as well as fishing rights in those waters.

Following that ruling, Colombia said it would not recognize the court’s jurisdiction on border disputes. In September 2013, former Colombian president Juan Manuel Santos issued a decree that established a zone around Colombian islands in the disputed area, allowing security forces to oppose any attempt by Nicaragua to extend its sea frontier toward Colombia. In November 2013, Nicaragua filed a new lawsuit in the ICJ, accusing Colombia of not complying with the ruling issued a year ago.

The judges, on Thursday, also ordered Colombia to amend the 2013 presidential decree, considering that the establishment of an “integral contiguous zone” by Colombia contravenes customary international law.

Upon hearing the ICJ’s ruling, Colombian president Iván Duque warned that his administration would not allow Nicaragua to limit the rights of his country in the Archipelago of San Andres, Providencia and Santa Catalina. Regarding the 2012 ruling, he reiterated that any change in national boundaries must be approved by the Congress, after a bilateral treaty with Nicaragua, and therefore the ruling cannot be fully implemented. The far-right president celebrated that not all Nicaragua’s requests were granted. He said that the Colombian Navy, in accordance with international law, would continue to navigate in the Colombian exclusive economic zone to fight against transnational crimes and drug trafficking; the people of Raizal community, an Afro-Caribbean ethnic group, would able to continue fishing in the area; and the country wouldn’t have to pay any compensation.

Nicaragua had alleged that Colombia threatened to use naval force to back up its claims in the oil and fish-rich region, and demanded that Colombia should pay compensation to Nicaraguan fishermen who felt threatened. Colombia had denied the accusations, saying its naval presence in the region was due to other imperatives, such as the fight against drug trafficking and international maritime rescue.

In its counterclaim, Colombia accused Nicaragua of violating the rights of the Raizal communities that inhabit these islands and that practice artisanal and subsistence fishing. However, it was not admitted and the Court pointed out that Colombia failed to demonstrate that these communities have fishing rights in waters that are now under the jurisdiction of Nicaragua.

Meanwhile, Nicaraguan President Daniel Ortega celebrated the country’s victory in the ruling and described the verdict as “clear and irrefutable.” Referring to the statements of the Colombian President, Ortega said that Duque, instead of announcing his commitment to comply with the ruling, insulted and attacked Nicaragua. The socialist president said that his country hoped that they were just words and did not intend to violate an internationally recognized right. Finally, Ortega called on his Colombian counterpart to abide by the ruling and take steps in favor of peace and sovereignty.