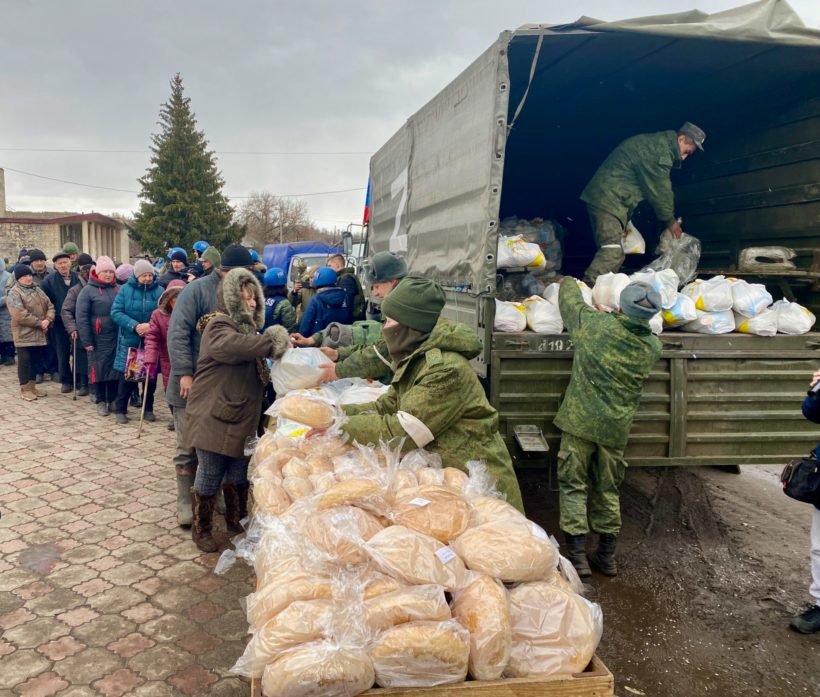 Soldiers of the Russian Federation Army provide humanitarian assistance to the population of Donbass.

The world’s media talk a lot about Ukraine. In the world market of news morbidity, we have an oversupply of war horrors, with many colours of death and only one very black and white political reading. This chapter of the eternal comic book about the eternal struggle between good and evil tells us about the heroic resistance (“of a dignified and sovereign country”) to the forces of the Russian demon surnamed Putin. The media tells the same old story over and over again for the sole purpose of telling us nothing.

One of the worst manipulations is to tell the world, as the so humble and pacifist US government does, about “unprovoked Russian aggression”. There is no war more provoked than this one, since the expansion of NATO, despite all agreements and promises and any political or geographical logic, a triple encirclement of military bases around Russia, an outrageous public and humiliating disregard for any Russian request to take into account, at least sometimes, its interests and security, and the creation of its main platform of provocations: the current Ukrainian government, which for years has legally equated fascism with communism, with the difference that neo-Nazi paramilitary groups are now not only masters of the Ukrainian streets, but also an official part of the country’s armed forces, but for wearing a cap with a hammer and sickle insignia you can be imprisoned for several years.

Nobody in the world is talking about the fact that for the last two months, men under 60 years of age have not been allowed to leave Ukraine, as their government sees them as cannon fodder, because President Volodymyr Zelensky assures that Ukraine is ready for 10 more years of war. There is also a government order that all Ukrainian men outside the country must be returned to Ukraine immediately, otherwise 10 years in prison awaits them. I don’t know how these accords with the principles of international humanitarian law, but the number of Ukrainians from outside and inside Ukraine who wish for an early fall of this regime should have increased a lot.

Nor was the world informed that the Azov battalion, among others like it, created from street paramilitarism and with a clear Nazi ideology, came under the command of the Ukrainian Ministry of Defence and is now part of its official armed forces.

The murders and torture of Russian prisoners of war in front of mobile phone cameras, in the best DAESH style, also do not faze the media world united against its new enemy. The media are busy “revealing” only the crimes of the enemy, although independent information from my personal acquaintances from Bucha and Irpen, casts serious doubts on the “definitive” and lapidary Western conclusion.

The international media do not tell that a few days ago in the city of Mariupol 1026 Ukrainian marines and among them 162 officers, 151 wounded, 47 women and a British mercenary Aiden Aslin were handed over to the Russian forces. Despite the strict prohibition of the Zelensky government, which needs more dead for its propaganda, these servicemen chose to live. On the outskirts of Mariupol is the huge Azovstal factory, which is practically an industrial city with its deep and complex underground part, one of the giant steel producers since Soviet times. On the territory of Azovstal are the main forces of the Azov battalion, together with other units of the Ukrainian army, with about 3,000 troops in total. It is said that among them there are about 400 foreign mercenaries and high-ranking military commanders from NATO countries. There are also very contradictory and speculative data about the presence of civilians and children in the factory, taken hostage by Azov. For weeks now they have been completely blockaded. Russia today, for the second time in the last few days, declares a ceasefire for their surrender, guaranteeing life for all. Azov paramilitaries shoot Ukrainian soldiers who are ready to surrender.

While in several Ukrainian cities Nazi “activists” and local authorities are destroying these days the memorials and monuments to the Soviet soldiers who liberated Ukraine from fascism in the Great Patriotic War, in the territories taken by Russia more and more Soviet flags are being raised as an informal initiative of the military and civilians, which reflects well the profundity of this struggle.

These days we saw a video recorded by a Ukrainian soldier on a phone. The Ukrainian army enters a village somewhere in the province of the country. They were going to distribute food to the civilians who spend days and nights under fire. An elderly couple comes out to greet them, mistakenly thinking they are Russians. The granny removes them a huge Soviet flag from the house and comes towards the soldiers. The soldier shouts: “Long live Ukraine!”, then takes the flag from her, throws it on the ground, steps on it and demands the granny to step on it too in exchange for bread. The granny gives him back the loaves of bread, scolding him: “my parents died under this flag…”. Now the image of the granny with the Soviet flag is a symbol.

Nor does the media report how the witch-hunt continues in Ukraine, preparing blacklists, kidnappings, torture and political assassinations. Any criticism or questioning of power can be an act of suicide. Politicians, journalists and ordinary Ukrainian citizens disappear from their homes and then appear on the lists of “enemies”, “exchangeable” for foreign mercenaries hunted by Russian forces.

NATO countries continue to fill Ukraine with weapons, making several daily flights to the border airfields. Everything possible and impossible is being done to convince Zelensky and Ukrainian society that their country is winning the war and that there is no other way out than the military one. For the first time, the US has authorised the sale of ballistic missiles to Ukraine, a weapon that is clearly intended to attack Russian cities. In the meantime, Russian border points are attacked with what is available.

Amidst the beautiful Ukrainian cities and vast Ukrainian countryside, there is no wish more longed for than peace. The word carnage is no exaggeration; tens of thousands of military and civilian deaths have already occurred. But there is a serious problem: the lack of an interlocutor. The Ukrainian government not only does not comply with the agreements but also changes its official discourse several times a day. Vladimir Zelensky decides absolutely nothing, he only obeys the real owners of the country, who already decided to turn Ukraine into an object of sacrifice. If a miracle happens and Ukraine as a country survives, several generations of its inhabitants will have to pay the astronomical debt for the “military aid” that is increasing by the minute. The USA made the best deal in its history: killing Russians with the hands of other Russians (proud to be Ukrainians), earning millions of dollars and making European governments more and more dependent on them. For now, Russian tanks with a few red flags tucked away somewhere in their memory continue to advance westwards.