Nato has announced an overhaul that involves a significant increase in Atlantic Alliance troops in Eastern Europe. Experts are convinced that Nato’s reforms will fundamentally reshape the security architecture in Europe and draw Russia and the West into a new arms race. Does the Atlantic Alliance’s initiative simply mean the risk of a direct confrontation with Russia?

Nato is developing plans to deploy large-scale standing military forces on its eastern borders with Russia, Nato Secretary General Jens Stoltenberg told The Telegraph in an interview on April 10. According to him, the Atlantic Alliance has entered the phase of “fundamental transformation” because of what is happening in Ukraine. On April 6, the Pentagon, together with General Mark Milley, the U.S. Chief of Staff, and Secretary of Defense Lloyd J. Austin III, considered the establishment of permanent U.S. bases in Eastern Europe. On the same day, British Foreign Secretary Liz Truss said that the 1997 Russia-NATO Founding Act did not correspond to the current situation in the world and its days were over. “The era of engagement with Russia is over,” she said at a dinner with NATO foreign ministers in Brussels. CNN recalls: “The law, signed in 1997, states that ‘Nato and Russia do not consider themselves adversaries,’ according to the original document.”

As part of a massive overhaul of Nato, the relatively small presence of troops on the eastern flank will be replaced by full military forces sufficient to repel an attempted “Russian invasion” of Atlantic Alliance member states such as Estonia and Latvia. Jens Stoltenberg noted that currently under his direct command in the eastern part of the Atlantic Alliance, there are already 40,000 military personnel – almost ten times more than at the end of last year.

“What we see now is a new reality, a new normal for European security. Therefore, we have now asked our military commanders to provide options for what we call a reset, a longer-term adaptation of Nato. I expect NATO leaders to make decisions on this when they meet in Madrid at the NATO summit in June,” said Jens Stoltenberg.

It should be noted that by then, the Finnish authorities will make a decision on the country’s application for membership in NATO. Last Sunday, Lithuania announced training for Ukrainians while the Chief of Staff of the U.S. Army was on site, reports Stripes, the website of the U.S. Army. Continental Observer learns that Lithuania will host a mission to train Ukrainian soldiers in the use of new weapons that the Baltic country’s other Nato allies are sending to Kiev to help it in its war against Russian forces. Stripes states, “The [Ukrainian] troops were trained in the use of maritime patrol boats and in the use of weapons systems, such as the Switchblade drone, which the United States is now supplying to Ukraine.” Again, the U.S. military site admits: “The United States has long been involved in training the Ukrainian military”; “For years, the [U.S.] military operated from a site in western Ukraine that focused on preparing troops to fight Russian-backed separatists in the eastern region known as Donbass.”

Interesting thing to note. Stripes confirms that the U.S. had planned these trainings before Russian troops entered Ukraine: “However, for security reasons, the U.S. training was suspended less than two weeks before February 24, when Russia launched its full-fledged invasion.” It should be recalled that Ukraine has organized military exercises with the United States, Poland and Lithuania in July 2021. Lithuanian Defense Minister Arvydas Anušauskas, accompanied by Thomas Hitschler, Parliamentary State Secretary at the German Ministry of Defense (Since 2017 Berlin is heavily engaged in Lithuania), said: “Lithuania, together with other countries of the eastern fringe of Nato, is seeking to strengthen the battalion battalions of the Nato front forces to the front brigades.

Nato forces are being consolidated near Russia’s borders in the Baltics with personnel, tanks, artillery and reconnaissance equipment. In addition, the Atlantic Alliance is preparing to deepen its cooperation with Finland and Sweden, which are still theoretically neutral. Observers believe that even the permanent transfer of American aircraft carriers to the Baltic is in the works.

In short, total war is declared against the new target of Nato: Russia. The arms race launched by NATO and the USA is taking place for the sake of peace and the lives of the inhabitants of the countries under the US and NATO’s military political control. Western politicians have decided to tear up the law, signed in 1997, stipulating that NATO and Russia do not consider each other as adversaries and therefore want to start a direct and frontal war against Russia. 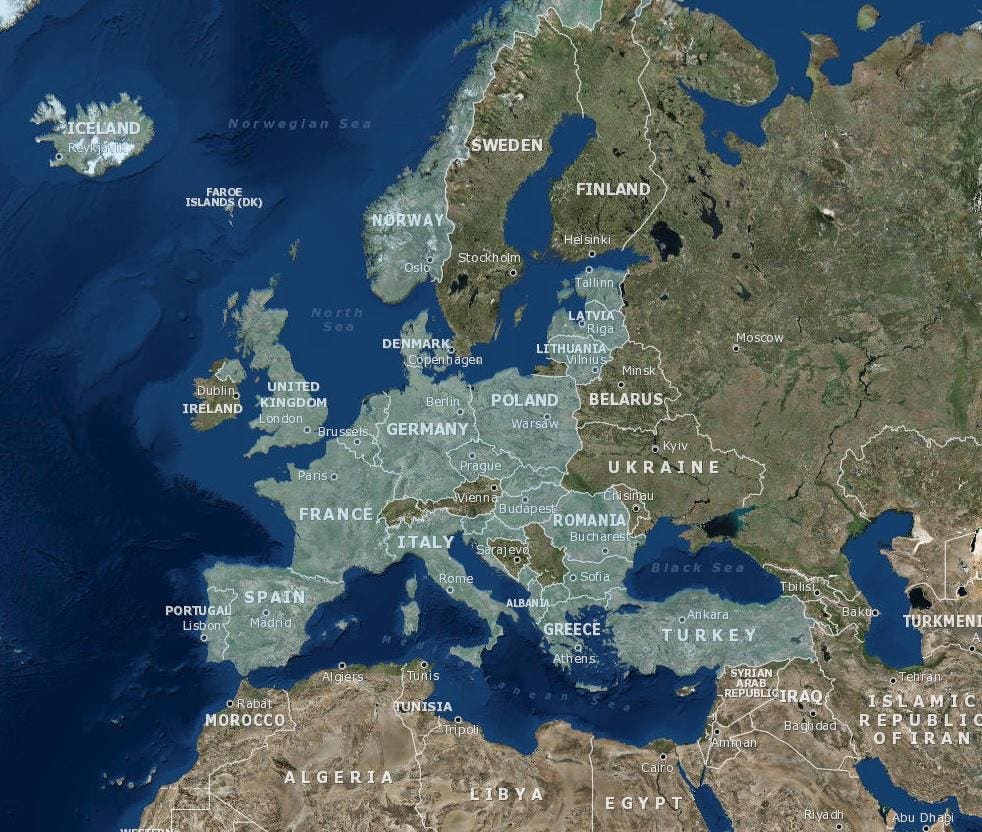 A map of NATO member countries (in light blue) arrayed in a crescent opposite Ukraine and Russia.  NORTH ATLANTIC TREATY ORGANIZATION

NATO is currently going through a process of reviewing its security architecture in Europe. The Pentagon, during an internal meeting, considered the future of the American presence on NATO’s eastern flank. General Mark Milley, the U.S. Chief of Staff, and Secretary of Defense Lloyd J. Austin III testified last Tuesday before the committee on the defense budget request for the fiscal year 2023. On that occasion, the establishment of permanent U.S. bases in Eastern Europe was considered.

And it is above all the declaration of war by the United States against Russia that jumps out at observers. Ukraine appears to be nothing but a proxy for US and NATO projects. With the huge American military investment in Ukraine since 2014 – as General Mark Milley states – we also discover the communication strategy employed by the secret services of which Volodymyr Zelensky appears to be the essential spokesman.

The decision will be finalized in June. “Our goal is to make sure that we continue to reassure our allies and partners, especially those on the eastern flank, and especially our allies in the Baltic area or the Baltic region,” said U.S. Secretary of Defense Lloyd Austin, who believes that the decision will be announced at the Madrid summit in June. The Pentagon said that “the United States already employs rotating units in the Baltic republics and Poland” and that “since the Russian invasion of Ukraine, others have been deployed in the Baltic countries, Poland, Romania, Hungary and Slovakia. At the last Nato summit in March, leaders agreed to review the position of the alliance’s troops in Europe.

Ukraine is an unofficial Nato partner. Defense Secretary Lloyd J. Austin III said at the meeting that he often spoke with his Ukrainian counterpart, Defense Minister Oleksii Reznikov. “We want to make sure that we meet their needs, and we provide them with the most useful things … to their fight,” he said, pointing out that the U.S. military brings weapons and other means to wage war. He also said that “the things we have provided them have been very, very useful in their efforts to slow down the advance of an overwhelming Russian force.

Thus, the United States and NATO are using Ukrainian forces as a proxy to wage war on Russia. Lloyd J. Austin III said that “anti-armor and anti-aircraft capabilities have been effective, as has the use of unmanned aerial vehicles. He added that “an unheralded capability is the use of secure tactical radios that has allowed the Ukrainians to maintain command and control during battles with Russian forces.”

Since 2014, the United States has been training the military and intelligence in Ukraine. Communication is the lifeblood of the war against Russia. It turns out that the U.S. military is behind Ukraine’s military actions and its strategy in communication. General Mark Milley stressed “the importance of intelligence and intelligence sharing”, that is, also communication. He – which informs about the real role of Volodymyr Zelensky – “congratulated the Ukrainian president for his leadership in the crisis”.

Volodymyr Zelenskya, in fact, goes around the parliaments of most Western countries, through the European Parliament and the UN and television to support the communication enterprise against Russia. At each stage, Volodymyr Zelensky adapted his speech according to the history of the country concerned in order to reach the listeners. He appears as the spokesman of the communication service of the American army and Nato.

General Mark Milley also emphasized the role of “captains, lieutenants and non-commissioned officers at the tactical level,” recalling a very important point: “Ukraine has been trained by the United States since 2014”; “And they personally gave me feedback saying that this training has been quite effective in terms of mission command concepts, distributed leadership at the subordinate level and the development of a corps of non-commissioned officers.

The most amazing thing about all of this is that the Pentagon itself publishes its relationship and ties to Ukraine on its website, which provides insight into Russia’s actions.