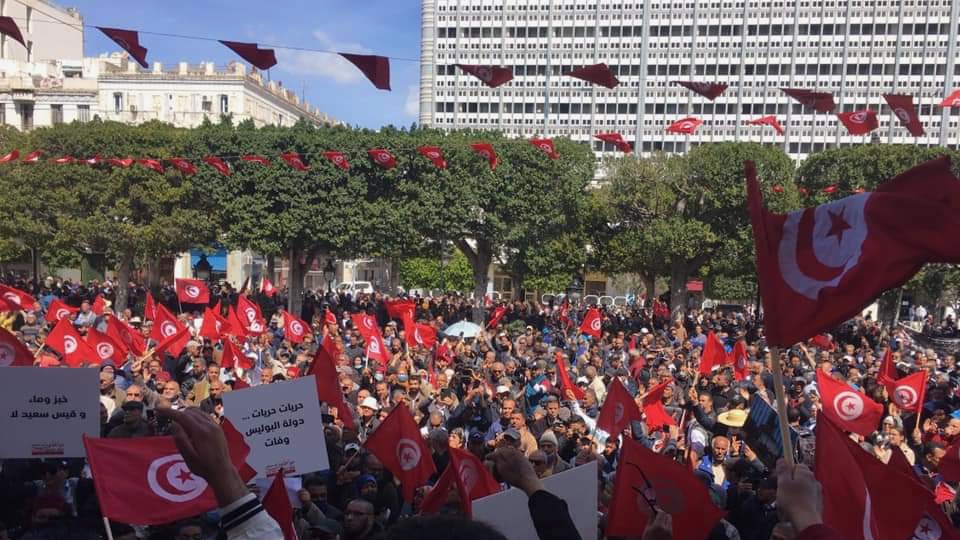 On Sunday, April 10, thousands of Tunisians took part in fresh protests against president Kais Saied and his ongoing measures to seize all power in the country. The protesters denounced the president’s unilateral arbitrary moves since last July as “unconstitutional” and “anti-democratic”. They also opposed the upcoming constitutional referendum and other reforms announced by him. President Saied wants to replace the post-revolution constitution formed in the years following the 2011 revolution against former dictator Zine El Abidine Ben Ali.

According to reports, between 3,000-4,000 protesters marched in the streets of capital Tunis, including on the prominent Bourguiba avenue, chanting slogans like, “Get out”, “the people want to dismiss the president”, “down with the coup”, “The people don’t want what you want” and “there is no democracy without legislative power”. Several protesters were seen waving the Tunisian flag.

The demonstrations were jointly organized by Ennahda, the biggest party in the now dissolved parliament, and Citizens Against the Coup, a civil society group formed after the president’s power grab last year to resist his takeover. News reports and several social media posts stated that the demonstrations went ahead despite a heavy presence of security forces and riot control personnel. Several security barriers were erected and severe restrictions were imposed on roads leading up to the capital to prevent more protesters from joining the demonstrations.

Similar protests have been witnessed in the recent past against the president’s actions even as he continues to introduce additional measures to consolidate his power. Last month, he dissolved the parliament after some members met in an online session and voted to declare his actions as “illegal”. Several parliamentarians who took part in the session, including the head of Ennahda Rached Ghannouchi, were later summoned for questioning by the anti-terrorism police.

Since July last year, President Saied’s extraordinary moves have plunged Tunisia into political uncertainty and crisis as he fired the prime minister, dismissed the government, suspended the parliament, and delegated all executive and legislative powers to himself. In the following months, he suspended parts of the constitution and gave himself additional powers to pass laws through issuing presidential decrees. In addition to the constitutional referendum, the president also announced general elections to be held in December 2022, to be conducted according to the new constitution. He subsequently dissolved the country’s top judicial authority, the Supreme Judicial Council, and replaced it with a provisional body whose members are to be appointed by the president himself.

Such moves have systematically targeted branches of government as well as independent institutions that could oppose the president’s authority, gradually bringing them under his control. The president also recently announced changes to the country’s voting system, a move bitterly opposed by parties across the political spectrum who have vowed to not participate in any elections held under the new rules or under a new constitution. Parties have also signaled their intention to boycott the referendum.

The opposition has claimed that all these arbitrary decisions were taken without any consultation with other political stakeholders or the broader civil society, which is also becoming increasingly vocal against the president’s actions. 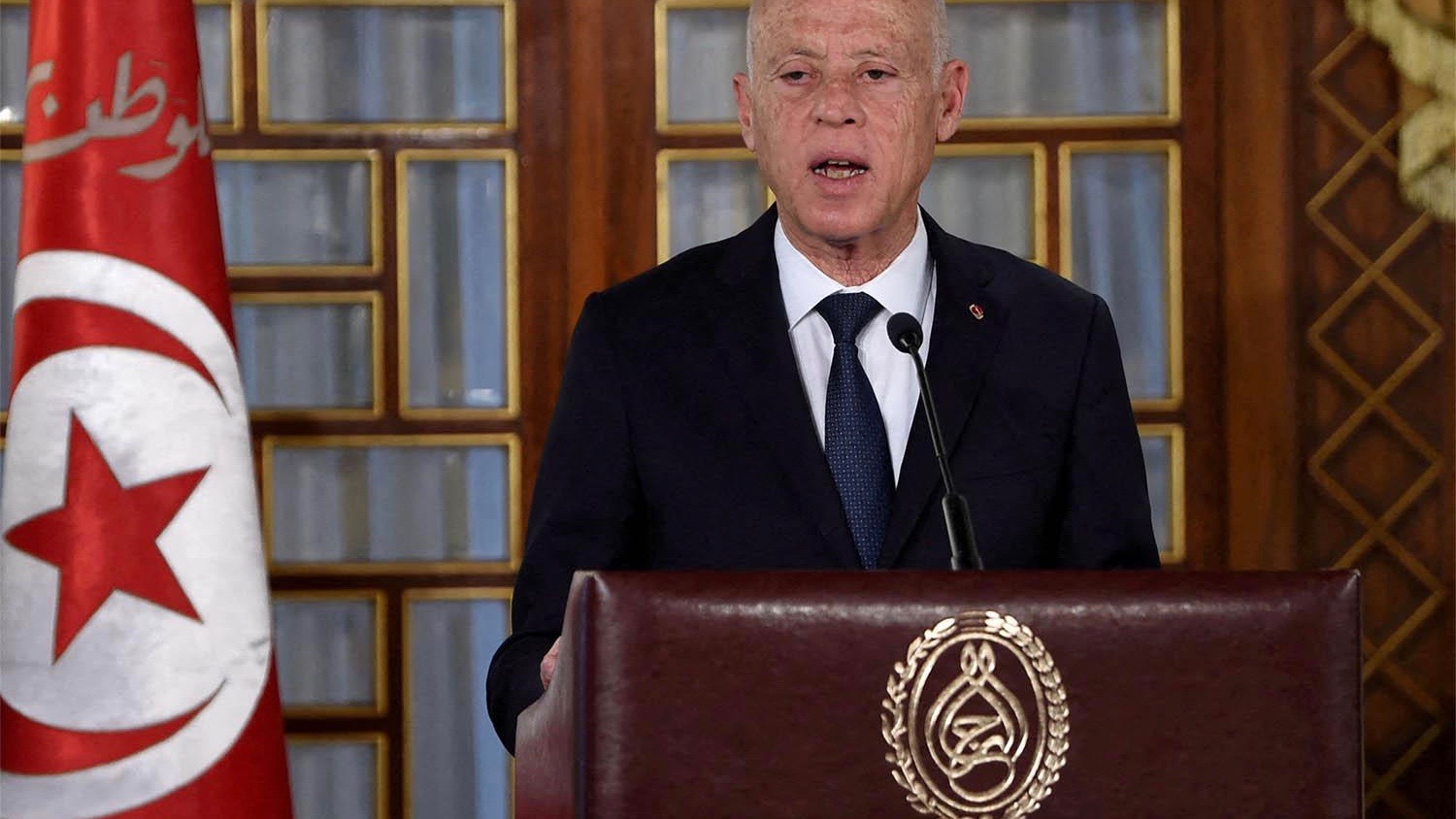 On Wednesday, April 6, Tunisian president Kais Saied introduced changes to the voting system for the forthcoming elections. The move is the latest in a series of unilateral arbitrary actions taken by the president without any consultation with other stakeholders in the country’s political process. The president had assumed virtually all legislative and executive powers in the country last July in what the opposition termed a “presidential coup”. He has since initiated several measures to alter the political and judicial systems established after the 2011 revolution against then president Zine El Abidine Ben Ali.

In his statement on Wednesday, President Saied said that the election will be held in two rounds and that the previous mechanism of voting for party lists will be done away with and replaced by direct voting for individual candidates. He said that the Independent High Authority for Elections (ISIE) will supervise the elections but its composition will most likely be changed. Currently, the ISIE has nine members and 27 branches across Tunisia, along with six overseas branches to serve Tunisians abroad – four in Europe, one in Canada and one in the United Arab Emirates.

The president also threw barbs at his political opposition, remarking that “dialogue with national organizations is the beginning and we will continue [it] with the parties, but there will be no dialogue with thieves and with the putschists, traitors and thieves.” He claimed that “conspirators will be forbidden from running” in the upcoming elections.

Commenting on the president’s latest move, Said Benarbia, Middle East and North Africa director at the International Commission of Jurists, said in a tweet, “the president is illegally and arbitrarily changing the rules of play, deciding who should play, and selecting the arbiter as well. Rampant, unbridled authoritarianism in full display.”

The leaders of Ennahda and the Free Constitutional party also expressed their intention to not participate in any referendum or elections that are held under a restructured system. Many others like the Citizens Against the Coup movement and the Tunisian General Labor Union (UGTT), the country’s biggest labor union, also denounced the president’s actions, including his most recent move to dissolve the national parliament after over a hundred parliamentarians met in a virtual online session and voted in favor of labeling all the president’s actions since last July illegal. Tunisian anti-terror authorities in the aftermath of the vote summoned several of the members for questioning for unconfirmed reasons. Among those summoned was Ennahda leader Rached Ghannouchi.

In July 2021, president Saied dismissed the prime minister and the entire cabinet and delegated virtually all legislative and executive powers to himself. Among the reasons he cited for the move was the country’s failing economy and the inept healthcare system that was struggling to handle the impact of the COVID-19 pandemic. He subsequently appointed a self-chosen interim government, gave himself the power to rule by decree, and suspended parts of the constitution, all in an effort to consolidate his position in power. In January this year, he announced the controversial decision to hold a referendum to bring in a new constitution, to be followed by general elections in accordance with the new constitution. The president’s moves have been condemned and opposed by all sections of society including political parties, activists, journalists, lawyers, judges, labor unions and the general public.