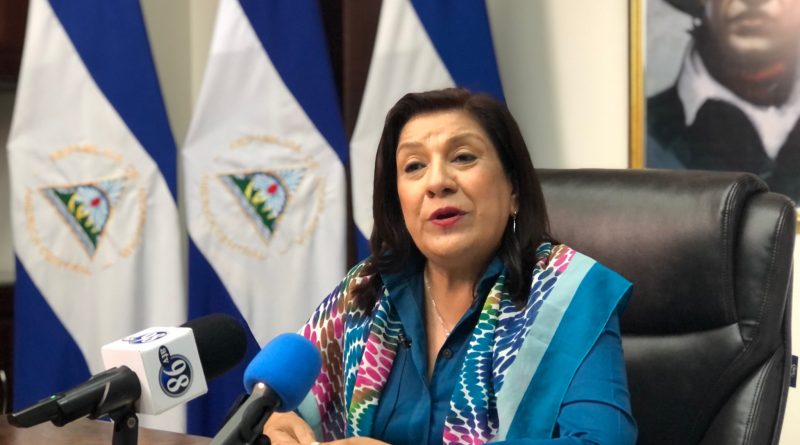 Nicaragua continues to lead by example in its commitment to equal rights among women and men and far outpaces the rest of the world with its exceptional achievements in realizing high levels of women’s participation in government.

According to the ILO, the country places first in the world for having the highest number of women ministers. Ministers of Education, Health, Economy, Justice and Labor are all currently women. Nicaragua is one of only three countries to have exceeded gender parity in its National Assembly, ranking third in the world in women’s representation in national parliaments.

Outside of the country, these and many other women’s achievements under the Sandinista Revolution have been deliberately under-reported.

Interview with National Assembly Deputy Irma Dávila, President of the Commission for Women, Youth, Children and Family Affairs of the National Assembly of Nicaragua, by Camila Escalante of Kawsachun News, Fiorella Isabel of the Convo Couch and Stephen Sefton of Tortilla Con Sal.

What does the Sandinista Revolution offer women under the presidency of Comandante Daniel Ortega?

Today, gender practice in Nicaragua is reflected at the highest level, namely in the Political Constitution; our gender practices are constitutionalized and have been put into practice. We work from a model of equity, a model of complementarity, of equality, of justice. And from our government’s vocation of peace and humanism, we have been working for the empowerment and leadership of Nicaraguan women in all areas of life, in the political, economic, social, cultural, community and family spheres.

Today, women in Nicaragua celebrate the fact that we are subjects of economic development. Today, we women contribute actively to the country’s economy. We are participants in the great economic, social and political transformations our country is undergoing. In this sense, we feel very proud to have a government that has taken on this commitment with great responsibility, because today Nicaraguan women have access to rights we did not have before.

Today, women have access to health care, which is one of the most sensitive issues. Nicaragua has reduced maternal mortality, maternal and infant mortality via our community and family health model. We have maternal shelters in all the country’s municipalities where the mother and their newborn are cared for by medical specialists during childbirth. Today, we have access to education; women have access to all the educational modalities they were previously denied.

Access to housing, we have access to land. Under this revolutionary government, land titles are given to women, who are heads of families too, and we also have access to credit so that women can develop economically. We have access to the means of production and are now included in the employment model and in the social, cooperative, associative economic model, working to contribute to the gross domestic product of this country and to the fight against poverty.

Today, we women have rescued our dignity. Women are respected in this country and proof of this is that we are in fifth place in the recent study by the World Economic Forum. It examined several countries and found that Nicaragua, a small country in Central America, in Latin America, occupies fifth place in gender equity, which means that today women have access to health, education, the economy and political participation, closing the gap of inequality and poverty.

From the United States, the idea is promoted that they are the most advanced in feminism, in what they call feminism. However, women there don’t earn the same as men. How is it possible that a Central American country, a supposedly third world country, has been able to do better than a great power like the United States and other countries?

This has to do with political will and here in Nicaragua we have the political will of our President and our Vice President, a real commitment to equal rights for men and women. We have a model of equity and of complementarity that has been made possible with the Revolution. That’s why Nicaragua surprises people, because we are not only in the fifth place as examined by the World Economic Forum, but also the ILO places Nicaraguan women in the first place in the world, where there is the highest participation of women as ministers. We have Education, the minister is a woman, Health, the ministers are women, in the Economy the minister is a woman, in Justice there’s a woman, and for Labor there’s a woman.

We are the first country in the world to have the recognition of having the highest participation of women in these responsibilities, but not only in office, but also in the National Assembly. In parliament, we have the recognition of being in the fourth place in the region with the highest number of women parliamentarians. Recently, those of us who have been elected, out of 91 male and female deputies, we have 46 women and 45 men. That is to say that just over 50% of the elected Assembly are women. Added to that, we occupy the presidency of commissions, vice presidency and women hold the majority of the executive board.

Women are making decisions, elaborating laws, policies, programs, evaluating, approving and working on economic laws, political laws, social laws, laws of all kinds. Nicaraguan women participated greatly in the triumph of this Revolution, then in the first stage of the Revolution, and again since returning to government in 2007. It’s not possible to advance in the fight against poverty if women are not present. You can’t talk about democracy if women are not present.

Well, in Nicaragua we have a good legal framework. First of all, the political constitution establishes the equality of men and women and non-discrimination against women. Then there are a large number of laws for the protection of women’s rights. An important law that we have in our country is the Law of Equal Rights and Opportunities, which establishes 50% for women’s participation in elections and 50% participation for men. This has been put into practice in all national, regional and municipal elections.

That is why today women hold in posts in the judiciary, more than 50% are women, 57% or 58%. Similarly in the executive, there is also a high participation of more than 56% of women in the legislative branch. Everywhere we have a high participation because the laws are put into practice, that is to say, they are not laws that are merely written, but laws that have actually been put into practice. This has also led us to reform the Law of Municipalities for there to be greater participation of women as mayors, vice mayors and councilwomen in local governments.

We have also reformed the Electoral Law so that there is also greater participation of all women in all political spaces. One very important law is the Integral Law Against Violence Against Women. Our model against violence is a model of prevention. This comprehensive law serves to prevents, attend to and outline punishment for everything related to the issue of violence.

Our Family Code has many provisions for Nicaraguan women, for girls and boys and also for the elderly. We also have international instruments that we have ratified, such as the Belem do Para Convention and the Convention on non-discrimination against women and non-violence. The legal system has also been strengthened now that a law has been passed to punish all hate crimes, crimes that harm the dignity of women.

Our government also works to promote values to protect women, through education, through prevention, through family counseling in neighborhoods and communities, through counseling in the educational communities where we work with students and with all the educators in schools. We have a very strong legal framework and we have to continue working for the protection of the lives of women and their rights.

What methods or what tools does the government have to help single mothers, to help low income mothers, and how does the family structure relate to this new stage, in this century of modern women, who occupy many roles and so on?

This government delivers 1,200,000 meals daily to all schools, to the countryside and in the city. They also receive healthcare in schools. At child development centers, the CDIs, women can drop off children to be looked after and educated so that women can work with piece of mind with a model that comprises all issues of food, health and education. Education here is totally free and children receive shoes, notebooks, backpacks, pencils, crayons, the supplies they need to perform their schoolwork. It’s an integral model and it’s worth mentioning that Nicaragua is recognized worldwide, by the FAO, as the country that cares best for children. We’ve reduced infant mortality and children are growing up healthier. They wont be drinking Coca Cola in schools, but rather the children are going to consume what may be available in the school gardens.

Our government recognizes this gender equity as an axis of human development. Therefore women’s rights are rights in and of themselves and also the axis of our country’s development. We feel very proud to live in this country and to have a President like Comandante Daniel and Compañera Rosario who don’t pass up on any opportunity to restore the rights of Nicaraguan women.

How do you respond to criticisms from the OAS and the United States that there is a humanitarian and human rights crisis in Nicaragua?

We’ve shown ourselves to be a country that has made great advances. We’ve made great progress and received great recognition for being country that has been reducing poverty and extreme poverty, from 48% to 24%. We are the safest country in Central America, with 99% of electricity coverage, and surprised many by successfully managing Covid and the country’s economy, without closing borders, all while continuing to work. Via the model of the Community, Cooperative and Associative Family Economy, we’re addressing the issue of production and achieving great economic growth.

We held dignified electoral process where we voted for sovereignty, independence, self-determination, and nobody can tell us whom we should elect or how to carry out our election because we decide the destiny of this country. Our country responds with great success, with great advances in human rights. We’re signatories to many international instruments to which other countries are not. We’re committed to human rights and the issue of women is a human rights issue. That commitment to human rights is why this government got the support of almost 3 million people in these recent elections. The destiny of this country is decided by the Nicaraguan people and we respond to criticisms with evidence, with work, with respect for human rights, for self-determination, for peace in this country.

What we want are two things: We want peace and we want to be able to work, men and women, in a complementary way, from a model of social justice, of equity, of equality, to continue to lift our country out of poverty, and second, we demand respect. Respect for our self-determination, our sovereignty, and our independence. Because here we Nicaraguans are the ones who make the decisions, with our constitutionally elected President and Vice President.

Thank you very much.

Thank you, on behalf of the entire National Assembly as a deputy, it is an honor to share with you our progress, it fills us with great pride and joy to share this progress with you because it is also your progress. Because as Nicaraguan women advance, so do you, from the different countries you come from, so a big hug for all of you and let’s move forward with this commitment, working hand in hand with all of you. Thank you for coming to share with us and get to know our country and our people.