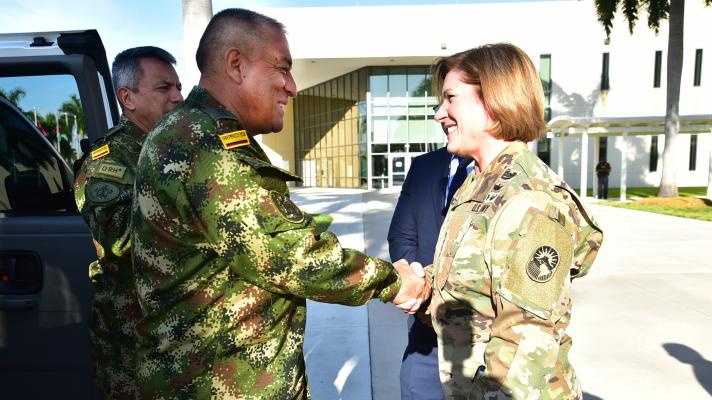 The U.S. Southern Command has been mobilizing in various spectrums of its low-intensity warfare in South America and the Caribbean. Since the beginning of the Russian Federation’s special military operation in Ukraine, the Pentagon’s wing for the region has shown signs of remaining active in its hegemonic will in relation to what it considers its “backyard”.

It should be noted that there is no generalized rejection of the Russian operation in the region, if we look at the declarations of the foreign ministries and the votes in the United Nations General Assembly on the subject. In fact, Russia has important cooperation ties in the Western Hemisphere with countries that the United States has on its radar of influence, for example, Argentina, Brazil and Mexico.

General Laura Richardson, head of that military command center, has expressed concern about the growing ties between the tandem of China and Russia, integral strategic allies, and many of the countries in Latin America and the Caribbean. Her position in this regard has been made clear in the last two testimonies given before the U.S. Senate Armed Services Committee in March.

On March 8, 2022, she presented her concern that “the People’s Republic of China, our long-term strategic competitor, continues its relentless march to expand economic, diplomatic, technological, informational, and military influence in Latin America and the Caribbean and challenges U.S. influence in all of these domains,” and compared the region to the influence (“negative,” according to U.S. argot) Beijing is having in Africa.

“Meanwhile, Russia, a more immediate threat, is increasing its engagements in the hemisphere as Putin seeks to keep his options open and maintain relations in our near abroad. In January, Russia’s deputy foreign minister said he could neither state nor exclude that Russia would send military assets to Cuba or Venezuela. Just days before Russia’s unprovoked invasion of Ukraine, Russia’s deputy prime minister visited Nicaragua, Cuba and Venezuela, countries that have close ties with Russia and offer Putin a foothold in our hemisphere,” Richardson told the Senate committee.

According to SOUTHCOM, “transnational criminal organizations” operating under a cloak of “corruption and violence” have “allowed the People’s Republic of China and Russia to exploit these countries.” According to the narrative spelled out by the State Department, Nicaragua, Cuba and Venezuela have allowed these “organizations” to consolidate in their territories, even if their respective governments are not themselves the protagonists of the aforementioned.

Therefore, Richardson demanded that “we must use all available levers to strengthen our alliances with the 28 like-minded democracies in this hemisphere that understand the power of working together to counter these shared threats”.

The Pentagon’s Latin-Caribbean arm is concerned that China is investing (they call it “extracting”) the equivalent of some $35 billion scattered in infrastructure and energy production in Argentina, Colombia, Cuba, Jamaica, Panama and Peru.

According to the 2021 report of the Economic Commission for Latin America and the Caribbean (ECLAC) regarding foreign direct investment, China remains the third largest investor behind the European Union and the United States, however, these two have reduced their share from previous years.

In Richardson’s testimony before the same Senate Committee on March 24, 2022, she stated that she is concerned about China’s economic presence in the region, as 21 of the 31 countries in the region are subscribers and signatories to the Belt and Road Initiative.

In addition, she insisted that greater investment is needed for security cooperation in three key areas: the training and capacity of armies and security forces for “border protection”, as well as for the “internal security” of the countries cooperating with the Command; the export of training “from other countries in Latin America”; and also in “peacekeeping operations around the world”.

In this way, it is possible to glimpse that the vision of the Southern Command is expanding towards the other latitudes of the rest of the globe, with China and Russia in the main sight as competitors and threats to the US hegemony, clearly in decline in all points of the planet, except in Europe and the western spectrum.

Air Force General Glen D. VanHerck, commander of the North American Aerospace Defense Command and U.S. Northern Command, testified on March 24 before the Senate that “Russia and China are spreading disinformation, actively sowing division and internal discord with the intent to undermine the foundations of our nation, our democracy and democracies around the world”.

Richardson further said that “Iran expanded economic and security cooperation with Venezuela, Cuba and Bolivia through fuel transfers, barter, basic foodstuffs and military assistance, reducing the effects of U.S. sanctions,” with the Islamic Republic being another threat posed by the multipolar initiative with a core in Eurasia. 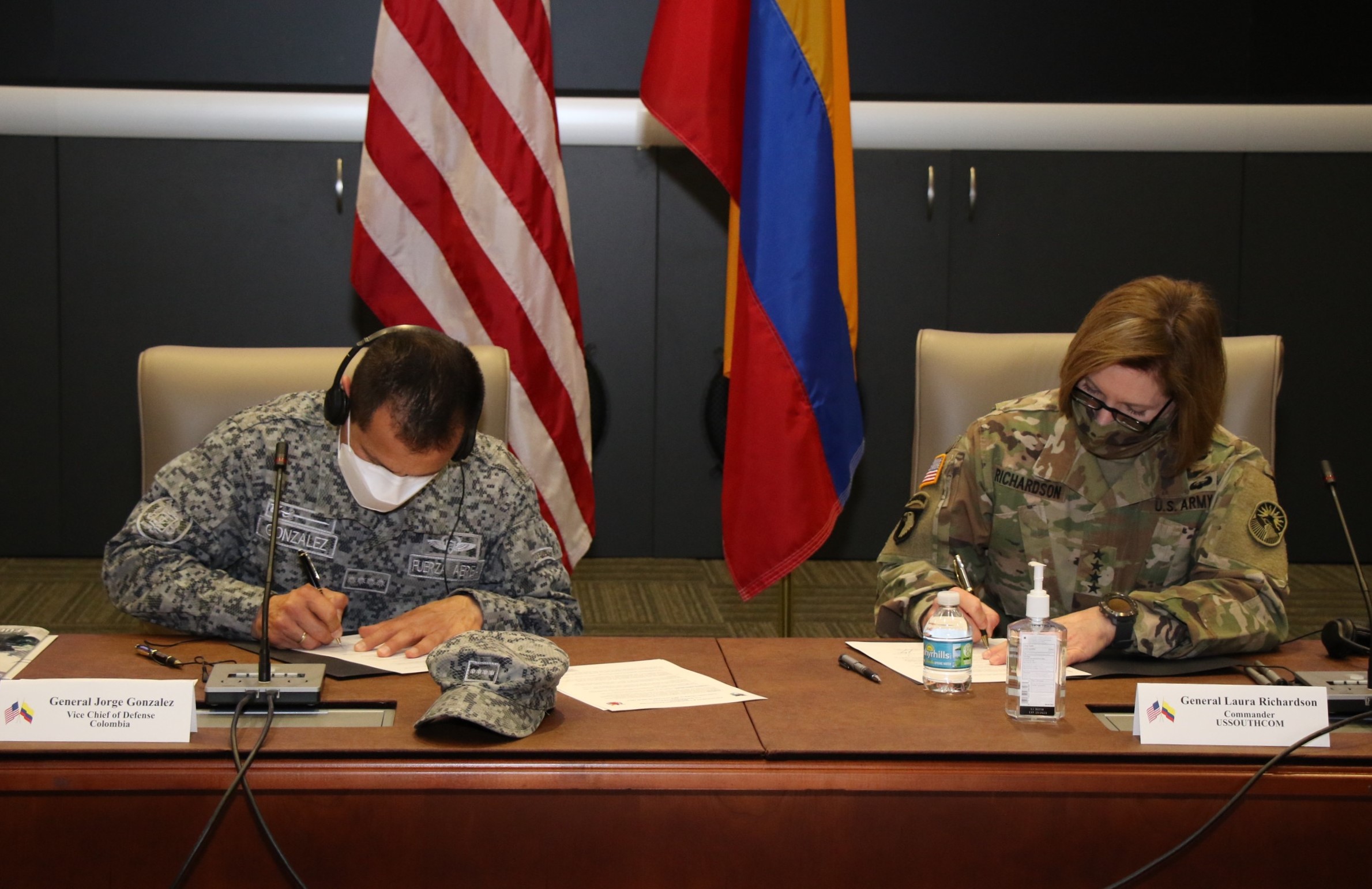 In 2019, the Southern Command published its strategy for the region having already directly identified the specific six forces it was going to antagonize most aggressively, and which have been mentioned in this article. The high command stated:

“China and Russia want to shape a world in accordance with their authoritarian order, and are undermining the principles of democracy, sovereignty, human rights and the rule of law. China employs harmful economic influence, Russia spreads disinformation to sow discord, and Iran has exported state-sponsored terrorism to this hemisphere. Cuba, Venezuela and Nicaragua-encouraged by Chinese and Russian support-further destabilize the hemisphere and threaten democratic governance.”

Considering that these three Latin-Caribbean countries are the ones that the Pentagon is paying most attention to in the region in order to carry out operations “in all areas, including special operations, cyber operations, information operations” (Laura Richardson dixit) with the objective of balkanizing the relations of these countries among themselves and among the Eurasian powers, we must point out the a activities that the Southern Command and its “friendly governments” have been carrying out in the territorial borders of these three States, which have been developing in an accelerated manner.

It is noteworthy that in the borders with Venezuela there are major operations, two of them of importance and one of them related to a violent event of high impact in Colombia.

Near Bogota, on Saturday night, March 26, there was an explosion at the Arborizada Alta Immediate Attention Command, in Ciudad Bolivar, an act that was described by outgoing President Ivan Duque as a “terrorist attack”. Immediately, the pro-Uribe mayor of the Colombian capital, Claudia López, requested “the Venezuelan government to identify, capture and extradite any member of the residual group of the 33rd Front of the FARC dissidents to answer for this cowardly and criminal attack”. The said guerrilla group has not claimed responsibility for the event, nor have the Colombian authorities provided reliable evidence that the government of President Nicolás Maduro is sheltering guerrilla groups in Venezuelan territory.

Almost immediately, on March 28, the head of the Southern Command received the commander general of the Colombian Armed Forces, General Luis Navarro. The press release of the command unit states: “Richardson and Navarro discussed defense cooperation between the United States and Colombia. Navarro also met with other senior leaders of the Southern Command and was briefed on the command’s mission and cooperation with the Colombian armed forces. For many decades, U.S. and Colombian forces have worked together during exercises, humanitarian assistance missions, professional exchanges and security operations to counter transnational threats.” By “transnational threats,” we know they mean, among others, the governments of Nicolás Maduro, Miguel Díaz-Canel and Daniel Ortega and Eurasian leaders.

Naval Forces Southern Command and the U.S. 4th Fleet conducted a maritime “anti-submarine warfare training” exercise with the Colombian Navy in the Caribbean Sea Feb. 27-28, which included the Virginia-class fast attack submarine USS Minnesota (SSN 783) and the Freedom variant littoral combat ship USS Billings (LCS 15). The Minnesota and Billings were joined by the Colombian Navy submarine ARC Pijao (SSK 28), the frigates ARC Independiente (FM 54) and ARC Almirante Padilla (FM 51), and Colombian helicopters and maritime patrol aircraft. Says a Southern Command press release, “The exercise served as a joint exercise with Colombia, in which both countries exchanged knowledge to maximize communication and understanding of each other’s shared tactics and procedures to facilitate the conduct of naval operations against emerging threats in the region.”

The Minnesota was conducting a homeport change from Groton, Connecticut, to Pearl Harbor, Hawaii. But the alarm was sounded, primarily because it is a nuclear-capable armed submarine, a unit that for the first time is taking part in naval military exercises in Caribbean waters in conjunction with a signatory country (Colombia) to the Treaty of Tlatelolco, which “prohibits the development, acquisition, testing and deployment of nuclear weapons in the Latin American and Caribbean region” and whose zone of application “is the sum of all the territories of the countries of Latin America and the Caribbean”. In this way, the Colombian State violated a treaty that was negotiated during the Cold War years, since “the Latin American and Caribbean States perceived that the possible intrusion of nuclear weapons would turn the region into a target of eventual nuclear attacks and would fatally provoke a ruinous arms race”.

In the border countries of Cuba and Nicaragua there have also been intense activities on the part of the Southern Command, although less significant in terms of intimidation and even violation of regional conventions.

Especially in Honduras. Since Xiomara Castro took the presidential reins, the Southern Command has strengthened cooperative ties with the Honduran military under various programs, General Laura Richardson met with the president, senior Honduran and U.S. military commanders signed a bilateral agreement under the Central American Task Force, a Joint Task Force established commitments with Honduran NGOs, and held training exercises with firefighters from the Soto Cano Air Base Squadron.

The relationship of military dependence of some countries in the region on the Pentagon is deepening at a time when U.S. hegemony is losing ground economically, financially, commercially and politically in other global latitudes. The political decisions made by Joe Biden’s administration to try to undermine Russia and China are not only being made in Europe and Asia, but also in Latin America and the Caribbean.

Under this umbrella, Venezuela, Nicaragua and Cuba are in the sights of the different operations that the Southern Command is carrying out both officially and covertly, especially in the Bolivarian Republic, which in the meantime has been dismantling camps, logistics and financing of the Colombian Armed Drug Trafficking Terrorist Groups (TANCOL) in the border states of Apure and Zulia.

At the heart of the U.S. strategy is the balkanization of the entire region, since the division of its components is the strength of the United States, since it has greater room for maneuver to influence in the midst of the chaos. In this sense, the main pivots of Latin-Caribbean integration are under attack, even more so with the strengthening of the alliances of the “troika of tyranny” (as described by the warmonger John Bolton) with the emerging powers of the emerging multipolar world.