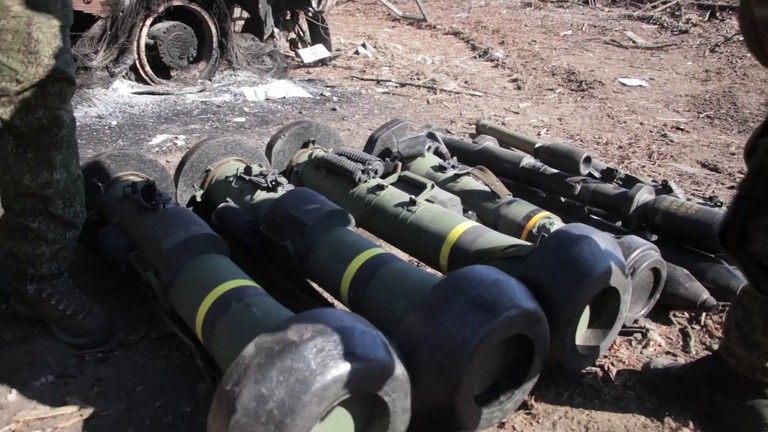 On March 15, US President Joe Biden signed a bill approving a staggering $13.6 billion in aid to Ukraine. Heavily promoted in advance as a vital lifeline to Kiev that would safeguard citizens, defend refugees, and protect “democracy,”references to the supposedly landmark move immediately vanished from the mainstream media following its White House approval, and have remained absent ever since.

One explanation for this informational deficit could well be that in reality, the legislation serves no tangible benevolent ends of any kind, in fact providing an effective blank cheque for proxy war, and untrammelled embezzlement by US government agencies and contractors.

This much is certain from a precursory analysis of the bill’s lengthy underlying text. The term “military” crops up over 350 times, “humanitarian” just 58. What’s more, almost half the headline $13.6 billion wellspring ($6.5 billion) has already been allocated – to cover the cost of weapons shipments to Ukraine and the buildup of NATO forces in January and February this year. In other words, before the war had even formally begun.

Organization for Security and Cooperation in Europe (OSCE) reports published in the weeks prior to the war commencing highlight some of the gruesome purposes to which this “lethal aid” may have been put. In one representative filing on February 18, its investigators documented how a kindergarten in breakaway Lugansk had been struck by shrapnel, while 20 children were being taught inside. Luckily, they all escaped uninjured.

The same report noted that, “in violation of withdrawal lines,” OSCE observers identified placement of surface-to-air-missile systems, howitzers, anti-tank guns and multiple-launch rocket systems in government-controlled areas of Donetsk. Neither this blatantly belligerent activity, nor the Organization recording how the overwhelming majority of missile and rocket attacks carried out in the days leading up to Russia’s military attack were targeted at breakaway areas by government forces, has ever been mentioned by a Western news outlet.

This may be partially explained by the US, UK and Canada pulling out of the OSCE mission in Ukraine in mid-February, allegedly due to fears of an impending Russian assault – another rationale for the English-speaking trio’s withdrawal could be that revealing the reality of egregious government abuses in Eastern Ukraine was problematic, and politically unpopular at home.

The mainstream code of silence on such crimes against humanity is no longer rigorously maintained. In fact, many current and former Western officials have been unabashed in confirming Washington’s overriding priority is arming Kiev to the teeth, to foment a protracted insurrection and trap Russia in a bloodspattered quagmire, in the manner of the Soviet-Afghan War.

This comparison was drawn favorably by US lawmaker Adam Smith, House Armed Services Committee chair, after legislation to establish a “Ukraine Resistance Fund” was recently drafted. Speaking to MSNBC on February 28, failed presidential candidate Hillary Clinton echoed his endorsement, stating “the model that people are now looking toward” in respect of the Ukraine crisis is the “armed insurgency [that] basically drove the Russians [sic] out of Afghanistan.”

Ironically, the Soviet invasion of Afghanistan was ordered by a Ukrainian, Leonid Brezhnev, back in 1979.

Washington’s shameful experience of funding, arming and training the Afghan resistance is much-venerated in modern US foreign policy circles today, despite the strategy creating the conditions that led to the tragedy of 9/11, on the alleged basis it was fundamental to the fall of Communism. However, many mainstream historians – and indeed the CIA’s then-Soviet Affairs chief – largely or completely discount the Afghan war as a factor in the Soviet Union’s collapse.

In its defense, the “aid” bill contains some protocols related to food and medical aid, although details on what will be sent to whom and where are troublingly unforthcoming.

The State Department is afforded lone responsibility for deciding every aspect of distribution, with no apparent obligation on the part of officials to publicly account for any allocations – raising the obvious prospect that the intended beneficiaries of this ostensibly humanitarian disbursement could well be soldiers, mercenaries or guerilla fighters.

Conversely, it could be that these projects are concerned with selling inflammatory, indirect US intervention in the Ukraine crisis to its own population, on a false prospectus.

This was very much the case with ‘aid’ projects during the two-decade-long Western occupation of Afghanistan, as a withering August 2021 official review of US reconstruction efforts in the country during that deplorable period made abundantly clear. The appraisal found the amount of money being spent on reconstruction projects, such as the creation of new hospitals, was “the most important measure of success” for US officials – rather than the projects being worthwhile or even remotely viable.

In turn, false claims of those projects’ ‘success’ were then fed to US lawmakers and citizens in order to convince them that Washington’s ongoing, costly presence in Afghanistan wasn’t the total, counterproductive failure it actually was. This “institutional drive to produce good news stories” produced a situation in which Washington spent money “faster than it could be accounted for,” so as to generate positive press coverage “as quickly as possible.”

As part of this cynical push, representatives of the US Agency for International Development (USAID) were frequently “bulldozed” by their military counterparts into pursuing projects in areas of Afghanistan “far too dangerous for them to have a stabilizing effect.” In essence, the bigger the associated risks, the greater the ‘success’ that could be claimed.

The Agency was therefore forced to depend on contractors, and “sometimes unable to establish with confidence even the most basic information” about a project’s progress as a result. Despite this, USAID’s reliance on these external actors endured unabated, creating a cottage industry of companies willing to defraud the Agency, and suppliers eager to help them do it.

On the subject of USAID, the organization is frequently referenced in the new aid bill, for example sharing a $145-million slush fund of “aid to independent media, journalists and civil activists” and counteract “disinformation and provide factual data about the situation in Ukraine” with the US Agency for Global Media (USAGM), parent of the CIA-created state-run outlets Radio Free Asia and Voice of America, among others.

USAID’s status as a “humanitarian” organization has long-been questioned, with many charging that it acts as an effective CIA front. A proposal published by the Agency’s internal “global development lab” in February 2019 should surely put to bed any doubts that it doesn’t.

The paper advocated for USAID staffers to be trained as special operations forces in order for them to effectively and intimately collaborate with military and intelligence agencies, so they act as “super enablers” and optimally serve US “national security” interests through “a mix of offensive, defensive, and stability operations in extremis conditions.”

With the US spending more on defense than the next 11 countries combined, and the White House having just requested a $31-billion war chest for the 2022/23 financial year, bringing the total budget to $813 billion, it’s no wonder Washington only views matters through a military lens. It has no other choice.