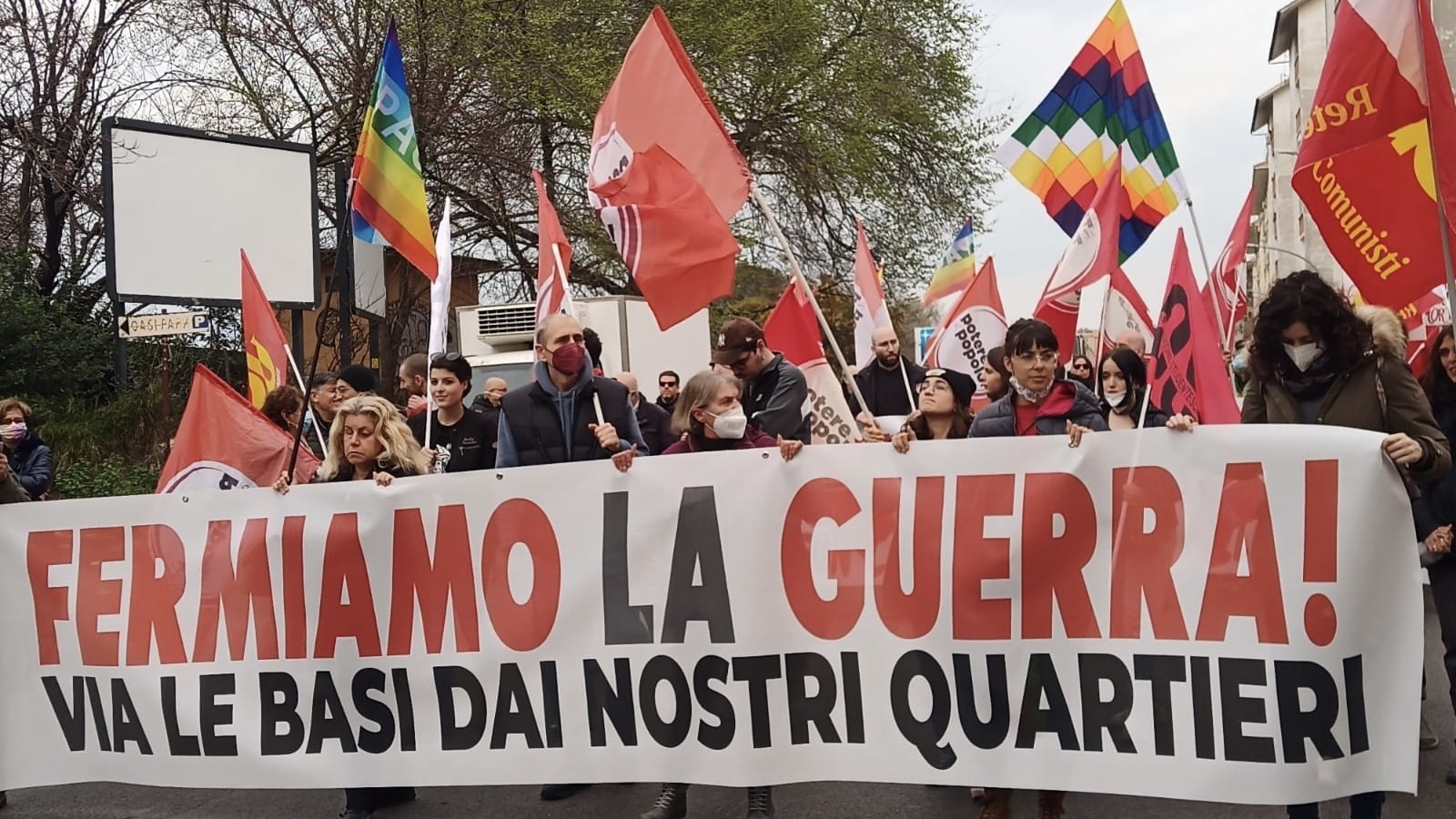 The offensive military alliance has been at the heart of the ongoing conflict in Ukraine, which has led many to question the alliance itself and what it means to be part of it. Giuliano Brunetti of Potere al Popolo talks about the Italian left’s perspective

Thousands have taken to the streets across Italy to protest against NATO and call for peace as the war in Ukraine completes its fourth week. At a time when governments have focused only on condemning Russia for the current situation, left activists have sought to point out the pivotal role of NATO in escalating tensions between the two countries in the days prior to the Russian invasion. Now, instead of calling for peace and diplomacy, it is fanning the flames of war.

Questions have also been raised about the role of NATO historically. Many reject the claim that it is a defensive military partnership and argue that it is a tool of US domination in Europe and across the world, pointing to its direct involvement in the destruction of Afghanistan, Libya, Yugoslavia, and other countries in helping maintain US hegemony.

The anti-NATO sentiment surging across Italy today builds on decades of longstanding struggles against the alliance and against the imposition of the US model of militarism and its foreign policy. Italy’s aggressive response to the war in Ukraine is directly shaped by its allegiance to NATO and the US and seemingly is against the pacifist will of the people.

Arms and sanctions, escalation of war

Following the Russian invasion of Ukraine, Italy pledged that it would work with its “NATO allies to respond immediately, with unity and determination”. It proceeded to announce on February 26 that it was joining the European Commission in imposing economic sanctions such as cutting off Russian banks from the SWIFT system, placing restrictions on the Russian Central Bank, issuing targeted sanctions against individuals and entities, and declaring it would combat “disinformation and other forms of hybrid warfare.”

On February 28, Prime Minister Mario Draghi proposed a decree to send “military vehicles, material and equipment for the Ukrainian government,” joining the efforts of other NATO countries to pour fuel on the fire. The decree was approved by the parliament with almost complete unanimity, with the exception of a small minority of MPs including Matteo Mantero of the left-wing party Potere al Popolo. Talking to Peoples Dispatch, Giuliano Brunetti of Potere al Popolo pointed out that “apart from those isolated voices, all the political parties of the establishment agree with the sending of weapons to Ukraine.”

Leftists and progressive groups have warned about sending weapons to Ukraine and several protests have even been organized in the ports to block the shipments. Brunetti said that sending weapons could lead to a dangerous outcome as “we have absolutely no idea who is going to get those weapons.”

While the Italian political establishment has fallen in lockstep with NATO orientations, in addition to opposition from progressives, some members of the Italian military have voiced concern. “Leaders of the Italian army are opposed to sending weapons because they know perfectly well that those weapons are useless and actually we are creating the conditions for a further bloodshed in this situation,” Brunetti highlighted.

The impact of Italy’s participation in NATO has consequences far beyond those seen today in its response to Ukraine. Its very entrance into NATO was part of the post-WWII strategy of the US to subordinate its former enemies in order to keep them out of the sphere of influence of its former ally, the Soviet Union: “Aside from  Italy’s strategic position in the Mediterranean, the power of the Communist Party was the main reason for the  American involvement in Italy. The United States did not want to lose a strategically placed European country to the Soviet Union.”

NATO itself acknowledges that the Communist Party, which was consistently against NATO, “played a pivotal role in the Resistance during the Second World War and was the second largest political party in the post-war period.”

With the victory of the conservative Christian Democrats in the 1948 elections, the US achieved its goal and on April 4, 1949 Italy was one of the 12 countries that signed the North Atlantic Treaty that led to the formation of NATO.

As part of its commitment to NATO, Italy has become a strategic military staging ground for the US military. Over the past several decades, at least seven US military bases have been established in the country, as well as over 100 US military installations. The strategic command of the Sixth Fleet of the US Navy that controls all of the Mediterranean Sea is located in Naples, in the south of Italy. Sicily is home to high-tech systems of the US Military and on the island of Sardinia, the US military tests artillery, including uranium bullets that are harmful for those handling them and for those that live in the surrounding areas.

This has converted Italy into a launchpad for military aggression. Brunetti said that “Italy has been used during the last decades as a giant airfleet carrier for NATO missions against other countries. For example, when NATO bombed Yugoslavia in 1999, the strategic bombers took off from Italy.”

Additionally, the country has become a hosting ground for part of the US’ vast arsenal of nuclear weapons despite Italy itself being barred from producing them. This has been a major point of friction especially given the mass anti-nuclear movement in Italy in the 1980s. “Even though we voted to close nuclear plants in a referendum, we still have nuclear warheads on our soil,” Brunetti said.

Italy’s role as a subordinate partner in the alliance means that Italians have more in common with those that NATO attacks than those that control it. The 20 victims of the Cermis massacre who were killed by two reckless US Marine Corps pilots from NATO’s Aviano Air Base, were denied justice as the pilots were whisked off to a US military court and found not guilty.

Brunetti noted that “We see NATO not as a defensive alliance, but actually as the boot that is stomping on the heads of the people across the world. It’s an instrument for the domination of the oceans by the United States of America, and we would like to be liberated from this military occupation.”

The political reaction of the Italian state to the war in Ukraine reflects the overall pattern of the Italian political class’ subservience to NATO. Brunetti criticized the fact that “all major political parties from center left to center right (including the extreme right that is supposedly nationalist and in favor of the nation’s interests), accept the fact that Italy is a NATO member and do not even consider the possibility of leaving NATO.”

In addition to having its territory occupied by US and NATO military installations, troops, weapons and more, Italy has specific political and economic responsibilities to fulfill as a member. One of these is that 2% of the national GDP has to be spent on defense, such as the arms and weapons industry. When NATO launched its invasion of Afghanistan in 2001 and of Iraq in 2003, Italy was not able to have an independent position, but was obliged to take part in the invasions “against the will of millions of Italians.”

Brunetti said that “the mood of the Italian population has always been pacifist and of neutrality due to our history of the fascist dictatorship and having had colonies. But this pacifism is unfortunately impossible under the NATO umbrella.”

This lack of alignment between the will of the people and the actions of the ruling class is due to the loyalty of Italy’s elite class to Atlanticism. For Brunetti, this concept refers to “the special link, the special relationship that we as Italy have, not with the ordinary people of the United States, but with the ruling elite of the United States, the warmongers, the genocidal elite and so on.”

While liberal and conservative pundits have used the war in Ukraine to emphasize the importance of NATO and its centrality in defending countries across Europe, the struggle to denounce the alliance and its attacks against the people of the world intensifies.