This women’s day let us remember the contribution of women who have been fighting the settler colonial Israeli regime. From the river to the sea, Palestine will be free!

Seldom has a gun wielding female soldier not been sexualized in pop culture or otherwise. Instagram is filled with accounts dedicated to conventionally attractive women serving in the IDF. On the other side, the women’s narratives of lives under occupation are virtually absent. How does a Palestinian woman revolt? How do they resist? Is existence in itself resistance? Or is resistance armed- does power have to flow from the barrel of the gun? In an interview, when asked why Palestine won’t enter a ‘peaceful’ dialogue with Israel, Ghassan Kanafani retorted saying “You mean surrender talks … This is a kind of conversation between the sword and the neck.” This is enough to highlight the imbalance of power- Israel has a sophisticated army now and Palestinian resistance consists of Hamas and children throwing rocks at the IDF soldiers. As a feminist, I do not want to speak on behalf of Palestinian women. I also realize that Palestinian women as a category isn’t homogenous as they have varied experiences of living under occupation. But I do espouse the universalization of a crisis and thus, offer a peek into a facet of the resistance. 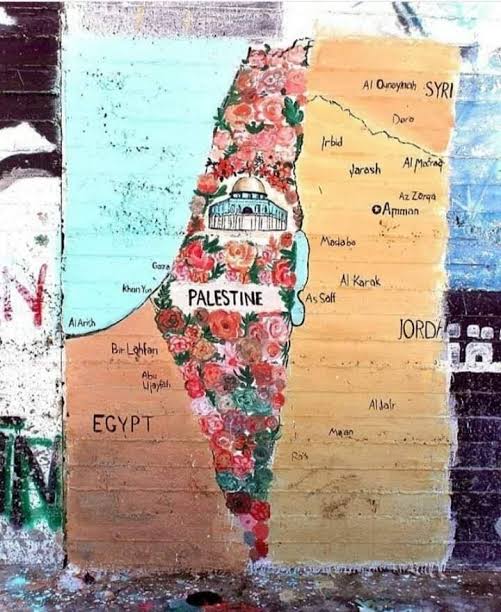 Though a clear cut case of settler colonialism, the Israel- Palestine conflict has been framed around indolent binaries- progressive Israel vs Barbaric Palestinians, Woman friendly ‘feminist’ Israel vs regressive Palestine. A false dichotomy between modern vs traditional routinely makes its way in the discourse on Palestine. The question here becomes obvious- why would Palestinian women resist Israel, which clearly wants to emancipate them from the shackles of Patriarchy? Why would Palestinian women want to side with Hamas, which wants to control women? (It is horribly erroneous to equate Palestinian resistance with Hamas). Here, it becomes extremely important to strip Israel of its progressive veneer. Israel sure is progressive- for its own people, rights for the settlers is accompanied with complete dehumanization of the Palestinian other. As far as lives under occupation are concerned, the contradiction between the settlers and the natives is the primary, dominant contradiction; any impediments that Palestinian men pose to Palestinian women is a secondary contradiction when Israel leads the unbridled slaughter of Palestinian lives. And it is precisely this reason why Palestinian women have been a vocal force in the resistance. Palestinian women are not fighting the ‘modernism’ of Israel, they’re fighting against brutal take over of their lives. Israel DOES NOT liberate Palestinian women. It thrives on taking over their land. There has been a negligible increase in the labor participation rate for Palestinian Arab women over the years. In fact, Suheir Abu Oksa Daoud opines that the marginalization of Palestinian women is a direct consequence of Israeli state policies that hinder Palestinian women’s access to the paid labor force, while the massive confiscation of their land removes the possibility of continuing their traditional agricultural work. Furthermore, for Palestinians working in settlements, being ‘political’ at workplace wound amount to losing one’s work permit from Israel’s Civil Administration. Dr Mariam Saleh, an elected Hamas member of the Palestinian Legislative Council famously said that staying in Palestine, looking after one’s community through social work is also a form of resistance. This does not mean that Palestinian women are not bogged down by the Patriarchy. What is resistance then? Everyday existence is resistance when a state like Israel seeks to eliminate all Palestinians. For Israel to be created, Palestine had to be imagined as terra nullis. Oh! The horrors of having to tell the Palestinians to scoot over and make room for the settlers. Elimination became necessary when Palestinians resisted to this brutal uprooting of lives as they knew it. They were confined into shoddy, overcrowded enclaves. Palestinians are trapped, Gaza is an open air prison- the checkpoints are an addition to their systematic dehumanization. Is this in any way an indication of Palestinians lacking agency?

In the 1960s, the heyday of revolutionary spirit all over the world, Palestinian resistance aimed at regaining their homeland by all possible means. Women not just stood by men as they fought for liberation, they also carried arms to liberate their homeland. Liberation movements back then were undoubtedly secular as religion was not an important factor.

Palestinian women have articulated their anguish, trauma and pain of living under occupation. Their lives are an intersection of colonialism and patriarchy. While the likes of Rasmea Odeh and Leila Khalid dedicated their lives fighting occupation, the former suffering unimaginable horrors at the hand of her Israeli captors, even the women who did not arm themselves are resisting. During the intifada, it was women who set up alternate centers of learning and also participated in mass scale protests. The intifada was pivotal in women taking up more roles in the society, it dispelled the myth of a domesticated, subdued Muslim woman. Intifada helped Palestinian women gain a political voice of sorts, women were not just care givers and nurturers any more. They also found themselves as the head of the household, a role unquestioningly reserved for the patriarch. The checkpoints are a brutal reminder of the disposability of Palestinian lives. Israeli soldiers sexually assaulting Palestinian women is de rigueur, which only gives families the license to curtain women’s movement. Women are asked to stay at home and many are forced to discontinue their studies owing to the violence. Various ethnographers have notes that Palestinians normalize or routinize Israeli military violence through spatial, narrative and cultural practices. This also involves getting used to it.

Children growing under occupation are not shielded from the harsh realities of the same. Their routine encounters with the soldiers strip them off any semblance of a joyful childhood. Little Ahed Tamimi, whose bravery made ripples, was an unarmed girl when she was hauled into a notorious Israeli prison. She has been speaking vociferously on the plight of female Palestinian inmates, saying that they do not have access to even basic medical facilities. She also adds that menstruating inmates face more problems as their needs are not met. It is not a violent uprising that the Zionists fear, their fear is the world familiarizing itself with the necro politics of Israel and the consequent disregard for Palestinian lives. Why else would they imprison unarmed teenager?

Women have been leading protests against forceful evictions in Sheikh Jarrah and Silwan. While we have all heard about Mohammed El Kurd and his brave, confrontational interviews, his sister Muna El Kurd has also been by his side, resisting the occupation. Recently Muna along with her brother was arrested. Muna El Kurd dons a hijab, Muna El Kurd is brave. Who is to say she is any less fierce than feminists in the West? Mohammed El Kurd’s interview has been widely circulated on social media platforms; his sister remains relatively unknown. El Kurd says that her grandmother, who was deported from Haifa in 1948 taught her the true meaning of struggle and resistance. Asale Kasim Abu Hasna , facing the threat of deportation has also been at the front of resistance. The oppressed Hijabi trope must be put to rest if we are to have meaningful discussions on solidarity with the oppressed. The rhetoric of a male led resistance movement must be put to an end in progressive circles.

If one truly cares for Palestinian women, one must stop falsely equating Hamas being as bad as the Israeli regime. Palestinian women are free to resist as they please. They are not accountable to the West, which has time and again failed them. Solidarity has to be expressed without fetishizing women in uniform. For solidarity, one has to lend an ear and listen. It has become a tendency in the West to tell the oppressed how to resist. We are often left flummoxed with an imperfect resistance than an absolute ruthless occupation. The Palestinian struggle is an extension of the global anti imperialist struggle. While women worldwide struggle with double burden, under occupation the double burden is an addition to the animosity of the Israeli state. For women to be truly liberated, the death of imperialism is a necessity.