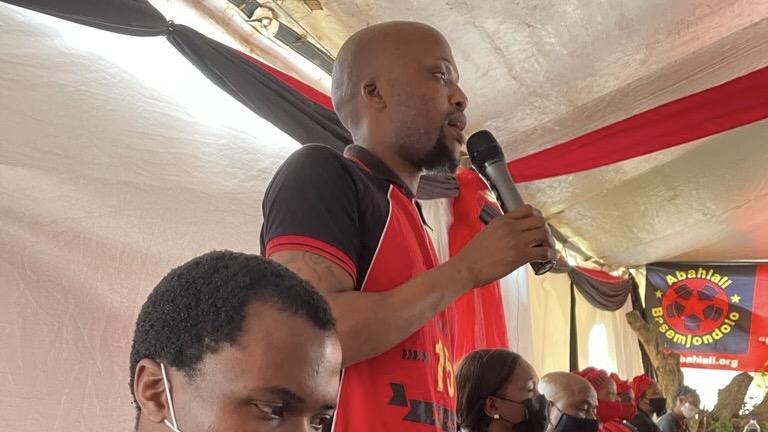 The 29-year-old deputy chairperson of Abahlali baseMjondolo’s eKhenana occupation was killed in Durban by four gunmen, allegedly led by the son of the local chief of the ruling ANC, against whom a police case had already been filed for an earlier attack on Sunday.

AbM Statement: Ayanda Ngila has been murdered at eKhenana

AbM’s national deputy president George Bonono, who immediately rushed to this occupation in Cato Manor, Durban, told Peoples Dispatch that according to witnesses Khaya Ngubane, the son of the local chief of the ruling African National Congress (ANC), N S Ngubane, was the lead gunman.

Ngubane allegedly led three other gunmen through the bush next to the occupation and shot Ngila several times behind the communal poultry farm.

“If the police had arrested Khaya Ngubane when we filed a case against him yesterday for leading another attack on the occupation on Sunday evening, Comrade Ayanda would have been with us. But they refuse to act against the ANC’s goons,” Bonono said. “So Ayanda Ngila is no more.”

Only two days before this assassination, on Sunday, March 6, eKhenana was a venue of celebration and defiance. 500 members of AbM convened their monthly general assembly at this flagship occupation, which prides itself in its communal projects for self-sustainability, such as a poultry, food farm and a tuck shop.

Along with training its members in running such projects, the Frantz Fanon school established by members also imparts political education about left ideology.

Despite repeated violent, armed demolitions of the shacks, attacks by hired goons, and arrests of the occupation’s leaders under charges proven to be fabricated, eKhenana has continued to thrive.

The reconstructed shacks that had been burnt down by goons, including that of eKhenana branch’s secretary Maphiwe Gasela, also twice-imprisoned, were inaugurated that day with applause and cheers from the residents.

Members hummed along and danced to a song composed by 27-year-old Lindokuhle Mnguni while in prison. Mnguni was also imprisoned with now assassinated Ngila and 33-year-old Landu Tshazi.

@abahlali_abm‘s Lindokule Mnguni at the General Assembly at the eKhenana Commune, home after his second period in prison on trumped up charges. He composed this song in prison.

Ngila, Mnguni and Tshazi, all of whom are leaders of AbM’s eKhenana branch, were blamed for a murder in Cato Manor and arrested in March 2021. They were released in September after six months in Westville prison, following confessions by the witnesses of the state that they had borne false testimonies.

Charges of conspiring to murder these witnesses, which were pinned on Bonono, Gasela and another member of the branch, Siniko Miya, who were arrested later in May that year, were also dropped in October.

On January 10, Ngila, Mnguni and Gasela were once again arrested, this time blamed for another murder. They were released on bail on February 22.

“In recent months there have been more than forty arrests of Abahlali activists on trumped up charges as the local ANC and the police have sought to crush the Commune. These cases range from public violence – which has been the standard bogus charge brought against activists since our movement was formed in 2005 – to more serious charges such as attempted murder, conspiracy to kill state witnesses and murder,” AbM said in a statement on March 8.

“Our country is already outraged with high levels of violence and crime, yet law enforcement agencies are used to crush and criminalize impoverished activists who are trying to build a just and peaceful society.”

Welcoming Ngila, Mnguni and Gasela back into the community after their second-prison term was among the main programs at the general assembly on March 6.

After the general assembly concluded at around 4 pm and members from other occupations and the national leadership had left eKhenana, Khaya Ngubane, and his sister and N S Ngubane’s daughter, Ntokozo Ngubane, led drunken goons into an attack on the occupation. Siniko Miya, who was imprisoned on false charges for six months last year, and another member of the occupation, Langa Mbunguzana, were allegedly attacked with an axe.

“They had to be rushed to hospital.. [They] are seriously injured because they could not fight back. If they did try and fight back they would have been arrested by now. Local ANC people are allowed to assault our members with impunity as they enjoy the protection of the police and ANC leadership,” AbM said.

“The ANC thugs also vandalized the entrance sign to the Commune and broke the windows in the communal kitchen. Once again, the police refused to attend to the scene while the assault was taking place,” its statement added, alleging that the police initially refused even to file a complaint, before giving in after sustained pressure.

Cato Manor police station did not answer the calls by Peoples Dispatch to seek comment.

Even after the complaint was finally filed on March 7 against Khaya Ngubane, the police did not arrest him, complained Bonono. Only a day later, he is alleged to have killed Ngila.

Minister of Police, Director of Public Prosecutions and the South African Human Rights Commission – before whom complaints have been raised about the misuse of police power – have all “failed to act”, AbM complained in its statement on March 8.

“Now Ayanda is dead. Another principled and committed activist has been murdered by the ANC,” read its next statement after the assassination. “Ayanda is a martyr in the struggle for land, dignity, freedom and socialism. His name will be celebrated around the world. We will ensure that his life is honored, and that his spirit lives on in our movement.”