Stop Calling the Truckers Racist. Many Black Canadians Support Them!

In fact, appropriate for the month of February, the trucker convoy is actually a Black history moment.

Liberal politicians and mainstream media corporations want you to believe that the trucker convoy in Ottawa is racist. The first line of attack on the truckers was to focus public attention on bizarre, still unexplained images of horrible Nazi and Confederate flags being waved at the protest. Prime Minister Justin Trudeau can barely do a press conference these days without mentioning racism, and Canada’s socialist political party, the NDP, even brought a legislative bill forward to ban particular symbols of hate.

“This is a story of a country that got through this pandemic by being united—and a few people shouting and waving swastikas does not define who Canadians are,” Trudeau told lawmakers recently, and his view is the only one you’ll see represented in Canada’s press when it comes to the Freedom Convoy. 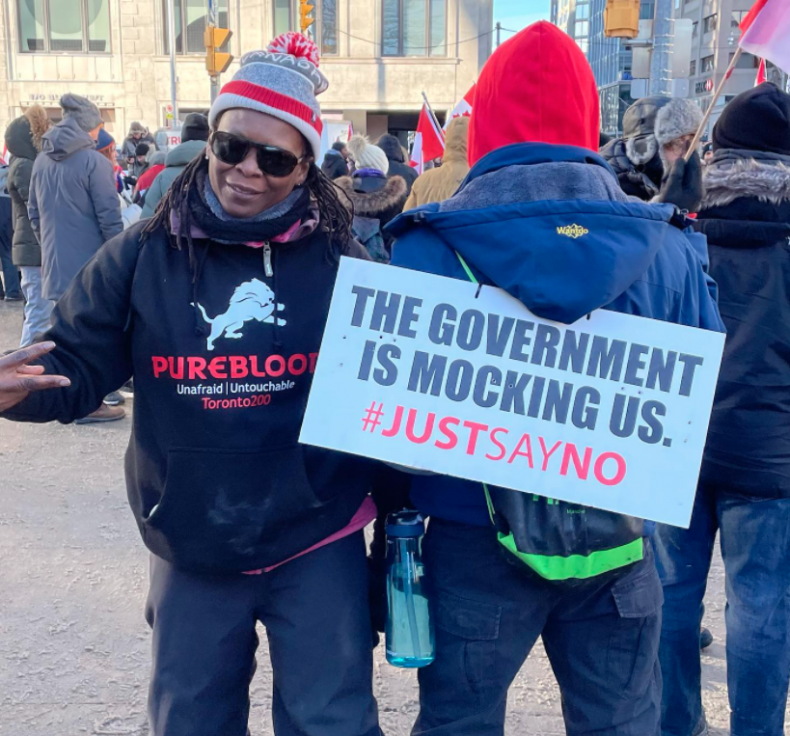 A photo from Toronto’s gathering in support of the Freedom Convoy, from the popular Instagram account poc4freedomconvoy. INSTAGRAM/POC4FREEDOMCONVOY

But they are wrong.

It will be uncomfortable for some to read this, but the truth must be said: We have no reason to believe the majority of truckers in the convoy are racist. In fact, appropriate for the month of February, the trucker convoy is actually a Black history moment.

Countless trucker convoy participants and supporters are Black. A popular Instagram account called “poc4freedomconvoy” (shorthand for People of Color for Freedom Convoy) with over 60,000 followers has documented the outpouring of support that the trucker convoy received from members of Black communities across Canada. The account’s first post is a picture of Chanceline Rukundo that reads, “I am Burundian/Canadian and I support the #freedomconvoy2022.”

I’ve seen dozens of other Black Canadians sharing videos and pictures demonstrating their support for the convoy, many of them pushing back against the divisive racism narrative being pushed by Trudeau and the media.

And though the media has largely pushed Trudeau’s line about racism, National Post columnist Rupa Subramanya, who lives in Ottawa, has documented the diversity of the trucker convoy. Subramanya’s Twitter feed is awash in images and videos of Black Canadians joining the protest with messages like “Hate is the real virus. Spread the love.”

Bari Weiss’s “Common Sense” newsletter recently featured Subramanya’s reporting on the diversity of the trucker convoy; as the Daily Mail summarized the report, “Rupa Subramanya spoke to close to 100 protesters. She didn’t find a single racist.”

Black people in the trucker convoy or supporting it might be a surprise to some if they’re getting their news from Canada’s liberal media. But it actually makes a lot of sense. The trucker convoy is primarily a response to vaccine mandates being imposed on working- and middle-class Canadians. The vaccine mandates have hurt Black families more than almost any other group in the country. Black communities in Canada, as in the United States, are disproportionately unvaccinated. Of course, Black men and women would want the mandates to end, and support a protest movement with such demands. Black Lives Matter itself joined an anti-mandate protest in the U.S.

Christian blogger and convoy supporter Samuel Sey, a popular Black Canadian writer, explained how his experience being marginalized due to his vaccine status is a familiar experience for Black people. “Though our governments supposedly lament segregating black people in the past—they’re threatening to disproportionately segregate us again through vaccine passports,” writes Sey. Sey also called out the hypocrisy of the woke Left: “Since critical race theorists have convinced our governments that racial disparities prove racial discrimination, shouldn’t they believe vaccine passports are systemically racist?”

Black communities in North America have tended to support Left-wing political parties. But expect that to change. It’s been conservatives pushing back against government overreach. And that’s why the largely conservative trucker convoy has the support of communities disproportionately hurt by public health restrictions.

Which brings me to Black History Month. The woke Left has long attempted to co-opt Black History Month to serve its political agenda. From media companies like the New York Times to school boards and universities, a narrative has been and continues to be advanced that defines Black men and women as victims in need of liberal saviors. With such a narrative in place, pessimism festers and cynical ideas like critical race theory can thrive.

But the original intention behind Black History Month was something very different. The founder of Black History Month, Dr. Carter G. Woodson, a West Virginia coal miner turned university professor, challenged the victimhood politics of his day. Woodson openly stated that in teaching black history, he hoped to “crown [Black Americans] as a factor in early human progress and a maker of modern civilization.” Woodson wanted Black communities to be understood as great contributors to their societies—not helpless individuals.

This year’s Black History Month is a chance to see that Black people are not merely victims of history, but makers of it—exactly as Dr. Woodson intended. The trucker convoy is an example of Black people playing a meaningful role in shaping their countries. Don’t let liberal politicians or mainstream media corporations convince you of anything less.

Jamil Jivani is a lawyer, policy advisor, and author of “Why Young Men.” You can find his writing at jamiljivani.substack.com.

Meet Gregory Moore from Detroit, a dual citizen. To him the vaccine mandates are reminiscent of Jim Crow laws in the US. He opposes mandates seeing them as a new form of Jim Crow. pic.twitter.com/MNYlm2GjkS

More from Gregory Moore. He also says he’s not a white supremacist. pic.twitter.com/9Kaqi15l7e

Another update from the Wild Wild West that is Ottawa. Earlier this evening, ran into Jamaican Canadian @CassiusJulius and his friend Brad who is half Indian half Pakistani (there’s unity right there). They say they’re not white supremacists. pic.twitter.com/JSKvecRjxI

An Indo Canadian, a Black Canadian and an Asian Canadian went to a protest…they're asking Canadians if they're racists as asserted by the mainstream narrative. pic.twitter.com/A30YFOGpRu

This was earlier today while I walked around the protest. Things are a bit quieter today but there are still people coming in. https://t.co/zP8kpkPepe

Ottawa residents Alycia @plantbasedb and @SounguiFitness who live in centertown curious about the protests went to check them out and found only love and kindness. Songui brought his mother to the protests. She had only seen the mainstream coverage and she changed her mind. pic.twitter.com/T9UB1DgJkN

More Ottawa residents who came out in support of the protest. These people are hurting and continue to be mocked and demonized by an important section of the power elite including the PM. Begs the question who is unCanadian after all? https://t.co/4uENmRYwlg

"Countless trucker convoy participants and supporters are Black. A popular Instagram account called "poc4freedomconvoy" with over 60,000 followers has documented the outpouring of support that the trucker convoy received from members of Black communities across Canada." 🙂 https://t.co/Aw4DjI4Kfr

Did you know that Muslim truckers have been organizing Friday prayers in Ottawa? Including yesterday.

Why don’t the mainstream media corporations report on the diversity of the trucker convoy?

Agree or disagree with the protest, but stop lying about who these Canadians are. pic.twitter.com/VuhGd6kjmH

FreedomConvoy USA “We have a right to resist and we have an obligation & duty to do so!” T. Lindsay