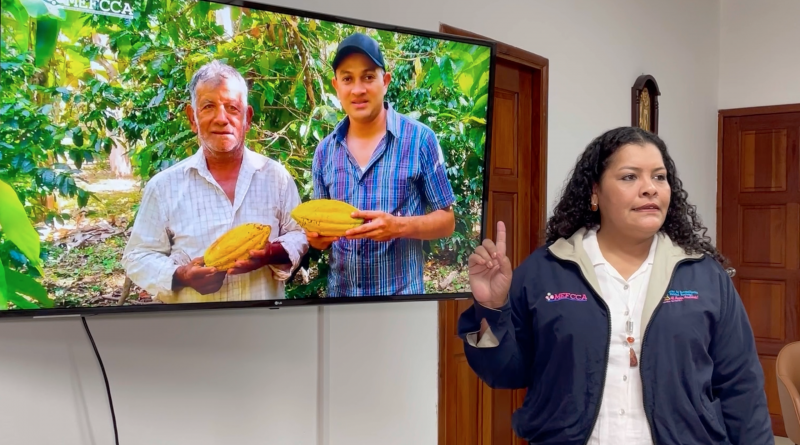 In Managua, Nicaragua, we interviewed Minister Justa Pérez of the Ministry of Family, Community, Cooperative and Associative Economy, known as MEFCCA.

Could you start us off with a summary of what MEFCCA does to stimulate, develop and promote the popular economy?

With pleasure, greetings. I would like to tell you that the Ministry of Family Economy arose as part of the strategy of the Sandinista government in the fight against poverty. When Comandante Daniel took office in 2007, he decided to launch a National Plan for Human Development in which a number of public policies and a number of programs and projects aimed at the fight against poverty are being implemented. There are programs and projects aimed at restoring the rights of Nicaraguan families, starting with basic rights such as health, education and above all, the Ministry of Family Economy is responsible for promoting production at this early stage aimed at food security.

Then the Hambre Cero program (Zero Hunger) was launched, which is a very successful strategy of the Sandinista government, where more than 200,000 women were provided with capital and goods for reproduction. We are talking about goods that in the countryside are used to produce foond. We are talking about cows, pigs, pork and poultry. So, in a short period of time it was possible to have food production so that families could contribute to this, to improve these conditions and added to this, we saw the restitution of rights, road infrastructure, electric energy and telecommunications.

In the 15 years that we have been Pueblo Presidente, we have been able to reduce poverty and extreme poverty, reduce the poverty figures of almost 50%. 1 in 2 Nicaraguans was in poverty and almost 20% in extreme poverty. Today we continue to fight against poverty but in smaller numbers. Today we can say that we have eliminated hunger here. No matter how humble a household may be, it has three meals a day.

This is because it is guaranteed by policies and socio-productive programs. Here families have produced a lot of basic grains, a lot of products for export. Now, 2021 was the year in which we recovered economically thanks to the efforts that families have been making hand in hand with the government. We now have emblematic programs such as Hambre Cero, emblematic programs such as Usura Cero, programs such as Patio Saludable, which has to do with promoting production in small spaces, in family places, through school, family and community gardens.

And now in this new stage, we are working to promote all kinds of entrepreneurship in the countryside and in the city. 26 productive strategies are being promoted by the Sandinista government, including genetic improvement of the main items of deportation.

Today we are promoting the beef sector in the top ten export products. We’re also exporting beans and producing significant amounts of food from Nicaragua that have come to serve for export to neighboring countries in Central America.

So the Ministry of Family Economy has a very important mission to promote family agriculture in all its forms in a sustainable manner, promoting environmentally friendly agriculture, agriculture that has to do with the diversification of family plots, the incorporation of practices that have to do with adaptation to climate change.

We also have important items such as coffee, which occupies a very important place in exports and in the life of the Nicaraguan family. A large number of producers are dedicated to coffee production. And they are not only producing it well, but they are transforming it and exporting it.

We are complying with the international norms of market requirements. We have a national production system, which is the one that also ensures that producers are complying with these standards and also as part of the work of the Ministry of Family Economy. We manage the organizational part. We give the legal status to the cooperatives. We are in charge of the cooperative organization. There are a large number of agricultural cooperatives, but also service cooperatives. So we are working to strengthen the model in order to produce more, to produce with higher quality and to look for national and international markets.

In our country, a very important strategy is the commercialization spaces throughout Nicaragua. There are fairgrounds, municipal fairgrounds, national fairgrounds, where the idea is that fair trade can take place, that the producer sells directly to the consumer and that both are winners.

We are also strengthening capacities and we are also providing capital with solidarity credit and with technological bonds that help the family to take a step forward in this task that it has assumed as part of its co-responsibility in the model of shared responsibility of the families. We have been promoting creativity and innovation. We are in the National Program of Creative Economy, which has come to enhance the cultural industries and how to combine art, culture with the talent of our people. It is a wonderful thing and how our people are aligned to that, to that invitation of the Sandinista Front that together we are going to move forward in a different model, where the center of development is the person.

So there is a lot of motivation from the family. We’ve recovered the economy from significant damage to our economy which was done in 2018, in a failed coup attempt sponsored by the enemies of humanity and who wanted to take power away from the people, from the Pueblo Presidente. But 2021 meant the rebound in the economy for Nicaraguan families. There was growth of more than 9%, giving us a starting point for 2022 where sooner rather than later we can say that we are going to declare Nicaragua poverty free.

What would you say was the state of things before the government introduced these approaches?

It is important to know the strength and fortitude of the Nicaraguan people. For 16 years a campaign of fear was introduced here to say the least, targeting families who voted for the Sandinista front. Then came the war, the military service and the economic blockade.

And so we spent 16 years suffering and impoverishing as a nation. Then Comandante Daniel returned to power and began with all the policies that we have described at this time, and this gave positive results in the family, economic growth, better living conditions, elimination of hunger and malnutrition. This gave confidence to the people.

Then, during the 2016 elections, there was also a very strong campaign around the NICA Act. That’s when the sanctions began. However, the people ratified the FSLN government because it had already generated the confidence that it is the only government which will guarantee those steps towards well-being, towards development. During the 2021 campaign, Nicaragua was also threatened with sanctions and the international media did their thing, smearing Nicaragua.

But the beautiful thing now is that the people, aware that this is all just a media campaign, decided to continue trusting the model of faith, of family, of community of the Sandinista Front. In this sense, the leadership of Comandante Daniel and of comrade Rosario play a very important role. Also the international relations that have been strengthening. Re-establishing relations with China provides us with a new challenge, because it is no longer a matter of making raw materials or grains available for exports, but to move towards more finished products, industrialized and in larger volumes. So we are happy. We knew about the challenge, but we are working and preparing those conditions to produce more, to produce better quality, meeting standards, but also to industrialize.

We have been working as a production system on a national industry policy that will require some investments, some of this momentum, but we are already on that work path. We are preparing ourselves to continue producing our nation’s food, to continue supplying food to our dear brothers in Central America, but also to position some of our Nicaraguan products in China, but also in Russia. We have learned through our Minister of Finance about Russia’s interest in knowing or being able to exchange. They are very interested in cigars. We have an award for the best cigars in the world, but we have quality coffee, we have an award for the best fine cocoa.

So Nicaragua has been working on that path of recognition, on that path of efficient performance and on that conscience, a collective conscience that makes us unique as Nicaraguans. The support of Commander Daniel for the productive sectors, for the economic sectors of the country, are the ones that have allowed us to have the results we have with the equal participation of men and women.

Can you tell us about how the democratization of the economy has promoted the inclusion of women?

We work on a gender policy that has to do not only with names of women in positions or women as numbers, but as women participating, women making revolution, women transforming their lives. A very important program is the solidarity credit, as assets are directed to women. The Comandante and the Sandinista Front know that to provide capital to a woman is to provide for that family.

Our program, in its majority 80% of the protagonists are women in the commercialization spaces, in the credit program, in the field, in all the spaces of value addition are women, many women are participating, many young people.

That is why we say that there is a positive energy that has been unleashed and that we are taking advantage of to promote all these processes of democracy in our country. Because as the President said in an interview, democracy is not about getting the vote, democracy is responding to the needs of the people.

So we are talking about an efficient public policy, where all the government actors work in an articulated and coordinated manner to provide this service to the families, to provide this timely support.

I was telling you that the same ministry was created in 2012 as part of the strategy to fight poverty and, together with it, the National System of Production, Consumption and Trade was created. So, in the system we are all the institutions that have to do with production and with the dynamization of the economy and also with technology, with health. Our Commander, with his wisdom, has been able to articulate these efforts in an efficient way, so that a producer has the support of all the institutions. For example, today we call the entrepreneurial route for enterprises. 26 productive strategies that contribute to the family’s becoming involved in a more sustained production, with greater volume, higher quality and willing to get better markets for their commercialization.

This is also a very important contribution made by other complementary institutions such as energy, health and education. Because if the family has solved the issue of their children’s education, the school lunch, their school supplies, if they have health programs, if they have a road, where their production will go, if they have electricity to transform, the family has more possibility to think about how to improve their productive performance, how to make a business efficient and how to generate more income, which in the end, our objective is to achieve that the family has better income for each activity they carry out, which contributes to satisfy their needs.

So, well, we have a very big task, very big, but very important in these times, preparing ourselves for a better future for the Nicaraguan family.