The debate over “Mass Formation Psychosis” depoliticizes what should be understood as a confrontation between competing social models.

In an expression of irony lost on no one, on January 3rd Google went out of its way to limit search results for the term “Mass Formation Psychosis” on its platform. The reason for this strange and sudden act of censorship? Users were searching for the term en-masse after a guest appearance of virologist and mRNA researcher Dr. Robert Malone on Joe Rogan’s immensely popular podcast. During the interview Dr. Malone invoked clinical psychologist Mattias Desmet’s approach to the classic Freudian theory of “mass formation” (Massenbildung, or Gruppenbildung) as an explanatory framework for the COVID-19 herd-mentality that has overtaken much of the West.

Google’s censorious behavior revealed more than just their subservience to Fauciism. It betrayed a growing disquiet among Americans with the contradictions in the unprecedented curbing of constitutional rights and liberties, the unabashed scapegoating of more than a third of the population of the West, sweeping digital censorship, and the rule of dubious government-appointed experts. The immediate popular interest in “Mass Formation Psychosis”  demonstrates an increasing desire to understand why others are so willing to sacrifice their freedoms and civil rights in the face of a “deadly threat” which, for most, simply never materialized.

On power and anxiety

If power is the ability to assert one’s interests against others and to subject them to one’s own will, then the twin promises of democracy and civil society have done much to challenge its legitimacy. Such a challenge necessitates new techniques of domination and control, and the era of neoliberal capitalism—designed as a predominantly anti-working class, anti-democratic enshrinement of global corporate capital accumulation—has worked overtime to perfect such techniques. The most productive of these is the generation of social anxiety on a massive scale. German psychologist Rainer Mausfeld, in his eminent book, Anxiety and Power, identifies three discreet pillars of systematic anxiety production under the conditions of neoliberal rule:

Mattias Desmet’s own original approach draws heavily from Mausfield’s theory of the neoliberal subject in a state of free-floating, or dislocated anxiety. For Desmet, Mass Formation can be defined by a lack of social bonds; the absence of meaning or sense in one’s life; free-floating anxiety over, and frustration and aggression towards no specific target.

Following this model, we can see how mass media’s production of panic and fear during the pandemic (such as with the now-debunked photos of caskets in Bergamo, Italy in March of 2020) provided our free-floating anxiety with a very concrete cause—the virus. Far from unsettling us, this substitution for something concrete functioned as a kind of meaning-providing technology for our previously absent sense of control. Furthermore, in participating in a united struggle against the virus, a new kind of social bond was created, relieving—at least for a time—our desperate sense of social atomization. Finally, our aggression towards an unspecific culprit was now replaced with a definable scapegoat—the unvaccinated, or “anti-vaxxers.” 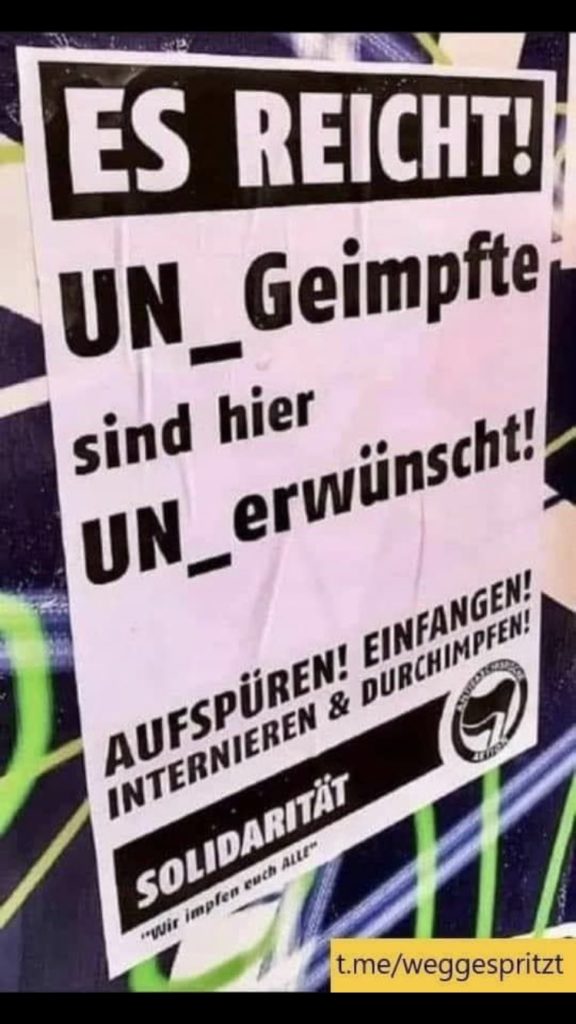 A German Antifa poster reads, “Enough! The unvaccinated are unwanted here! Track them down! Capture them! Detain and force-vaccinate them!”

If it is doing its job correctly, Mass Formation can create feelings of pleasure in an individual—displayed today as outright fantasies of murder and torture (take for instance Antifa’s calling for the detention and forced vaccination of citizens). Supporters of the narrative, in their role of shock troops for the state and capital, will have begun to dismiss talk of the protecting of civil liberties as “meaningless chatter” and consider the concept of freedom itself as nothing but a reactionary trope.

But here’s the rub—while the Mass Formation hypothesis correctly identifies the social role and political utility of anxiety, it completely deemphasizes power. As such, it depoliticizes the necessary confrontation between our new biopolitical-totalitarianism and the old, civil rights-based social order by obfuscating the relations of state power and the people.

With the beginning of the biopolitical era in March 2020, the neoliberal state has openly endorsed top-down mass manipulation. Early on, the German government launched a public relations campaign with the strategic aim of creating a “shock effect” in society by invoking a future “worst case scenario” of the pandemic. The paper, now publicly available only due to legal efforts, was disseminated to key advisors, public relation strategists, medical experts, and members of the media.

In order to achieve the desired shock effect, the concrete effects of an infection on human society must be made clear … Suffocation…is a primal fear for every human being…When [children] infect their parents and one of them dies in agony at home and they feel they are to blame because, for example, they forgot to wash their hands, it is the most terrible thing a child can ever experience.

This abominable declaration of war, purposefully targeting small children, makes it clear that the state is using tried-and-true tactics of anxiety propaganda to swear its subjects into an agenda of biopolitical surveillance capitalism.

The methodological framework of Mass Formation, while useful for identifying the mechanisms that lead to a kind of “mental gulag,” keeps the fundamental problem intact. It is undoubtedly good that people are becoming aware of the war that is being waged against them, the arrival of a new form of biopolitical-totalitarian entanglement of state and capital that sticks to nothing as it crushes the remnants of civil society. But it also means it is high time we identify and confront the enemy.

Elena Louisa Lange is a philosopher based in Switzerland. She is the author of Value Without Fetish: Uno Kōzō’s Theory of ‘Pure Capitalism’ in Light of Marx’s Critique of Political Economy, and co-editor of the forthcoming The Conformist Rebellion. Marxist Critiques of the Contemporary Left.