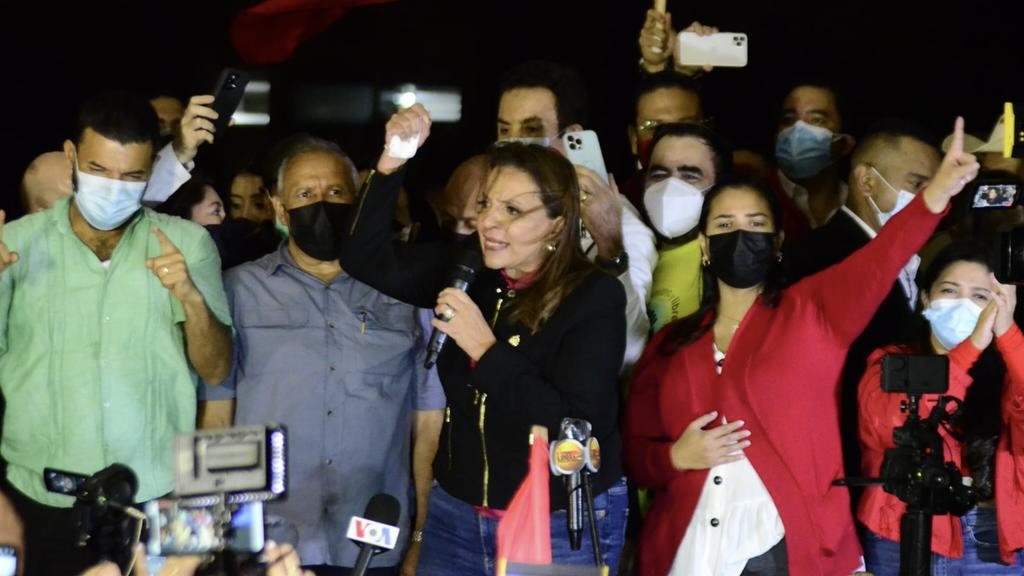 Xiomara Castro of the Liberty and Refoundation Party (Libre Party) will take office today as president of Honduras. She scored a historic victory in the general elections held on November 28, 2021, putting an end to 12 years of far-right rule in the country cemented through coups and fraud. However, over the past week, diverse maneuvers by conservative sectors, which resulted in the creation of a parallel congress, have put the very fragile Honduran democracy under pressure.

Betrayal in the Libre Party

On January 20, Xiomara Castro called a meeting of the Libre Party’s 50 elected representatives and their alternates to discuss the implementation of the Bicentenary Agreement made between the Libre Party and the Salvador Party for the elections. One key point of the agreement was regarding the election of the leadership of the legislature. Shortly after the meeting was set to begin, the Libre Party’s general coordinator, former president Manuel Zelaya, said on Twitter that 20 elected Libre deputies were absent from the meeting.

Among those absent was Jorge Cálix, one of the most voted deputies. Information circulated that the absence of the 20 deputies was due to their disagreement over the point of the Bicentenary Agreement which stated that a member of the Salvador Party would be elected as president of the Congress.

In a communique released later that night, the Libre Party called the absence of the deputies an “omen of counterrevolutionary betrayal to the party and the Honduran people that defeated the narco-dictatorship of the National Party.” They further highlighted that elected president Xiomara Castro will not tolerate the lack of respect of the vote of the Honduran people that elected the Alliance of the Libre Party and the Salvador Party, made official through the Bicentenary Agreement, nor the making of alliances with “representatives of organized crime, corruption, and drug trafficking.”

The statement also outlines that Xiomara Castro will not accept to be sworn in by a President of Congress that “came from betrayal” and will instead be sworn in on January 27 by a judge.

The same night, the defector deputies from Libre, in a meeting with deputies from the National Party, announced that they planned to elect Jorge Cálix and Yavhé Sabillón as president and vice-president of the Congress. In a poignant tweet immediately after the news broke, Xiomara wrote “the betrayal has come to fruition.”

The following day, Manuel Zelaya called for an extraordinary meeting of the party’s national coordination and elected deputies and announced the expulsion of 18 members of the party who “betrayed the blood of our martyrs and the project of refounding our homeland” (two of the original 20 retracted their position against Xiomara).

With the official session to vote on the leadership of the Congress set to take place on January 23, a day before, Xiomara called for supporters to join her to keep watch outside the National Congress building and called for an end to “the dealings of organized crime, corruption, and drug trafficking that represent [former president] JOH (Juan Orlando Hernández) within Libre to stop the transformation of Honduras.”

Thousands of people rallied in support of Xiomara and the Libre Party outside the Congress building on the night of January 22 and into January 23, preventing the conservative sections from taking over the buildings and interfering with the elections of congressional leadership.

On Sunday January 23, while thousands of people continued to rally in the center of Tegucigalpa chanting “Out JOH”, two sessions of the National Congress were held in Honduras to elect the leadership of the legislature. One session was held in the official halls of Congress surrounded by crowds of supporters, and the other was held in a country club, Los Bosques de Zambrano, just outside the city.

Since then, heavy tension has hung over Honduras, with the inauguration day set to be the climax of these developments as it will be the first time these deputies will come face to face after the division. The actions taken by the former Libre legislators, fueled and supported by the far-right sections, have already served their purpose of creating political instability, weakening Libre’s position in the Congress, and undermining the institutionality of the Honduran state even before Xiomara has taken office.

A central focus of Xiomara’s proposals is on withdrawing legislation passed by the National Party-dominated Congress which cemented the neoliberal, militarized project in the country and passing fresh legislation which guarantees access to basic rights such as healthcare, education, employment, and housing. These efforts depend on being able to forge unity within the Congress. If the obstacles for the Libre government to undertake the massive transformations needed to reform Honduras after 12 years of “narco-dictatorship” were already sizable, they are now even more complex.

However, hope continues to be found on the streets. Xiomara and the legitimate congressional leadership have received tremendous support from the Honduran people and people’s movements in the country. The historic mobilization on January 22 and 23 showed that the Honduran people support the path towards true transformation and reject the collaboration of former Libre party members with the National Party.

Social movements like the Civic Council of Popular and Indigenous Organizations of Honduras (COPINH) are traveling to the capital to attend the inauguration in the National Stadium and have reiterated their position of hope towards the incoming government.