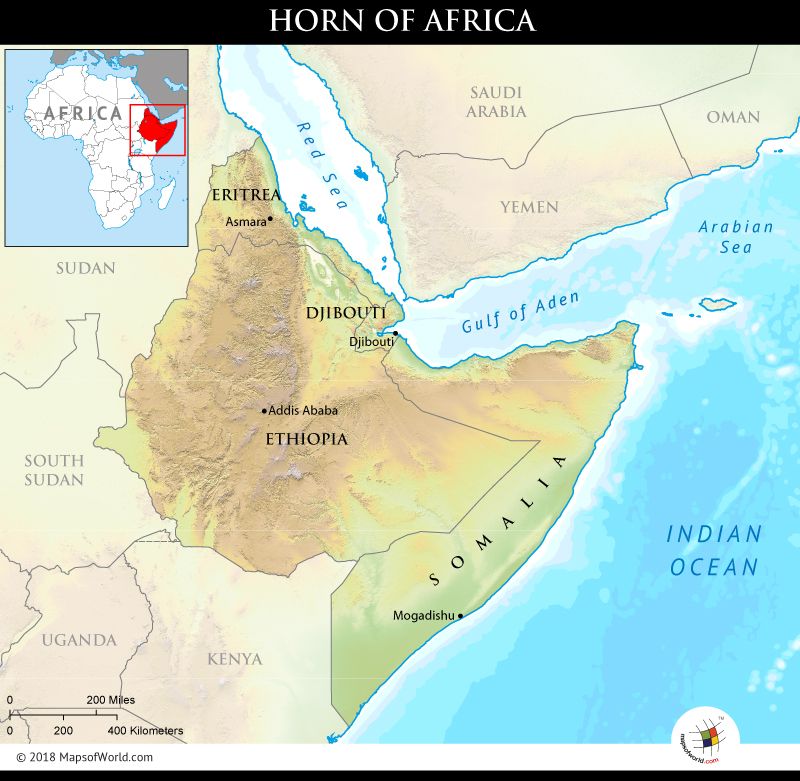 The current conflict in Ethiopia must be examined with a deep analysis of that country’s history. Neo-colonial and neo-liberal policies have played in large role in shaping conditions there.

Ethiopia after Nigeria is Africa’s second most populous country with a population of about 110 million. Ethiopia has many ethnic groups but there are eight that comprise more than 1% each of the total population. The major ethnic groups are Oromo 34.9%, Amhara (Amara) 27.9%, Tigray (Tigrinya) 7.3%, Sidama 4.1%, Welaita 3%, Gurage 2.8%, Somali (Somalie) 2.7%, Hadiya 2.2%, the rest amount to less than 1% (CIA Fact book 2021) The northern part of the country is home to the Amhara and Tigray groups which have historically been the most dominant. [1]

In 2018 Ethiopia was said to have Africa’s fastest growing  economy which sounds great however people do not tend to look at the Human Development Index (HDI). [2] It tells a more realistic story from a human rights perspective because it measures real living standards of poverty, education and infant mortality rates of the masses. Ethiopia in 2018 had an HDI raking of 173. [3] The larger the number the worse the people’s living standard. Just for comparison, the Ethiopian HDI number is larger than at least 10 other sub-Saharan countries; Nigeria, Ghana, Gambia, Senegal, Tanzania, Uganda, Zimbabwe, Cameroon, Zambia, and South Africa.

Thus, one might ask why this disparity?  Although the HDI have shown improvement for most African countries over the past several decades the numbers for Ethiopia demonstrate some curious contradictions that are rooted in neo-colonialism in general and the high level of kleptocracy for 30 years. Starting in 1991 the Ethiopian People’s Revolutionary Democratic Front (EPRDF) took power from the previous Derg government. The EPRDF was a an ethnic federalist (when states or regions are determined by ethnicity) political coalition of all ethnic groups although the leadership was dominated and ruled by the Tigray Peoples’ Liberation Front (TPLF).

The TPLF/EPRDF established a new constitution in 1994 which declared that Ethiopia was a federal republic and reportedly embraced a principle of self-determination and the right to secede. Although ideologically the leaders like Meles Zenawi , president until 1995 and then Prime Minister, used to be a Marxist-Leninist, but ended up following a form of state capitalism known as the ‘developmental state’ common among some east Asian countries. [4] Not only had the TPLF/EPRDF government ruled for 27 years up until 2018 they apparently loot ed the country as a means of enriching the TPLF/EPRDF’s elite class and at the same time prepared the Tigray region for possible future secession. [5] The TPLF/EPRDF established many state monopoly companies. Examples of big conglomerates are Ethiopian Electric Power Corporation (EEPCO), and the Endowment Fund for the Rehabilitation of Tigray (EFFORT).  According to an article in IPS news the World Bank reported that EFFORT accounts for half of the country’s economy. [6]  Ethiopia’s largest company however is the Metals and Engineering Company (METEC ) which is a large military industrial conglomerate that includes ninety-eight (98) companies that manufacture everything from TV’s to military equipment, vehicles, including armaments to turbines for the for the big dam project (which due to corruption it apparently never delivered). [7] All three; EEPCO, EFFORT and METEC were controlled by the TPLF dominated EPRDF and are accountable for the all the corruption that accompanied them.

Note that there is little evidence that this Tigrayan elite cared about the Tigrayan poor and working class either. A quotation by the Ethiopian academic Dr Yohannes Woldemariam is instructive he said [8],…

“What is often overlooked in most analyses of Ethiopian politics is that the majority of ordinary Tigrayans who are blamed by ethnic association with the TPLF kleptocrats live in no better conditions than average Ethiopians. Indeed, many Ethiopians still see Tigreans as beneficiaries of TPLF rule. It is only a minority of well-connected individuals (these include non-Tigrayans), – who benefited greatly from the inflow of money from collaboration with the TPLF.” [9]

Like in most of Africa there is intimate interconnection between ethnic and class contradictions which colonialism has historically not hesitated to exploit in various ways towards their strategy of divide and rule. The analytical lens of CLR James (who coincidentally was also one of the members of International African Friends of Ethiopia (IAFE) founded in 1935 in response to the Italian invasion) comes to mind. [10] James wrote in The Black Jacobins: Toussaint L’Ouverture and the San Domingo Revolution,

“The race question is subsidiary to the class question in politics, and to think of imperialism in terms of race is disastrous. But to neglect the racial factor as merely incidental [is] an error only less grave than to make it fundamental.” [11]

In Ethiopia as well as in the USA and other countries the racial or the ethnic factor is definitely not incidental but it must always be properly fused with the class analyses. It is interesting to note that Ethiopia while it has a relatively high % of Illicit Financial Flows (IFFs) it also has  the highest per capita rate of ‘brain drain’ (rate of emigration of skilled workers and intellectuals) among African countries. It is not uncommon to hear for example that there are more Ethiopian doctors in Chicago than in Addis. [12]

Research shows that the ruling TPLF/ EPRDF elite comprador class in addition to developing the Tigray region at the expense of the rest of the country, during a sample span from 2004 to 2013 stole $26 billion. [13] These were deposited in foreign banks outside of Africa. Although IFFs are definitely not an uncommon problem in neocolonial Africa, however the ruling TPLF/ EPRDF seems to have outdone many other comprador elites in other countries in their greed and lust for looting at the expense of the Ethiopian people regardless of ethnicity.  Research shows that starting in 2005 Ethiopia’s IFF’s gradually increased to as high as 11% of the country’s GDP and by 2010 exceeding the average of all sub-Saharan countries at 5% of their GDP.  When neocolonial crooks loot their countries they don’t put the money in the African Development Bank for example, rather they make sure it goes to banks outside of the continent further impoverishing the continent. It also brings to mind one of Africa’s infamous neocolonial kleptocrats, Mobutu Sese Seko who was said to have amassed an estimated personal fortune of $4 billion over 32 years of Zaire’s (DRC’s) money in foreign bank accounts when he was deposed. [14] Capital flight from Zaire at the time amounted to $12 billion. In 1991 it was said that Mobutu had established a neocolonial kleptocracy to end all kleptocracies and set a new standard by which all future international thieves will have to be measured. To be precise we should say neocolonial kleptocrats because we can never forget that the biggest pillagers  of world humanity are the imperialist and colonialist. Although at first glance it does appear that the TPLF/ EPRDF late leader Meles Zenawi did not quite surpass the Mobutu scale of theft since apparently his net fortune was only three billion but when one accounts for the fact that he was in a leadership position ten years less than Mobutu it may be about equal.  [15] We also must be reminded that thievery on this scale is not possible in the global south unless it is sanctioned and enabled by imperialism. Both Mobutu and Zenawi TPLF/EPRDF  operated with the consent and enabled by US imperialism and international finance capital. We will leave to African economist who will have the task of further comparing the capital flight (IFFs) under stewardship of Ethiopian governments TPLF/EPRDF and the current government up to 2020 to see if the IFFs are comparable or exceed the kleptocracy that was supposed to end all kleptocracies in Africa.

Meles Zenawi, as reported in the article by Farid Abdulhamid, publicly [16] condemned neoliberalism as a failed project when he hosted the 2012 World Economic Forum on Africa.  His form of state capitalism known as the ‘developmental state’ became policy in 2006. Under this policy major businesses and public services were controlled by the state albeit with a combination of public and private sector investment as the best path of development. The alleged benefit of this model is that it put some limits on privatization and allows for the possibility of more internal national ownership and control of resources and the means of production. Of course the success of this assumes there is no kleptocratic elite. US imperialism usually takes offense when any country of the global South that does not want to open its markets to private corporate multinationals. In this case the US apparently was willing to ignore rejection of neoliberal policy in exchange for Ethiopia’s EPDRF government agreeing to serve as US proxy enforcer in the so called “war on terror” by invading its African neighbor Somalia in 2006 to overthrow the moderate Islamic Courts government. [17]

As a result of  TPLF/EPRDF imposed poverty and ethno-chauvinism, Oromo and Amhara and other groups felt excluded and started mass demonstrations. Abiy Ahmed was the third chairman of the EPRDF and elected prime minister of Ethiopia on April 2, 2018 (and the first of the Oromo ethnic group). A few important highlights in the last short 3 years Abiy has been in office were; first, release of thousands of political prisoners , secondly a Joint Peace declaration with Eritrea signed after only three months in office for which he received a Nobel Peace prize.  Third was the founding of  The prosperity party  which included representation of all of Ethiopia’s ethnic groups who were formerly in the EPDRF although the TPLF (though not representing all Tigrayans) disagreed with its formation and refused to join. [18] This disagreement ultimately led to the current conflict. The fourth  highlight is the political pivot towards neoliberal politics by Abiy Ahmed which included  liberalizing the economy, opening its state-run telecoms and state-owned Ethiopian Airlines to private foreign investment while also seeking backing of the US and Apartheid Israel alike. [19]  This shift also meant a shift away from China which had been Ethiopia’s largest trading partner and investor. It didn’t take the IMF/WB long to jump at the opportunity as they disbursed $2.9 billion in 2020.  [20] Ethiopia has remained a constant partner of AFRICOM and a key ‘partner’ in the so called war on terror throughout both of the last governments. [21]

While the US continues to be selectively concerned about ‘human rights’ and thus recently sanctioned the Ethiopian government by disqualifying  Ethiopia from the African Growth and Opportunity Act AGOA , because of alleged human rights abuses. US hypocrisy continues to be demonstrated by its continuing support for the criminal war in Yemen.[22]  [23]

Although there are definitely some problems and contradictions in the Abiy government, his positive efforts at unifying the population across ethnic lines by way of the Prosperity Party in general and the peace declaration with Eritrea in particular should be celebrated. The primary contradiction at this time is the US backed TPLF aggression that threatens to tear the country apart which could result in its balkanization and must be opposed by all anti-imperialist and Pan Africanists.

As Revolutionary Pan-African internationalist and anti-imperialist we condemn all oppression and exploitation be it based on class, ethnicity/race,  gender or sexual orientation.   We agree with Farid Abdulhamid of the Group for Research and Initiative for the Liberation of Africa when he says …

“The only system that can work for Ethiopia and Africa at large is the establishment of a revolutionary, Pan-African, socialist state that can not only forge national unity and Pan-African identity, but end centuries-old imperialist driven, conflict-prone, socio-economic inequalities.” [24]