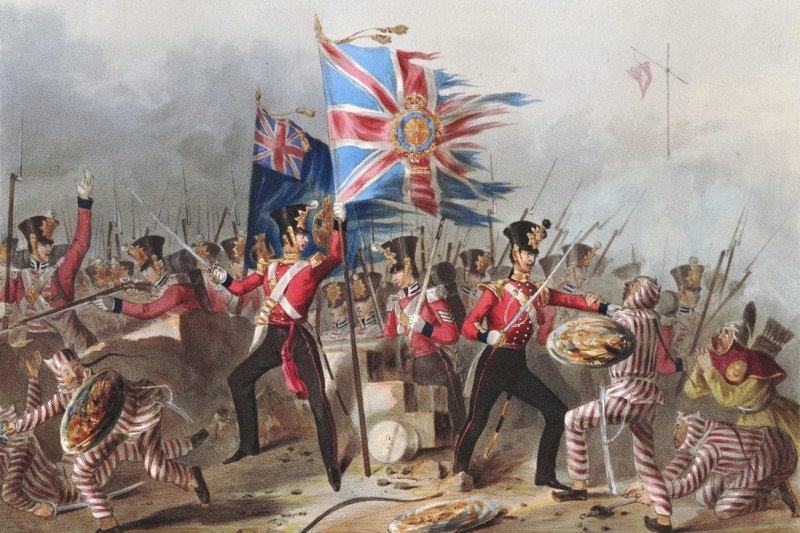 A depiction of the Battle of Amoy, fought between British and Chinese forces during the First Opium War. Painting by Michael Angelo Hayes/Anne S. K. Brown Military Collection/Wikimedia Commons.

Amid the wreckage of wars in Iraq and Afghanistan, the United States and its allies have turned their sights on China. University of Victoria professor emeritus and historian John Price examines the rise of the coalition of Anglo settler colonial states of Canada, the United Kingdom, the US, Australia, and New Zealand, and how they are today fomenting conflict in the Asia Pacific. You can read the series in its entirety here.

“In Iraq, the United States, Britain and Australia fight together in a ‘coalition of the willing’ that recapitulates the Anglo-Saxon solidarity of earlier times with devastating consequences.”
—Marilyn Lake and Henry Reynolds, Drawing the Global Colour Line

The Five Eyes spy network, representing the United States, the United Kingdom, Australia, Canada, and New Zealand, was established in 1948.[1] Conventional histories portray its formation as the natural culmination of years of wartime collaboration in the fight against fascism. What that story conceals, however, is the common lineage of these countries as settler colonial states formed through the dispossession of Indigenous peoples.

Ancient empires, including the Greek and Roman variants, often adopted forms of settler colonialism, but European expansion from Columbus onward shaped its modern guise.[2] From the 1800s, the British empire and its settler offspring would come to the fore in the scramble for global power. Espousing liberalism and free trade while practicing white supremacy, this Anglo alliance was grounded in histories of dispossession of Indigenous peoples, global slavery, white domination, and racial capitalism that met resistance at every turn from the forces of decolonization and worker uprisings.

The US was the first of the modern settler states to throw off the mantle of British control, only to expand across the continent in its own imperial quest. The American and the British empires would soon come to collaborate as they sought to gain commercial and strategic advantage in the modern, competitive world of global capitalism. Their pursuit of direct and indirect forms of colonialism, while concurrently consolidating settler colonialism in the Pacific Northwest, is perfectly illustrated in three treaties, all signed between 1842 and 1846.

Treaty of Nanjing: The first treaty was signed by authorities representing the British empire and representatives of the Qing Dynasty of China in the aftermath of the Opium Wars that saw the British defeat the Qing forces trying to stop the illegal importation of opium to China. Britain backed corporations such as Jardine, Matheson & Co. which used opium (cultivated by the British in India at the time) to pay for the tea that was an increasingly valuable commodity in Britain. Qing officials objected to the opium trade and took action to prevent its import, only to be confronted with the armed might of the British empire. Though the Chartist working class movement in England opposed such a war, British Foreign Secretary, Lord Palmerston, decided for war after consulting extensively with William Jardine (of Jardine, Matheson & Co.) in London at the time, regarding the preparations for war and proposed terms of settlement.[3] In the ensuing battle, Qing forces lost and were forced to sign what today we refer to as an unequal treaty with the British. The 1842 Treaty of Nanjing provided the British with major commercial concessions that would give white merchants access to Chinese ports other than Canton, allow the British to set the terms of trade, and give British citizens the rights to “extraterritoriality,” or immunity from prosecution under Qing laws. Opium imports would increase. This was colonialism in its classic form where an external other imposes unequal relations on another country, mainly to give corporations commercial privileges, masked in the language of ‘free trade.’

Treaty of Wangxia: Following the precedent set by the British, the fledgling American empire imposed its own treaty on the Qing Dynasty in 1844. American merchants had arrived in China not long after the British. They too were involved in the opium trade, writing to the British foreign secretary in support of British preparations for the Opium Wars.[4] The Treaty of Wangxia provided American traders with privileges like those accorded to the British by the Treaty of Nanjing. The Americans then proceeded to Japan, becoming the first to impose an unequal treaty on that country, telling Japanese authorities that if they did not sign a treaty with the US, the British would impose an unequal treaty that would allow them to import opium as they were doing in China.[5] An American legal scholar has probed the implications of the Treaty of Wangxia, noting: “Although Americans in China were exempt from the operation of Chinese law starting in 1844, Chinese in America were absolutely subject to American law. Moreover, American law absolutely discriminated against them—sometimes with considerable effort and ingenuity. For example, the California Supreme Court held in 1854 that the prohibition of ‘Indians’ witnessing against white persons applied to Chinese witnesses as well—on the dubious ground that Columbus thought he was in Asia when he called the natives of North America ‘Indians.’”[6]

Treaty of Oregon: On this side of the ocean, in the Pacific Northwest, another treaty was in the offing two years after the signing of Wangxia. At this time, there were still only a few hundred non-Indigenous people north of the Columbia River, almost all employed by the Hudson’s Bay Company, compared to an Indigenous population of a hundred thousand or more who saw themselves as sovereign peoples wedded to the lands with their own forms of governance.[7] However, the British and American governments deliberately ignored them, treating the “Oregon” territories as terra nullius: empty lands. Basing their claim solely on the now discredited Doctrine of Discovery, they signed the Treaty of Oregon in 1846, asserting British and American sovereignty over the land’s 1.4 million square kilometers (equal to the combined territories of France, Germany, Italy, and the UK) and cutting the Pacific Northwest and its Indigenous communities in half as they extended the border along the forty-ninth parallel from the Rockies to the Pacific. This led to the creation of the British settler colony of “British Columbia” that joined Canada in 1871 as a province, and to the creation of the US states of Washington and Oregon to the south. On both sides of the border, the new colonies brought in white settlers to consolidate Anglo-American control. This required dispossessing Indigenous nations of their lands, providing land grants to white settlers, and grants or licenses to resource corporations for extractive industries. This was settler colonialism in action, where the external other actually annexes Indigenous sovereign territories, and subsequently tries to eliminate the Indigenous population in order to possess the land. Indigenous resistance to this process continues to this day.

These three treaties illustrate two distinct forms of imperial expansion—colonialism and settler colonialism—the former based on a range of measures from treaties to outright political control, as in the case of British control of India; the latter based on annexation, the seizure of Indigenous lands, and their redistribution to settlers and capitalists from the imperial centres.[8] The US and British empires were founded on both colonialism and settler colonialism.

The triumph of the United States in the Spanish-American War (1898) accelerated its expansion—illegally annexing Hawai’i, colonizing Guam, Puerto Rico, and the Philippines. Not surprisingly, many in Britain encouraged US expansion, as illustrated by Rudyard Kipling’s 1898 poem, “The White Man’s Burden”:

Take up the White Man’s burden—
Send forth the best ye breed—
Go bind your sons to exile
To serve your captives’ need;
To wait in heavy harness
On fluttered folk and wild—
Your new-caught, sullen peoples,
Half devil and half child.

In the twentieth century, the British and American empires collaborated to reinforce white supremacy at home and abroad, well described by historians Marilyn Lake and Henry Reynolds in Drawing the Global Colour Line. Culture and capitalism cemented relations as they worked at curtailing Asian immigration to the US and British dominions; developing joint interventions in China; containing Japan’s expansion; thwarting the proposed racial equality clause and divvying up the islands of the south Pacific at Versailles in 1919; and the establishment of the Washington treaties relegating Japan to the status of a junior partner in Asia. All contributed to the formation of the Anglo-America alliance in Asia to which Canada actively contributed.[9] To be sure, frictions also existed as resistance to colonialism developed. But the alliance grew and evolved, particularly as US economic capacity expanded with the adoption of Fordist production processes of mass production and consumption.

The Second World War saw the British government increasingly dependent on US support. By the end of the war, the US displaced the UK as the most powerful force in the Anglo alliance. But it also faced the forces of decolonization at home, in Asia, Africa, and Latin America, not to mention the challenge presented by the Soviet Union, particularly in Europe.

With Great Britain in decline, Winston Churchill called for a united front of the Anglo alliance in his “Iron Curtain” speech in Fulton, Missouri in 1946. With US President Harry Truman on the stage, Churchill declared that Soviet tyranny (an iron curtain) was descending over eastern Europe. What he conveniently omitted was that independence movements in India and elsewhere were laying siege to British colonialism and the Soviet Union refused to accept the liberal-capitalist paradigm of growth. To counter these challenges, Churchill proposed:

Now, while still pursing the method of realizing our overall strategic concept, I come to the crux of what I have traveled here to say. Neither the sure prevention of war, nor the continuous rise of world organization will be gained without what I have called the fraternal association of the English-speaking peoples. This means a special relationship between the British Commonwealth and empire and the United States… If the population of the English-speaking Commonwealth be added to that of the United States, with all that such co-operation implies in the air, on the sea, all over the globe, and in science and industry, and in moral force, there will be no quivering, precarious balance of power to offer its temptation to ambition or adventure. On the contrary there will be an overwhelming assurance of security.[10]

This was a colonial call for unity, for the English-speaking Anglo-American empires to band together in an alliance that would have the power to counter the effects of global decolonization as well as the perceived Soviet menace. The UK and its settler colonial offspring—the US, Canada, Australia, and New Zealand—were to use their economic and cultural power, derived from Indigenous dispossession, global slavery, white supremacy, and racial capital, to establish Pax Americana with the ability to leverage support from non-Anglo allies including European nations and Japan.

This was the alliance that spawned the Five Eyes spy network in 1948. It would play a decisive role in the post-war politics of race and empire in the Pacific as well as globally.

Part 5: Why the Anglosphere is united in an anti-China front

John Price is professor emeritus at the University of Victoria, author of Orienting Canada, and a member of the Advisory Board of the newly formed Canada-China Focus, a project of the Canadian Foreign Policy Institute and the Centre for Global Studies (University of Victoria).

[1] For a homily to the Five Eyes, see Anthony R. Wells, Between Five Eyes: 50 Years of Intelligence Sharing (Oxford: Casemate, 2020).

[3] The talks between Palmerston and Jardine are covered in some detail in Richard J. Grace, Opium and Empire: The Lives and Careers of William Jardine and James Matheson (McGill-Queens University Press, 2014), 249-289. See also Carl A. Trocki, Opium, Empire and the Global Political Economy: A Study of the Asian Opium Trade, 1750-1950 (London: Routledge, 1999), particularly Chapter 5.