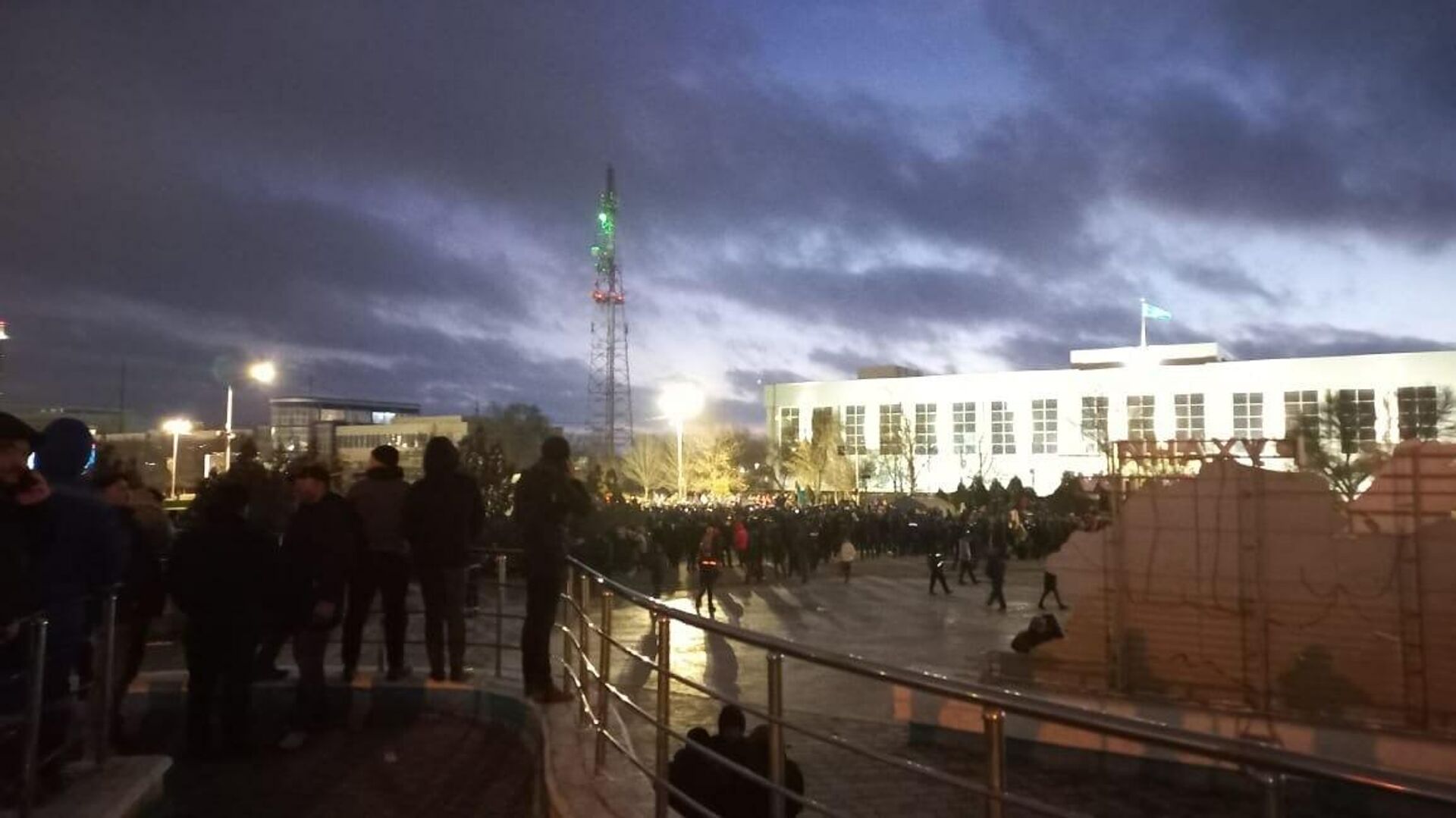 From Kant airport took off the 25th Special Forces Brigade of the Kyrgyz Army of the CSTO peacekeeping contingent in Kazakhstan; equipped with Dajiang CS/VN3 armored vehicles, it was transported by Russian Il-76 military transport aircraft. 150 soldiers of the 25th Special Forces Skorpion Brigade of the Kyrgyz Armed Forces were being deployed to Kazakhstan; “According to the CSTO agreements, there is a section: Collective Rapid Deployment Forces. We have prepared the troops of the Collective Rapid Deployment Forces, now 150 servicemen at the Kant airport are waiting to board a military transport aircraft of the Russian Aerospace Forces,” Kyrgyz Defense Minister Baktybek Bekbolotov stated. “The planes are fully bridged, they arrived yesterday. Personnel will leave from one side, equipment will also be loaded: 8 armored personnel carriers, 11 cars. Not all the ‘Skorpion’, but a part, 150 personnel. There will not be a single soldier, only officers, no recruits,” he had added. Also 100 soldiers were sent from Armenia to Kazakhstan colle peacekeeping forces of CSTO.

The Belarusian peacekeepers sent to Kazakhstan, in accordance with the decision of the CSTO Collective Security Council, included a company of the 103rd Airborne Brigade of Vitebsk Special Forces. The peacekeepers had taken off from Machulishi airport in a military transport aircraft Il-76MD of the Russian Federation. “At the moment, we are advancing to the place where the missions will be carried out,” noted the head of the Belarusian Defense Department. RB-341V Leer-3 electronic warfare and electronic intelligence complexes, specializing in GSM cellular networks, were being sent to Kazakhstan. One feature of the complex is electronic warfare using unmanned Orlan-10 aircraft. When the drones fly in formation, one acts as a transmitter and the other suppresses communications, making it possible to solve electronic warfare tasks at a range of up to 215 kilometers from the unit on the ground. The Shanghai Cooperation Organization’s counterterrorism facility said it was ready to provide assistance to Kazakhstan if requested. Colonel-General Andrei Serdjukov, commander of the Airborne Forces, is in charge of leading the actions of the 19,000-strong CSTO Peacekeeping Forces in Kazakhstan. The Peacekeeping Forces of the Russian Federation include units of the 45th Airborne Special Forces Brigade, the 98th Airborne Division and the 31st Airborne Brigade.

Situation in Kazakhstan on the morning of January 8.

Gunfire resounded in Alma-Ata, Toldykorgan and Ust-Kamenogorsk. In Taraz (Dzhambul during the Soviet era) there was a clash in which 6 terrorists were eliminated and 7 police officers wounded. According to current information, during the attack by radicals on the Toldykorgan preventive detention center, three terrorists were eliminated. One law enforcement officer was killed and two wounded. Protests continued in Zhanaozen, with the participation of 1000 people. In Aktau, protesters were still on the square in front of the administration. More than 4200 people were detained in Kazakhstan on suspicion of rioting. The First Deputy Head of the Presidential Administration of Kazakhstan Dauren Abaev stated that the special units of the Committee for National Security and the Ministry of Internal Affairs of Kazakhstan “Arystan”, “Berkut” and “Arlan” participated in the operation to clean up Almaty from armed looters. 18 were the losses among Kazakh security officers, and 748 were wounded among internal affairs employees and National Guard soldiers, while 2298 people were arrested. The Kazakh military in Alma-Ata had asked the insurgents to leave Republic Square, warning that they would open fire. The 35th DShB was fighting near the Kapchajgaj reservoir, 70 km from Alma-Ata. The jihadists had taken control of the bridge. This region of Kazakhstan borders China, where Uyghurs live. Terrorists would seek a connection between this region of China and the areas occupied by Salafists in Kazakhstan, which would be joined by terrorists from Central Asia.

Private Madiyar Kaisarov seriously wounded on January 5 in Kyzylorda. The department states that despite the deadly danger of the situation, the guard remained faithful to his oath and fulfilled his constitutional duty to defend the Fatherland to the end. He died of his wounds.
Guard Ajbat Amanov, along with comrades in Taldykorgan, fought thugs and marauders. He, too, died on January 5. Madiyar was born in 2002, Ajbat in 2003. “Only the batiri can protect the people and the state from the invasions of foreign and internal enemies. The names of Madiyar Kaisarov and Ajbat Amanov will forever be included in the heroic chronicle of the National Guard,” the department stressed.

Pictured is the cadet killed at the Alma-Ata military school. M. E. Bitim, who fought terrorists at the Academy of the Border Service of the National Security Committee of Kazakhstan, KNB (FSB), repelling an armed group using spades, on 5/01/2022. The terrorists beheaded the cadet. Uyghurs and Arabs were identified among the terrorists. Kazakhstan’s border service is tasked with guarding the border to ensure that people and legal entities respect the regime. The defense concerns territorial, water and biological resources of the exclusive economic zone. According to the Ministry of Emergency Situations of Kazakhstan, during the unrest, 10 employees of the department were injured, 29 fire and rescue units were damaged, 5 tankers completely destroyed.

Finally, the insulting U.S. Secretary of State Anthony Blinken stated that he did not understand why the Kazakh authorities had turned to the CSTO for help in dealing with the unrest. Blinken had said Kazakhstan could handle the protests without help from other countries. “The Kazakh authorities have everything to deal with the protests on their own. Therefore, it is not clear why they needed foreign help.” Atlanticist Michelle Bachelet, the United Nations High Commissioner, demanded that Kazakh authorities release all detained pogromists, saying they were enforcing citizens’ right “to peaceful protest and freedom of expression.”