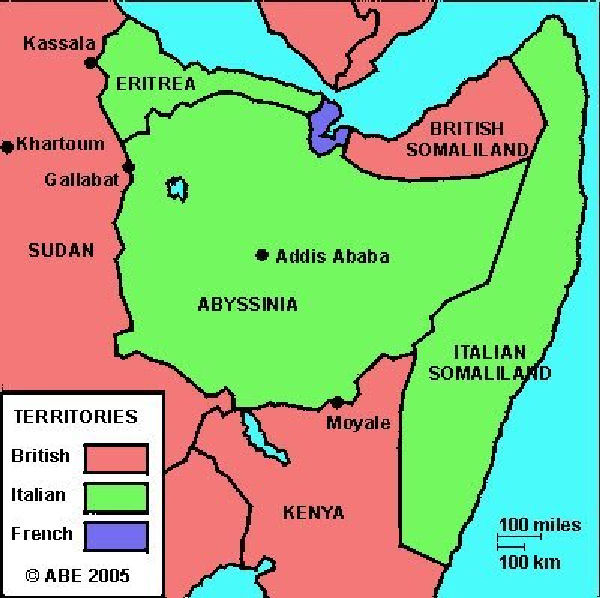 Map of European Presence in the Horn of Africa

The mythology of Ethiopian independence is an impediment to understanding the current situation. Ethiopia did not escape European intervention, and that history impacts the present day.

As the world prayed for peace during the Christmas season, the Tigray People’s Liberation Front proposed a ceasefire to the Ethiopian government, raising hopes for a pause in a violent war that has left thousands dead and millions displaced.

Many welcomed the development because of worries that imperialists want to use the fighting as an excuse to, yet again intervene militarily on a continent that is already saturated with U.S. Africa Command (AFRICOM) operations, French troops and assorted mercenary personnel deployed for destructive, exploitative purposes.

While Ethiopia’s troubles are alarming, and ethnic conflicts and internecine violence are no strangers to Africa, for many in the African diaspora, whenever these tensions emerge in Ethiopia it is particularly disturbing. That’s because for generations there has been a romantic pride in Ethiopia. The sentiment is rooted in an observation made by Pan-Africanist Edward Wilmot Blyden, who in 1882 commented: “…there is no people, except the Hebrews and other ancient inhabitants of Palestine, more frequently mentioned in the Scriptures of the Old and New Testaments than the Ethiopians…”

The Ethiopian presence in the Bible was not a matter of passing interest. During the late 19th Century, the doctrine of the independent Black church movement in South Africa became known as “Ethiopianism” because of the Biblical prophecy: “Ethiopia shall stretch forth her hands unto God.” To those enamored with the idea of an ancient divinely blessed Black polity, it mattered not at all that when the Bible mentioned Ethiopia, it was not referring to the country that now bears that name and that came into existence many, many centuries after the scriptural texts were authored.

The African World’s fascination with the region was further enhanced when Abyssinian Emperor Menelik II succeeded in fending off an Italian invasion of the city of Adwa in 1896. With that event, the imagination of the African World was forever captured. Historian Ibrahim Sundiata noted: “The spell of an ancient but vague place was on the Diaspora.”

Sundiata went on to say that when Italy, under Mussolini’s leadership, posed a military threat to Haile Selassie several decades later, “[t]he Fascist menace to Ethiopia after the opening of 1934 provoked an upsurge of Pan-Africanist activity across the black world…Established organizations, like Britain’s League of Colored Peoples and the United States’ NAACP, took up the cause.”

There are even anecdotes about the humblest of Black laborers doing their part to beat back Mussolini by not only contributing pennies and nickels to Ethiopian solidarity campaigns, but in some cases expressing a willingness to actually go to Africa to take up arms. So powerful was the grip of the idea of an ancient, mystical African kingdom on the imagination of the 1930s diaspora that when a circle of individuals in Jamaica proclaimed that Haile Selassie (formerly known as Ras Tafari Makonnen) was Almighty God, it resonated with many who became adherents to the faith that came to be known as Rastafari.

The current tensions in the Horn of Africa are of exceptional importance, and to address them successfully, Africans throughout the world must understand the region without the clutter of romantic legends and mythology. Foremost among the matters to be clarified is the widely held belief that notwithstanding the 19th Century Scramble for Africa by European states, and the subsequent colonization of the African continent, Ethiopia somehow managed to maintain its independence. This idea has inspired awe among generations of Africans who, while drowning in the diaspora’s sea of white supremacy, have desperately sought inspiration in the idea of an unconquerable African kingdom. The truth however about Ethiopia’s experience with colonizers is not only misunderstood, but also a key to understanding the reasons for the region’s current tensions and warfare.

Historian John Henrik Clarke observed that when European colonizers learned of territories where there were abundant natural resources or other strategic benefits, the idea of sharing with the indigenous population never occurred to them. Clarke noted that colonizers always said: “We’ll take it all.” This was no less true of Africa.

The suggestion that during the Scramble for Africa, Europe cast its gaze on most of the continent with greedy lust but ignored the Horn of Africa is illogical, and certainly in conflict with the Clarke doctrine. In fact, Europe was exceptionally interested in the Abyssinian region, which was not yet fully consolidated into the state now known as “Ethiopia.” What existed within and without Abyssinia were numerous ethnic communities that included, among others: Amhara, Tigray, Oromo, Sidama, Gojjam, Shoa, Wollo, Afar, Ogaden, and Manz.

The primary reason for Europe’s interest in the territory was the opening of the Suez Canal in 1869. In their book “The Invention of Ethiopia,” historians Bonnie Holcomb and Sisai Ibssa explain: “From this time on, British and French behavior in the Horn of Africa have to be seen in a global economic perspective. The economic conditions in Europe and the cost of transport led the French to dig the Suez Canal and the British to try to gain financial control of it.” The specific interest in Abyssinia emerged in response to Britain’s purchase of majority shares in the canal and France’s effort to frustrate Britain’s control by dominating the source of the Nile River.

The British/French competition for the Horn of Africa led to one of the continent’s earliest imperialist proxy contests. Britain tried to dominate the region by backing and acting through Yohannes IV, the emperor of Tigray. France competed by arming and supporting Menelik, the emperor of Shoa. Italy also attempted to get in on the action by supporting Menelik, but their efforts were frustrated by France, which wanted exclusive influence.

When Yohannes died, and Menelik was able to take control of the entire region, Britain was left out in the cold. To get back in the game, Britain goaded Italy into challenging French influence in the region. This culminated in the Italian attack on the city of Adwa. Although that battle sent the hearts of the African World soaring because of the perception that Menelik stood alone, tall and proud in fending off Italian invaders, it was in fact a battle between France and Britain that used not only African but Italian proxies.

There was no lapse in European interest in the Horn of Africa, and there was continuing competition between Britain, France, and Italy for control. By 1906, the three countries hammered out a “Tripartite Treaty” that provided: “We the Great Powers of Europe, France, Great Britain and Italy, shall cooperate in maintaining the political and territorial status quo in Ethiopia…” In fact, these countries not only failed to preserve conditions in the region that had existed for many generations, they created and exacerbated tensions.

The area we now know as “Ethiopia” is the consolidation of not only historical kingdoms in Abyssinia, but also neighboring nations and communities that include Oromia (of the Oromo people), Sidama, Afar, and others. By the late 1880s while Europe was overtly colonizing most of Africa, Europe was quietly providing arms to Menelik that he used to conquer neighboring nations for the ultimate benefit of his European sponsors. These were hostile takeovers. Holcomb and Ibssa report:

“Several observers mention the Oromos’ pleas for assistance in providing arms so that they could fight back and one British observer who accompanied Menelik noted that if the Arsi Oromo had been armed with rifles, Menelik would probably not have been able to defeat them.”

The historians go on to explain: “Oromia and other nations of the south were occupied by the forces of Abyssinia aided by technical and strategic help from the European capitalist class interested in seeing this part of Africa play a role in their master plans for the development of the continent.”

The process might be described as Africans’ little league colonialism financed, guided and controlled by major league European colonizers. “It is a dependent colonial system,” Holcomb and Ibssa said. “Within it a distinctive capitalist socioeconomic formation combined with an Abyssinian feudal socioeconomic formation to form a hybrid.”

The arrangement worked to Europe’s advantage for several decades, but by the late 1930s, instability in Europe that ultimately led to World War II distracted Britain and France. Ignoring the Tripartite Treaty of 1906, Italy seized the opportunity to assert exclusive control over Ethiopia. “Italy calculated that Ethiopia’s old friend France was too weak to come to Ethiopia’s aid now because of the German threat,” Holcomb and Ibssa said. “She assumed also that Britain would ultimately be weakened and would have no interest in taking up the cause of Haile Selassie against the Italians. In this, the Italians miscalculated.”

Britain indeed came to Selassie’s defense and Italy was beaten back in 1941. In the years that followed, Selassie not only perpetuated Ethiopia’s mini empire, but also expanded it by, among other things annexing Eritrea. Ethiopia also became the focus of external influence and control by not only Britain, but also the U.S. and the Soviet Union. The intricacies of these relationships are less important than the fact that notwithstanding the absence of the trappings of colonialism worn by other countries in Africa, Ethiopia has been dominated by European colonizers in substance if not in form, which goes a long way toward explaining the chronic tensions that now exist within the country.

One of the great crimes of colonialism is that external forces, without regard for local ethnicities, cultures and organic national groupings, forced consolidation of sometimes antagonistic communities for the advantage of the colonizers. Affected communities and nations with a natural yearning for independence and self-determination have resisted, often by fighting the Africans they can see rather than the foreign forces that control events while lurking behind the scenes.

Ethiopia stands as an inorganic conglomeration of national groupings that fight for their respective interests. It is yet another glorious mess that imperialists created and that must be set right by Africans themselves. As Africans engage in this process, the last thing the region needs is military intervention, or intervention of any kind by foreigners. The U.S., France, and other foreign forces must steer clear.

For its part, the African diaspora must shed its longstanding romantic self-delusion about Ethiopia and remain mindful of imperialists’ history of fickle, Machiavellian manipulation of warring forces in the Horn of Africa. These western capitalist strategies and schemes have caused confusion for many who are not direct participants in the conflicts. Nevertheless, Africans in the diaspora can be certain about one thing. That is that we must oppose with all available resources the meddling of imperialist states and their militaries in the Horn of Africa so that the masses of the people in that region will have the opportunity to resolve for themselves conflicts and tensions that were caused by imperialist meddling.

Mark P. Fancher is an attorney and the author of the newly published novel: The Negroes of Friends Village . Fancher is a member of the Black Alliance for Peace Africa Team, the All-African People’s Revolutionary Party, and the National Conference of Black Lawyers. The views expressed are his own and do not necessarily reflect the views of organizations with which he is affiliated. He can be contacted at mfancher[at]comcast.net.