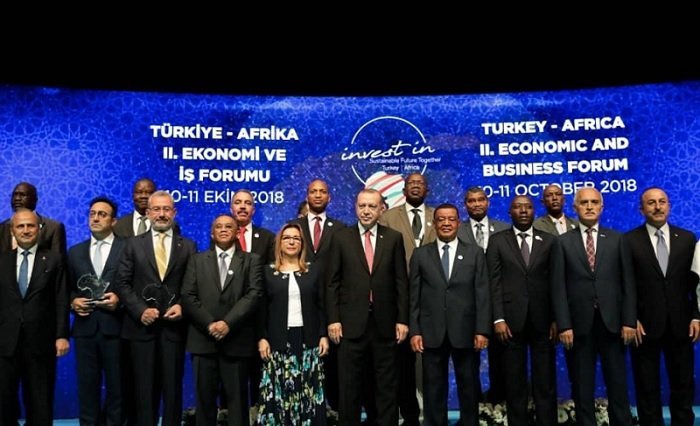 This month, over a dozen African nations participated in the two-day Turkey-Africa Partnership Summit in Istanbul, hosted by Turkish President Recep Tayyip Erdogan. Its theme was “Enhanced Partnership for Common Development and Prosperity”. About 16 Heads of State were present, among them Presidents of Ghana, Zimbabwe, and Senegal. The current African Union’s Chair, Félix Tshisekedi, also attended it, as well as 102 ministers (including 26 Foreign Ministers) from 39 different countries. A memorandum of cooperation was signed between the African Continental Free Trade Area (AfCFTA) and Turkey. The presence of so many high-level authorities was a diplomatic accomplishment for President Erdogan.

During the event, Erdogan stated that “This summit is a testament to the fact that Turkey is interested in Africa and Turkey’s interest in Africa is not a temporary interest, it is a maintained commitment. Our African brothers and sisters are showing they are interested in better cooperation with Turkey.” He also highlighted the fact that 1.3 billion people live in the continent and yet it is not represented at the UN Security Council, a situation which he described as a “huge, flagrant injustice”.

The Turkish President also announced his country would deliver 2.5 million doses of Covid-19 vaccines to Africa in the following days. The Summit produced guidelines for Turkish cooperation with several African countries (the “Turkey-Africa Partnership Joint Action Plan 2021-2026”), with a number of projects that also include the private sector, covering a number of areas such as education, infrastructure projects, security, agriculture, and so on.

Turkey’s main trading partners in Africa are Nigeria, and South Africa, followed by Ethiopia. Turkish presence in Libya is well known, but it also has investments in Senegal, a military base in Somalia and it currently seeks to enhance its ties with Nigeria even further as well as with other countries. Between 2002 and this year, Turkish embassies in the continent went from 12 to 43, while between 2003 and 2020, the volume of African-Turkish bilateral trade went from $5.4bn to $25.3bn. Turkish companies have spread across the whole of Africa, with a focus on construction, textiles, and electronic devices. Turkey provides arms and military equipment, including unmanned aerial vehicles (UAVs) for several African nations and its military personnel currently trains Somali soldiers.

Far from being a mere economic engagement, the Turkish authorities have in fact been developing a consistent foreign policy regarding the African continent, involving aid, businesses, cultural and military ties, as well as good diplomacy.

However not all is well; Turkish presence, particularly in its military aspect, also fuels some tensions and contradictions in Africa, as the Turkish Republic is involved in a number of proxy wars. The continent is already quite divided over the Israeli-Palestinian conflict, especially after the Abraham Accords, which opened the door for many Arab states to normalize their relations with the Jewish state as some of them today see Turkey as their main concern. Ankara has been a harsh critic of these normalization deals and the Arab-Israeli cooperation that ensued, often involving a military dimension.

Turkey plays an aggressive role in the Algerian-Moroccan dispute over the Western Sahara region – a very polarizing issue, which in itself is already a serious threat to economic stability in North Africa and even Europe. Turkey is also involved (against Egypt) in the Ethiopian-Egyptian disputes over Ethiopia’s plans for a dam on the Blue Nile. This is another pressure cooker of tensions – aggravated by the recent coup in Sudan. Ankara has provided military drones for Ethiopia and has been accused of offering its expertise for the controversial dam project.

Moreover, Turkish military presence in Libya particularly has been a concern for the Egyptian authorities in Cairo, who have supported Haftar’s  Tobruk-based Libyan National Army (LNA) in the Libyan civil war, while Turkey supports the Tripoli-based Libyan Government of National Accord (GNA) with troops. In January, Egypt reached out to the latter, in an attempt to counter Turkish influnce. Ankara remains GNA’s main backer, followed by Qatar, while LNA is supported by the United Arab Emirates (UAE), Russia, and France.

This complex scenario involves a kind of a proxy war between Turkey and Saudi Arabia plus the UAE, as is the case with Western Sahara. Since at least March, Cairo and Ankara have been trying to ease their tensions – much to no avail so far, in spite of some developments. Egypt considers the Muslim Brotherhood a terrorist organization, while Turkey remains a regional hub for this group, which it often employs as a tool for both hard and soft power – as it does elsewhere (in Europe) with the Grey Wolves, which are also considered a terrorist organization by many states.

More recently, Turkey, with Qatar’s support, has been seeking rapprochement with the UAE, as well as with other traditional adversaries. However behind such good will gestures, Ankara has not rethought its  neo-Ottomanist, and Pan-Turkist “Greater Turan” agenda.

While Turkish diplomacy is very sophisticated, often managing to overcome certain regional competitions to maintain good bilateral relations with a number of nations (despite such disputes), and while many states may certainly benefit from enhancing their ties with Ankara, Turkey’s military presence abroad, fueled in large part by a irredentist neo-Ottomanist ideology, has been contributing to increasing tensions and instability in the Mediterranean, the Caucasus region, Eastern Europe, and the Middle East. And this is so in Africa, too, and Ankara plans to gradually increase such a presence there.

The recent Turkish-African summit has made it clear that Turkey wishes to share its counterterrorism expertise and to enhance military cooperation in the African continent, although how exactly it will do so is still not clear. Be as it may, this could ignite further points of contention.

Uriel Araujo: Researcher with a focus on international and ethnic conflicts.