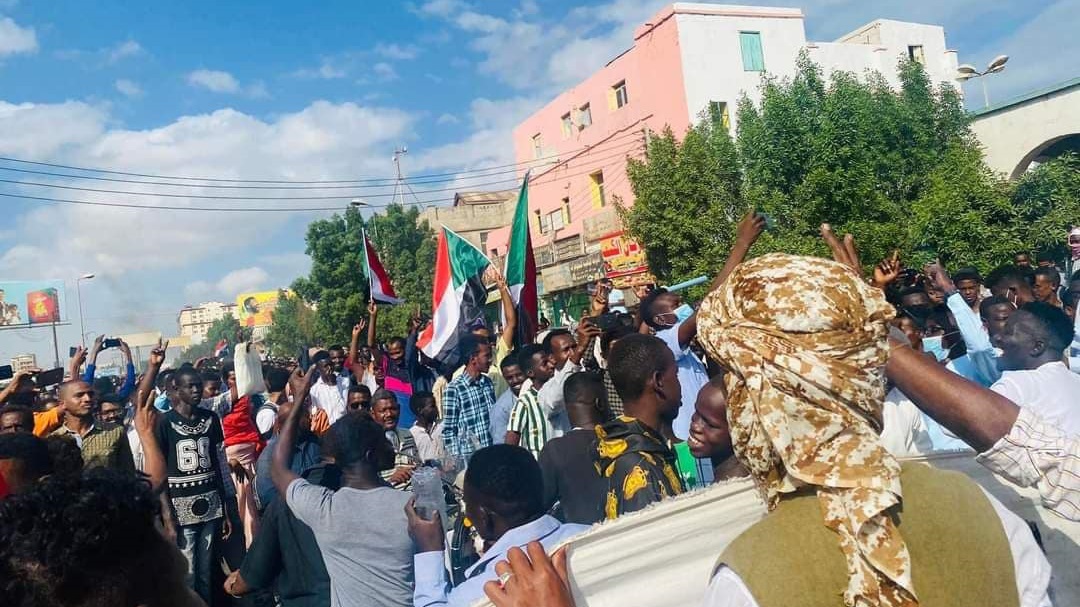 At least 235 demonstrators were injured in a crackdown by Sudanese security forces on December 25 when people took to the streets in large numbers. The day marked two months since the military consolidated its power through a coup

At least 235 demonstrators were injured in a crackdown by Sudanese security forces on Saturday, December 25. Tens of thousands of pro-democracy protesters took to the streets in cities across Sudan once again to resist the military’s consolidation of power by a coup two months ago. Despite the crackdown, protesters are defiant, and another ‘March of Millions’ is scheduled on Thursday.

Many of the injured were reportedly prevented from receiving treatment and detained from hospitals. Attacks on hospitals and medical personnel treating injured protesters were also reported.

“Apart from live bullets, they also use tear gas like bullets, firing canisters directly at the protesters,” Osama Saeed, a protester who is a member of the Sudanese Communist Party (SCP), told Peoples Dispatch.

The Central Committee of Sudan Doctors (CCSD) reported 20 injuries due to protesters being directly hit by the canisters. One of the injured is reportedly in an unstable condition. The doctors’ committee added that another 32 have suffered head injuries after being hit with batons.

In its statement on Sunday, December 26, CCSD added that 173 of the injuries occurred outside the Presidential Palace in the capital city Khartoum, where the offices of the members of the military junta are located.

The presidential palace was the destination where all the marches originating from different places in the three cities of Khartoum state – Khartoum, Khartoum North and Omdurman – were to congregate, Saeed said.

But the day before, the security forces closed all the bridges over the Nile connecting the three cities. Inside the three cities, “on all the main roads through which the rallies were to go through, they stationed the army, police and militias,” he said.

“There was fighting on all the main roads. Protesters clashed with the security forces preventing them from reaching the Presidential Palace,” Saeed added. The Khartoum State Security Affairs Coordination Committee maintains that 58 policemen were also injured.

When the protesters in Khartoum city overcame the cordons and reached the Presidential Palace, security forces opened live fire, shot tear gas and stun grenades, and attacked them with batons.

In Omdurman, protesters were attacked on the 40 Street beside the El Fithaab bridge which was blocked by the forces. The Mak Nimir Bridge which connects Khartoum North to Khartoum was blocked with containers – a move condemned by civil society as “a dangerous precedent that occurred for the first time in Sudan.”

The closure of bridges hampered the movement of medics and ambulances, even as hundreds of injured were in need, Joint Doctors Office (JDO) said in its statement. Security forces, its statement added, barged into Khartoum Teaching Hospital, and attacked medical staff who were treating the injured. Tear gas and stun grenades were also allegedly fired into the campus.

“A total of 114 suspects have been arrested and legal measures have been taken against them,” the State’s security committee said in a statement. The arrested protesters include the injured, who were prevented from receiving medical treatment and detained from hospitals.

The Sudanese Professionals Association (SPA) – a trade union coalition which along with the neighborhood Resistance Committees is leading the resistance to the coup on the streets – had called on lawyers to rush to the detention centers to secure the release of the detained. Concerns about torture of detainees are widespread in civil society.

During the previous ‘March of Millions’ on December 19, security forces killed at least two protesters, and wounded 300. “We have received deeply disturbing reports of sexual violence and harassment by security forces during [December 19] demonstrations,” the UN High Commissioner for Human Rights had said.

“Joint Human Rights Office in Sudan has received allegations that 13 women and girls were victims of rape or gang rape. We have also received allegations of sexual harassment by security forces against women who were trying to flee the area around the Presidential Palace on Sunday evening,” the UN body said.

Nevertheless, “the Sudanese people’s resistance to the coup.. continues steadily and vigorously, and it will not be stopped by oppressive actions” the SPA said in a statement on Tuesday, December 28, reiterating the call for another “March of Millions”, on December 30.