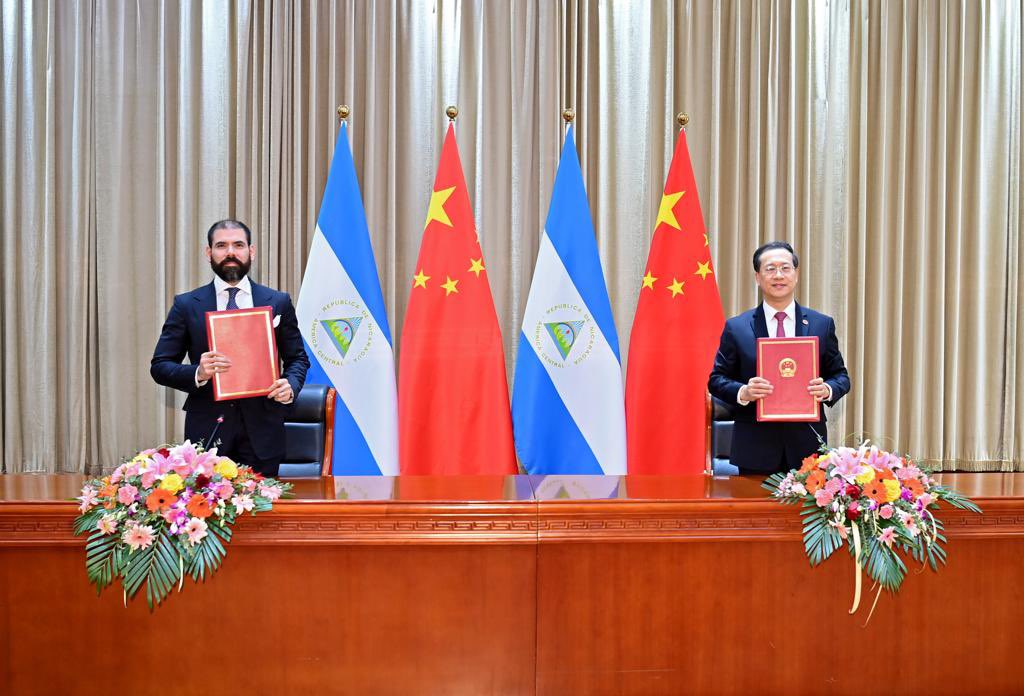 It is no coincidence that Taiwan has never gone out of its way to show support for Managua internationally and never has its political activity sought to intercede on Nicaragua’s behalf with its own leading patron – the United States – to whom they have always insisted that the relationship with Nicaragua was strictly commercial. The Free Trade Zone is the only portion of Nicaraguan territory that was of interest to the Taiwanese, who are now recognized by only 13 countries, besides the Vatican, out of the 197 that make up the entire international community.

The United States reacted by condemning Nicaragua’s decision which, according to them, would be contrary to Nicaraguan interests (which they presume to protect with illegal unilateral coercive measures) but evidently did not ask the opinion of their local flunkies, who would have explained to them how the very same private Nicaraguan business sector had long been asking the Sandinista government to re-establish relations with Beijing. Some observers have noted the peculiarity that the US is concerned about the end of relations with Taiwan in Nicaragua?s case when they were not as regards all the other Latin American countries.

But this peculiarity is due to an obvious consideration: while with other Latin countries relations with China are a commercial affair,  in the case of Nicaragua, Washington is well aware of the political affinity supporting and strengthening potential areas of collaboration,  an element preparatory to joint political initiatives on the international scene.

With the end of relations with Managua, Taiwan also loses the last strip of political-commercial association with Central America, since now Nicaragua, Panama, El Salvador and Costa Rica, together with the Dominican Republic, all recognize China and Honduras also foresees, in the electoral program of president-elect Xiomara Castro, the opening of relations with Beijing and the end of those with Taipei.

Nicaragua’s decision obeys matters of both principle and practicality. On the level of principle there is a full recognition of China’s historical-territorial reality that includes Taiwan as a full Chinese territory and not as an independent country as well as the full, total exercise of Chinese sovereignty over both Taiwan and the China Sea. Nicaragua’s strict adherence to International Law regarding the respect for territorial rights over land, water and sky has also been the axis of the country’s legal moves against Colombia and Honduras. So it is obvious that even when dealing with other countries, Nicaragua’s respect for the full national territorial integrity cannot be subordinated to transitory political contexts resulting from third party interventions unilaterally affecting the territories in question.

Thus, the reopening of relations between Managua and Beijing and their reciprocal political recognition was inevitable and, on the Chinese side, had been underlined in recent months with their defense of Nicaragua at the UN and with the immediate recognition of the election result of November. These are significant, unilateral gestures of great political value made even in the absence of formal diplomatic relations and, for that reason, have even more merit. The new course of action reinstates Chinese-Nicaraguan relations as they were in the first stage of the Sandinista Revolution; after which they weren interrupted by the government of Violeta Chamorro, who broke off relations with Beijing at the behest of the United States so as to open up for business with Taipei.

Consequences for the USA and the OAS

Obviously, along with political considerations with regard to international law, the decision also includes strictly political and, consequently, commercial evaluations. The political aspect prevails in the sense that the very heavy pressure of the United States and the OAS (two practically interchangeable acronyms) on Nicaragua, which is well represented by the phobic obsession of OAS Secretary General Almagro, who recites the script written in Washington regularly seasoned with threats of application of the body’s Democratic Charter which Managua has denounced. Some commentators think this could even lead to Managua’s suspension from the Central American Free Trade Agreement which would entail difficulties for continuing political, diplomatic and commercial exchanges between Nicaragua and part of Latin America.

More legally solid interpretations see the eventuality of the application of the Democratic Charter as much more complicated, because Almagro, who has made it a personal obsession given his career in the service of Washington, risks a great deal politically. The countries that abstained in the last vote, in fact, are countries of great political weight and, if, as is very likely, they confirm their opposition to unilateral measures, that would signify a split in two of the OAS that would start Almagro’s slide on his way out.

Moreover, prudence suggests another consideration: obtaining 24 votes in a motion of intent is one thing, but obtaining the same number to support a very harsh measure creating a readily copied precedent for many of those participating in the vote, seems much more difficult. In that case, should the necessary quorum not be reached, Almagro’s position leading the OAS would become an unsustainable joke.

In any case, the application of what can foreseen in terms of coercive measures would be very difficult, if only because shutting down their complex commercial relations with Managua would oblige the countries concerned to search for different and certainly less convenient markets. In short, as usual, the cost of the US criminal fury will end up being paid by its submissive allies.

Ending relations with Taiwan and reopening those with China, in this context takes on added value, because covers both tactical and strategic considerations. Tactically, it limits enormously the impact of any trade sanctions that may eventually be decided either by the OAS or by the USA with its recent Renacer Act, or by the European Union. Strategically, China, delivers political coverage of the highest level with an international weight rivaling that of the West, which, together with its political-military understanding with Russia, until now Nicaragua’s most important global ally, adds very significant interest to its decision to invest in Nicaragua.

First of all, China, in order to continue to sustain the rate of development at the levels projected for its economy, needs food and energy resources which Nicaragua, in its own small way, can certainly deliver to suit to Chinese needs. Secondly, any reopening of plans for the interoceanic canal would project Nicaragua as the leader of the Central American region and, too, that of China as a world power with a privileged role in the communication route between the Pacific and Atlantic Oceans. From a strategic point of view, this is of extraordinary importance for both countries.

The decision to link with China enhances Nicaragua’s position from every possible point of view and the timing seems perfect, confirming the tactical ability of Nicaragua’s president, Commander Daniel Ortega. On the eve of his new government’s inauguration, the United States and the OAS prepared to undermine his authority and autonomy using new sanctions and threats. They mistakenly thought the Sandinista government could be shaken by the throat and made to surrender, but their threats were rendered harmless.

Opening up the Chinese market and Chinese banks to Nicaragua vaporizes US and allied threats and secures Sandino’s nation from financial and commercial reprisals. The Renacer Act with which the U.S. thought to make Managua surrender via a signature on some regional diplomatic protocol is effectively a dead letter. What the US thought would be a show of power has turned into a spectacle of impotence.