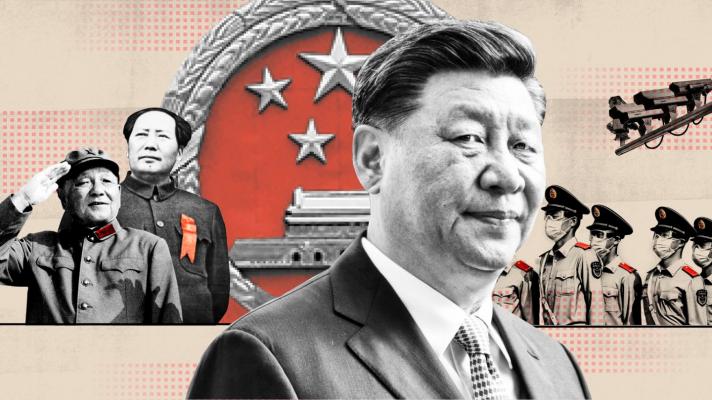 No one will be able to say that China is trying to impose its model on the world, attack another country, organize coups, assassinate presidents, exert armed pressure or install military bases in other countries (Photo: Financial Times).

The Sixth Plenary Session of the 19th Central Committee of the Communist Party of China (CPC), which recently culminated in Beijing, made official a new policy that is underway in the Asian country. Perhaps the most important thing has been that – even if interested or skeptical observers do not want to see it – the debate has been closed around the question: Where is China going?

If this were not the case, it would be valid to ask why there is so much nervousness in Western capitals about what they have belatedly realized in relation to the fact that China’s economic, technological, scientific, social and defense advances are aimed at solidifying and making the socialist system indestructible and its construction irreversible. The same objective of the United States when it set out to destroy the Soviet Union cannot be replicated in China.

It was also belatedly discovered that China’s use of successful methods of capitalist administration and the attraction of financial and technological resources from the West had tactical content as it struggled to emerge from underdevelopment and poverty to create a better standard of living for its citizens, an indispensable basis for advancing towards the construction of socialism. This is what is taking root now and the VI Plenum is a turning point in this sense.

If there is one thing that the Covid19 pandemic has made clear, it is to show the priorities and capabilities of each health system to face the virus. China has placed the full potential of the State at the service of its citizens, placing the lives of the people at the center of its concerns, while in the West the economic interest, profit and profit of the big capitalists prevailed. In the face of this, governments knelt down unrestrainedly.

On the other hand, the VI Plenary Meeting brought to the table the entry into a new stage after noting that the period initiated in 1978, which established the policy of “reform and openness” as its axis, has begun to come to an end, making it necessary to make adjustments to the system. This has arisen from the verification that the current situation, characterized by the increase in conflict with the United States and the global economic crisis that has had a new impetus with the pandemic, has forced new challenges and new commitments that must be assumed.

However, it is worth noting that the process of internal transformation in China has been underway for some time now. In May last year, the “dual circulation strategy” was launched, which gives greater prominence to the domestic economy in its interaction with global markets without abandoning them. China has also set out to move from an economy of “growth at any cost” to one of “high quality growth” by establishing higher levels of environmental control.

These decisions are integrated with the implementation of a “welfare state” aimed at reducing the income gap, increasing the delivery and quality of services for the population and raising consumption capacity so that by 2049 the entire population will have average income levels. To achieve this, the country intends to develop its own technology that will allow it to limit its dependence on the outside world to the minimum necessary.

In terms of the political structure of the State, the proposal aims at a more equitable distribution of income, avoiding the existence of monopolies and “the disorderly expansion of capital”, as pointed out in the November 13 editorial of the Chinese newspaper Global Times.

The publication explained that China intends to build a model of socialist democracy in which economic growth, social achievements for the entire population, the elimination of poverty and social justice should converge, that is, a system oriented to solve the needs of the majority, not of an exclusive minority of the population as in the West. With this, the aim is to enforce Article 2 of the National Constitution which states that: “All power in the People’s Republic of China belongs to the people”.

Democracy in China is not only representative, but also participatory and consultative, for which institutional mechanisms have been established and are also firmly established in the Constitution. But there is nothing so dear to the Chinese as the maintenance of unity and stability. Around these two categories revolves the entire work of state institutions, the government and the CCP. This idea establishes a clear difference with the West, where democracy is no more than representative, which is a mere “smokescreen”, since those elected have no accountability to the electorate. In China, accountability is constitutional. Failure to do so carries heavy penalties.

These transformations, which have accelerated since the arrival of Xi Jinping as General Secretary of the CCP in 2012, are also evident in the field of foreign policy. The traditional passivity and complacency of Chinese diplomacy in Deng Xiaoping’s time, which was characterized by the phrase “hide your strength and bide your time” and was oriented almost exclusively toward attracting investment and trade, is becoming a thing of the past.

From this perspective, it could be said that we are living a complicated stage of transition from that “low profile” diplomacy to a more protagonist one in which diplomats have greater autonomy in the field in which they have to act. Of course, they are transmitters of a history and a culture and of principled values that per se entail a different way of seeing the world and therefore contradict the “universal” norms that Eurocentric Western diplomacy has imposed on the world.

It would also seem that the recent events in Hong Kong, the signals regarding Xinjiang and the blatant interference in China’s affairs regarding Taiwan, have sent a strong signal to the Beijing leadership that the West and especially the United States will resist China’s advance with all the instruments at their disposal, whether legal or not. This has led diplomacy to align itself with the new challenges posed in defense of the vital interests of the Chinese nation, in keeping with a tradition oriented towards the search for balance and harmony, and which establishes that international cooperation must be carried out under the win-win principle.

Gradually, a new style of diplomacy is taking hold, one that places broader social and state objectives on the table. In this way, Chinese embassies are ceasing to be mere commercial offices and are taking on the attributes befitting a country that is a permanent member of the UN Security Council and the second largest economic power on the planet.

To this extent, in the recent past, China has assumed a fierce defense of its interests without skimping on the methods or forms it has used to do so. Witnesses of this novel way of behaving have been Canada, Lithuania, Australia, Sweden, the Czech Republic and Brazil, among others. But it has also adopted a much more active and responsible role in dealing with issues of global interest such as the fight against pandemics, the defense of the environment and the search for peace on the planet, acting from an autonomous position of its own design.

In the West they have felt the impact of the change and have even coined a term to refer to the new-generation Chinese diplomats whom they have dubbed “wolf warriors”, a name taken from a series of Chinese war action movies that were released in 2015 and whose second film became the highest-grossing in Chinese history.

The representatives of the new Chinese diplomacy do not skimp on the use of irony, satire and even mockery through social networks and other publications in order to defend their country’s interests without limiting or restricting themselves in the use of language. The United States had occasion to experience first-hand such a practice when the insecure Secretary of State Anthony Blinken was a direct target of the “poisoned” Chinese darts launched in Anchorage, Alaska in March of this year by State Councilor Yang Jiechi and Foreign Minister Wang Yi. Blinken and his delegation, who had wanted to bully the Chinese delegates during their intervention at the meeting, were so stunned and astonished that they were forced to ask for a momentary suspension of the “dialogue” to recover from the barrage that came from the veteran Chinese diplomats, to which the Americans were totally incapable of responding.

However, no one will be able to say that China is trying to impose its model on the world, attack another country, organize coups d’état, assassinate presidents, exert armed pressure or install military bases in other countries to interfere in their internal affairs.

Without aspiring to hegemony, which is constitutionally rejected in the very preamble of the Magna Carta, it would even seem that in this area, transformations are beginning to manifest themselves, at least from the rhetorical point of view. After the coup d’état in Guinea on September 5, led by a group of military officers, Beijing condemned the event in an unusual communiqué and demanded the release of President Alpha Condé.

This action would have been impossible in the recent past. During the diplomatic periods under the leadership of Mao Zedong and Deng Xiaoping, China adhered with absolute apathy to the principle of non-interference in the internal affairs of other countries, remaining impassive in the face of abhorrent human rights violations and failing to condemn monstrous interruptions to democracy.

The change in discourse should be understood as the foregrounding of China’s interests in the international arena. In this sense, the confrontational rhetoric adopted by Chinese diplomats is related to the need to begin to show cultural and civilizational traits that are intended to make it clear that “China exists” and that it will begin to play a relevant role in global issues, both in the multilateral arena and in its ties with other countries.

It is now up to China to be able to show that it differs from the usual aggressive behavior of the powers that throughout history have exhibited an imperialist and colonialist disposition. If China wants to behave differently, it will have to demonstrate it in deeds. Substantial internal changes aimed at building a more just, equitable and supportive society must be matched on the international scene.

There is no doubt that this is what China has tried to do in recent years, but it is still insufficient. In the case of Latin America and the Caribbean, China’s lack of knowledge of the general and specific reality of each country and its isolationist policy, which has led it to maintain almost exclusive relations with governments, parliaments and businessmen, has led to a distancing from society, which continues to perceive it as a foreign entity that seeks to replace the United States. Its work should be aimed at changing this perception, if it is interested not only in having good relations with governments and businessmen, but also with the people.