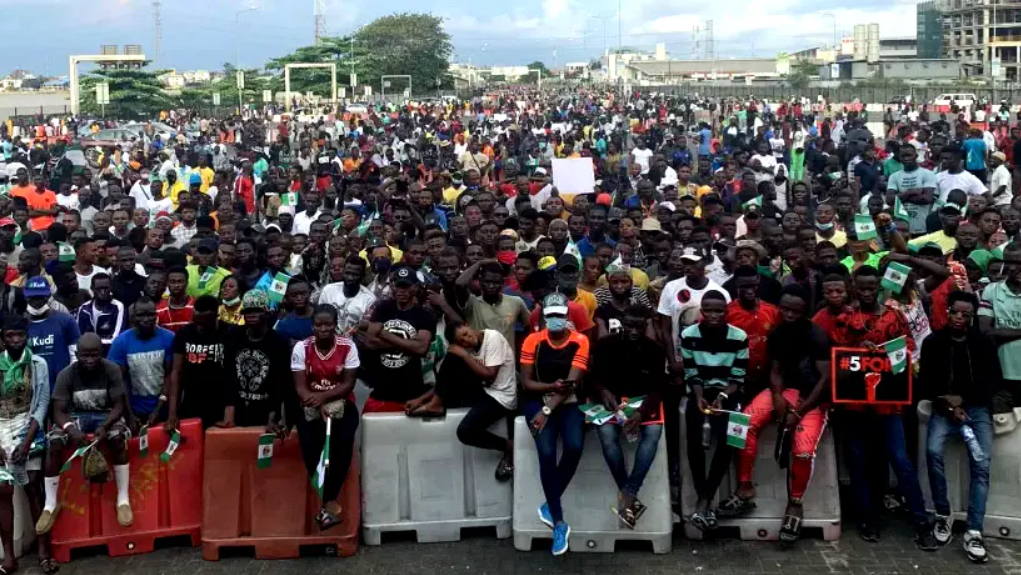 A leaked report of the Judicial Panel of Inquiry which inquired into the killing of civilians in Lagos State in October 2020 indicted the army, police and other government institutions in the murder of over 100 protesters and its cover-up

An official panel of inquiry has indicated that over a 100 unarmed protesters were killed by the Nigerian army and police in Lagos State on October 20, 2020. Officials had repeatedly denied state involvement in the atrocities on those who were demonstrating against police brutality as part of the EndSARS movement.

Eleven of the deaths had occurred in the shooting at the toll gate in the Lekki suburb, while four others, who were missing in the incident, are presumed to be dead, bringing the death toll there to 15, noted the report of the Judicial Panel of Inquiry (JPI) that was submitted to Lagos State on November 15.

96 other corpses, most of which were unidentified, were also recovered from different parts of Lagos, “lending credence to the case.. that the shootings by security agencies resulted in mass deaths within the State,” the report stated. 48 others who suffered injuries survived – 24 of them were wounded with gunshots and 15 suffered injuries due to assaults.

The report, which also indicted several civilian bodies of the State for destroying evidence to cover up the massacre, was leaked to the press amid concerns that its damning contents might be censored from the public.

“It is my view that Lagos State having appeared before the panel as a party, having tendered documents before the panel and led witnesses to take a position on the incident of the Lekki tollgate, it will be unfair and improper for Lagos State to be a judge in its cause, by seeking to review the report of the panel,” Ebun-Olu Adegboruwa, a panel member representing civil society, had opined.

It is to be noted it was Governor Sanwo-Olu who had taken the decision to deploy the army against the demonstration at the Lekki toll-gate – a decision the panel described as “totally unwarranted”, given the peaceful and orderly nature of the protest.

“Panel finds that the gathering at the Lekki Toll Gate was not that of hoodlums and cultists. They were vigilant against petty thieves and miscreants who they apprehended and handed over to Policemen… [T]hey had an effective sanitation team that cleared the protest ground daily through consistent sweeping with zero tolerance for dangerous items and weapons such as stones, sticks, guns, machetes, etc. They also had an effective crowd control mechanism,” the report stated.

“The presence of protesters at the Lekki Toll Gate did not threaten the territorial integrity of Nigeria and could not be considered as a civil insurrection to warrant the intervention of the Nigerian Army,” the report added.

“At the Lekki Toll Gate, officers of the Nigerian Army shot, injured and killed.. protesters without provocation or justification,” it noted. “The atrocious maiming and killing of unarmed, helpless and unresisting protesters, while sitting on the floor and waving their Nigerian flags, while singing the National Anthem can be equated to a ‘massacre’ in context.”

The army officers who committed the massacre were from the 65th Battalion of the 81 Garrison Division, Bonny Camp, led by Lt. Col. Sanusi Ovada Bello. The report also noted that police officers led by Divisional Police Officer (DPO) of the nearby Maroko station, Ganiyu Raji, arrived at the toll soon after the shooting by the army, went about shooting more protesters, many of whom were already dead or injured.

The shells of the fired bullets were collected by the soldiers on the night of the massacre, while the police cleaned up another round the next morning. The killings were immediately followed by a cover-up, as the army “removed many bodies and corpses of fallen protesters which they took away in their vans.”

Indicting a civilian body of the state government in the cover-up, the report further states that “Several unidentified bodies were removed by.. LASEHMU (Lagos State Environmental Health Monitoring Unit) and deposited at various hospital mortuaries in Lagos State.”

While Governor Sanwo-Olu had denied the massacre and claimed that no bloodstains were found at the protest site at Lekki toll, the panel found that “Three (3) trucks with brushes underneath were brought to the Lekki Toll Gate in the morning of October 21st October 2020 to clean up the scene of bloodstains and other evidence.”

“There was abundant evidence before the Panel that the Lagos State Waste Management Authority (LAWMA),” another civilian body of the State government, “had effectively cleaned up the Lekki Toll Gate scene immediately after the incident of October 20, 2020.”

Further, the management of Lekki Concession Company (LCC), which is a state government-owned company that manages the tollgate where the massacre took place, was also indicted for “refusing to turn over some useful and vital information/evidence as requested by the Panel and the Forensic Expert engaged by the panel, even where such information and evidence was by the company’s admission, available. It manipulated the incomplete CCTV video footage of the Lekki Tollgate on the night of the 20th of October 2020, which it tendered before the panel.”

The panel recommended disciplinary action against Lt. Col. Sanusi Ovada Bello, who had led the 65th battalion, and his senior Major General Godwin Umelo, who at the time was General Officer of Commanding (GOC) of 81 Division. Both had dishonored the summons by the panel by failing to appear before it for the inquiry.

“All officers (excluding Major General Omata) and men of the Nigerian Army that were deployed to the Lekki Toll Gate on October 20, 2020 should be made to face appropriate disciplinary action, stripped of their status, and dismissed as they are not fit and proper to serve in any public or security service of the nation,” it stated. Omata was accused by several protesters of being the main coordinator of the massacre. However, the panel found otherwise.

Another key recommendation was that “all those arrested in the course of the protest should be granted bail, prosecuted for any offense that may be alleged against them or where no prima facie evidence of culpability is disclosed upon due investigation, they should be released forthwith.”

The panel also said that “for the purpose of restitution, healing and reconciliation, the federal Government needs to publicly apologize to the youth for abruptly undermining the protest with their state actors.The Government should do all it can to bridge the gap of distrust with the Youth.”

It also called for a “monument memorializing the lives lost and those injured at the Lekki Toll Gate with the names inscribed on the Monument.” It recommended that the Lekki Toll Plaza be renamed to “ENDSARS TOLLGATE”.”

A victory for the protest movement

This is a symbolic victory for the “EndSARS” protest movement which had mobilized tens of thousands of youth across the country in October 2020, calling for the dismantlement of the Special Anti-Robbery Squad (SARS) – a notorious police unit accused of several atrocities including extra-judicial killing, rapes, torture and extortion.

“These findings and recommendations of the panel have given a renewed strength to the movement,” Leo, a protester who was active in the EndSARS agitation, told Peoples Dispatch. “If these people could be made to at least admit that this massacre really happened, then there is hope.”

However, he added, “it is for now only a report, and nothing has changed on the ground. Protesters continue to be imprisoned in large numbers.” Much resistance is to be expected by the state against the implementation of its recommendations.

While one of the tasks assigned to the panel was “to identify victims of abuse, brutality and extrajudicial killings in the hands of Officers of the disbanded SARS”, Leo maintains that SARS has never been disbanded, and continues to operate in major cities such as Abuja and Lagos under the name of Special Weapons and Tactics Unit (SWAT).

“In the southeastern and southwestern regions of Nigeria, SARS operates in its original name. People are regularly kidnapped here by SARS and held for ransom.”

Nevertheless, the findings by the panel and its recommendations is a major victory, which may serve to revitalize the protest movement, he maintained.