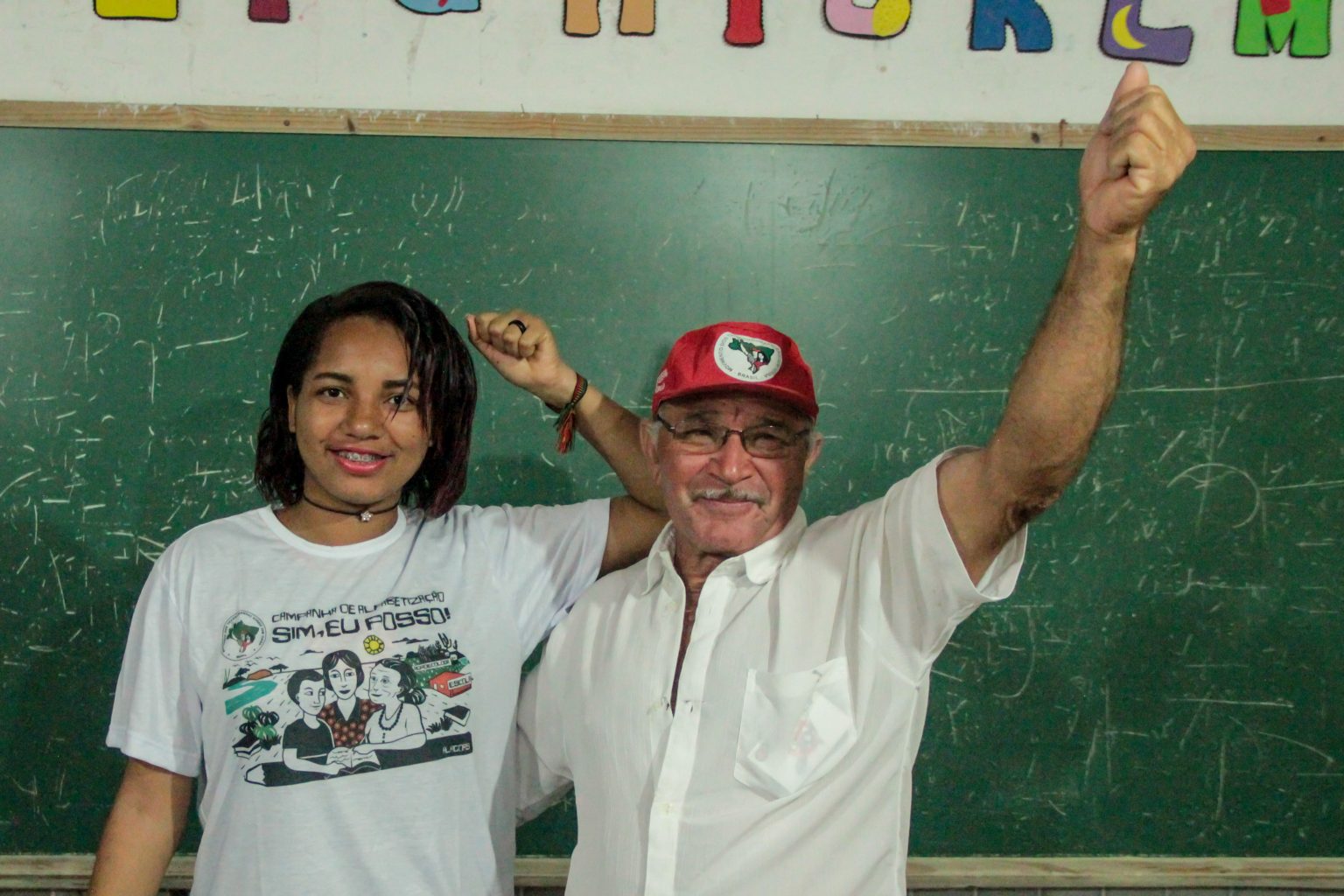 In 37 years of struggle, the MST has already enabled more than 100,000 people throughout Brazil to become literate. The work has been based on the Cuban literacy method “Yes, I can” and Paulo Freire’s Brazilian Cultural Circle

On Sunday November 14, the MST celebrated National Literacy Day, an important date for the Landless workers, who began their first experiences with Youth and Adult Education (Educação de Jovens e Adultos, EJA) together with the isolated experiences of the struggle for land in various regions of the country between the 1980s and 1990s.

In 37 years of struggle, the MST has already enabled more than 100,000 people throughout Brazil to become literate. The work is based on the Cuban literacy method “Yes I Can”, created in 1961 and Paulo Freire’s Circle of Culture and incorporated in 2016 by the MST education sector in the literacy campaign in Maranhão. The campaign was extended to peripheral urban areas, teaching 20,582 young people, adults, and the elderly to read and write. A Literacy Brigade was also created, with 1,033 educators and 192 coordinators.

During the process of struggle for land and agrarian reform, the Landless built the method, in parallel with land occupations, a process of youth and adult education based on the need for literacy and access to public education for rural workers.

From the 1990s onwards, the MST defined some political lines and started to develop pedagogical actions against illiteracy in the territories. A milestone for EJA was the launch of the MST’s Literacy Project in 1991, in the settlement of the former Annoni farm, in Sarandi, Rio Grande do Sul, which was attended by the educator Paulo Freire.

The project was developed between 1991 and 1993 in partnership with the Francisco de Assis Cultural Institute, the Ministry of Education (MEC), Caritas and the Catholic Education Action (AEC) and involved 100 literacy classes. The experience was the basis for the construction of the MST’s political pedagogical project in EJA in the Agrarian Reform encampments and settlements.
In light of this, Tiago Manggini, from the MST’s education sector, explains that the Movement throughout its history of struggle organizes several literacy campaigns with the intention of establishing unity in the literacy actions carried out in several states, as well as “fighting for public policies and creating a mística seeking to expand the literacy and schooling process for young people and adults.”

According to him, the Landless seek to trigger a “literacy process for all young people and adults in settlements and encampments coordinated by the MST who did not have access to reading and writing, contributing to these areas becoming territories free from illiteracy”, summed up Manggini. 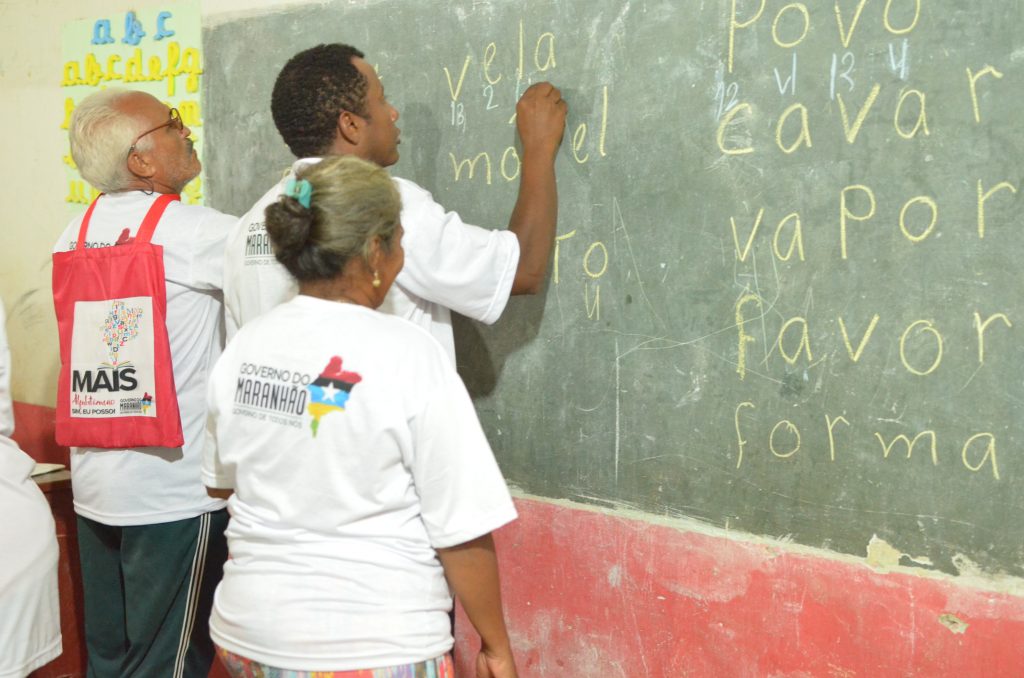 For Cristina Vargas, activist in the MST education sector, the historical experience of the MST demonstrates that the way to fight for education is parallel to the fight for land, developing concrete experiences of literacy and reflection on the reality of workers’ lives.

“The MST’s struggle for agrarian reform takes place at the same time the Movement claims access to knowledge, and it also sets out to build an educational process in a thoughtful way, based on action – reflection – action. In this way, it constitutes its history and its actions in the struggle for rural education”, points out Cristina.

In 1996 and 1997, the MST signed the first EJA agreement with the Ministry of Education, which involved 500 literacy classes and the training and qualification of 500 monitors. This was a fundamental partnership for rooting literacy projects in the MST’s base among the landless in encampments and settlements.

During this period, the establishment of two partnerships with the state government is also noteworthy; one with the Secretary of Education of the State of Paraná in 1996, involving 100 Youth Education classes, and an agreement between the MST and the Federal University of Sergipe (UFSE), signed in 1995.

Two other important events in 1997 also deserve attention in the area of ​​literacy: the 1st National Meeting of Agrarian Reform Educators (ENERA), in which the EJA experiences developed in different states of the country are shared. And the creation of the National Program for Education in Agrarian Reform (PRONERA), the result of years of struggles by people’s movements in the countryside, which through partnerships with universities and social movements enabled the literacy and schooling of young people and adults, training of educators, and undergraduate and graduate courses aimed at male and female workers, linked to movements fighting for agrarian reform in the country.

During this period, a new partnership was also signed between the MST, the United Nations Educational, Scientific and Cultural Organization (UNESCO) and the Ministry of Education, which aimed to create 680 literacy classes involving ten thousand students.

According to Tiago Manggini, in this sense, the MST’s education sector perceives the importance of EJA as a fundamental instrument in the areas of encampment and settlements, for rural schooling and the organization’s political development, while expanding the concept of EJA.
“The Landless do not see EJA only as literacy, but perceive it as a schooling process, linked to human formation in its various dimensions. This is the expression of the strength that EJA was gaining in this period. From that point onwards, the motto of youth and adult literacy in settlements and encampments was coined: ‘It’s always time to learn”, he says.