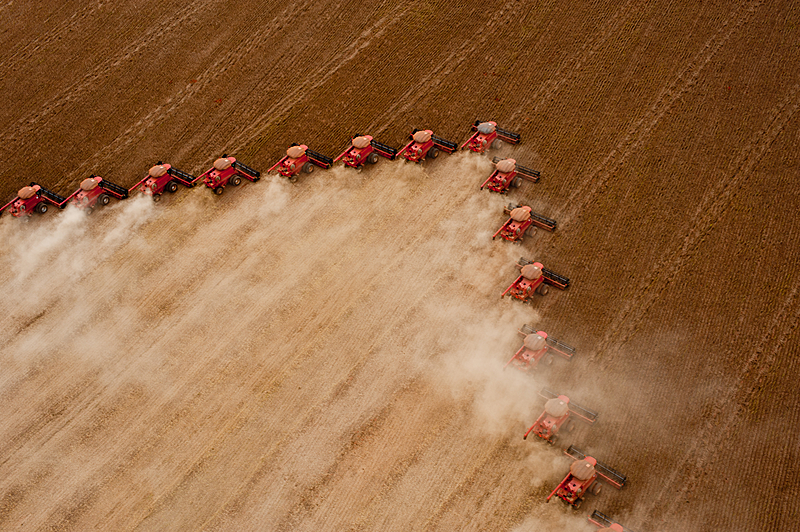 According to a study, the agribusiness sector promotes inequality, which is responsible for 55% of the Brazilian population don’t knowing if they’ll have enough food to eat next day. – Foto: Governo do Mato Grosso

Hardly someone living in Brazil doesn’t know the modern and colorful images of the “Agro is pop” TV commercial broadcasted on the Globo channel since 2016. They depict agribusiness as the major driver of the country’s economy: the “wealth of Brazil”. A counter-claim of this narrative that tries to build consensus is the study “Agro isn’t tech, Agro isn’t pop and isn’t everything”, to be published this Thursday (21) by the Brazilian Association of Land Reform (Abra, in Portuguese) together with FES Brasil. Marco Antônio Mitidiero and Yamila Goldfarb, authors of the study, show that the agro-industry doesn’t produce food for the Brazilian population, and people have seen hunger figures skyrocketing.

More than that: according to the research, the sector promotes inequality. And the inequality it produces is responsible for 55% of the Brazilian population going to sleep without knowing if it will have enough food to eat the next day.

To launch the study, there will be a live stream via the FES Brasil YouTube channel with Mitidiero, Goldfarb and guests on Thursday, at 7.30 p.m.

Based on analysis of trade balance, GDP, and Brazilian Institute of Geography and Statistics (IBGE, in Portuguese) data, the survey shows that agribusiness contributes little to the country’s Gross Domestic Product (GDP), is costly to the State, generates few jobs and is largely responsible for environmental devastation.

To understand the arguments stating that “agro-industry is not everything”, Brasil de Fato spoke with geographer Marco Mitidiero, co-author of the study and professor at the Federal University of Paraíba (UFPB, in Portuguese).

Brasil de Fato: The name of the study you have just launched makes reference and opposition to the marketing that portrays agribusiness as fundamental for Brazilian society. What are the main arguments the study raises to reveal a reality different from that seen in advertising?

Marco Antônio Mitidiero Jr.: The analysis shows that, although the agro-industry is the sector that exports most, it drives Brazil to what we call “reprimarization of economy”, which means the economy is based on producing raw materials and importing industrialized products. And although it’s world data, Brazil is ranked as one of the five countries under an intense de-industrializing process in the world market.

What about the credit sector, the low tax revenue collection, the renegotiation and cancellation of debt?

That’s the third point: agro-industry is costly to the State. The Brazilian State is responsible for most of the credits made available to agriculture and livestock. The agribusiness receives too much money while the peasant or family agriculture receives little public funds.

We also look at how much the agro-industry “pays back”. The study points out that this industry pays virtually no taxes. Therefore, it’s no wonder that everybody is exporting [agro-industrial products] while Brazil is short of food.

Another point of discussion is job and income generation. We consulted the IBGE data. The sectors that generate the fewest jobs with a formal contract and have the lowest salary are agribusiness and cattle farming. Thus, it’s a fallacy the claim that agro-industry generates jobs and revenue.

The agribusiness didn’t stop during the pandemic: it had beat production records. But unemployment in the sector kept on growing.

To finish, we took a look at the environmental impact. It wasn’t the focus of the study we developed, but should’ve been in it.

Right now, the world is talking about the climate change impacts, people are worried about the water crisis, and the dust storms, this movie like scene! We showed that agribusiness is closely related to environmental devastation.

A recent study by PenSSAN Network points out that about 20 million people in Brazil have nothing to eat. While we see the increasing hunger figures in the context of unemployment and pandemic, the data point out that agribusiness in Brazil has prospered. What does this tell us?

The production of hunger by agribusiness was shown. The king is naked. The agro-industry, with its claims, doesn’t fool anyone anymore: people are starving! There is no rice, beans, or meat. Not even eggs. At the beginning of the hunger lines, we used to see people lining because a butcher in the city of Cuiabá was donating bones. What we see now is people lining to buy bones.

Since the agro-industry isn’t the major driver of the Brazilian economy, nor what will guarantee that everybody goes to sleep being sure they’ll eat the next morning, what are the ways you consider to fight hunger in Brazil?

Indubitably, land reform is the main public policy Brazil should adopt to produce food for its population.

Another issue – we have been discussing since the Temer government and, during the Bolsonaro government, we have practically decreed dead – is the public policies to support small rural producers: they need to be resumed.

Perhaps our study reinforces – and I take the opportunity to say that this is not the case – the idea that the solution is agribusiness to produce for its population, that it was enough for us to bet on industrialization. That’s not the idea. The idea is to think about a new world.

What we did in the research was play the role of the devil’s advocate: even from the point of view of capitalism, agribusiness is bad business.