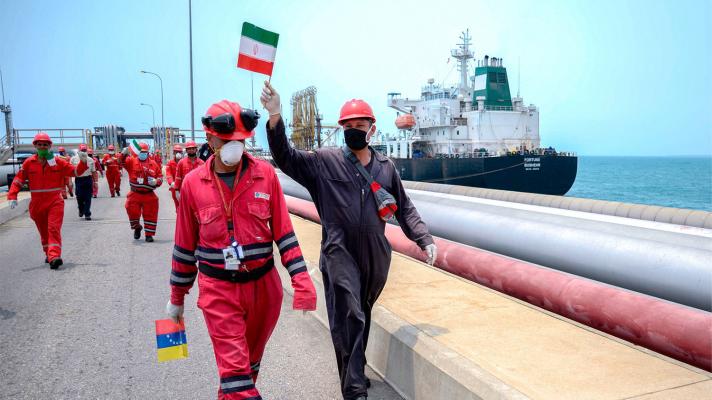 In 2009, President Hugo Chávez announced that he would sell 20 thousand barrels of gasoline per day to Iran, as a show of support to the allied country against the constant attacks and siege by the US political elite.

Days ago, the nations in question expanded their lines of cooperation, signing an agreement to exchange oil, with Venezuela offering its heavy oil for Iranian condensate, used to improve the quality of crude oil. Thus, the scoop was reported by Reuters news agency, indicating that the first shipments should be delivered this week.

Other media outside the mainstream circuit, such as The Cradle, also reported on the agreement.

These nations begin another chapter of resistance and defiance to the unilateral coercive measures imposed by the US administration, since the search for and implementation of alternatives to contain the impacts on the oil industry and increase oil production are on the table.

With the recent arrival of the new Iranian president, Ebrahim Raisi, the foreign policy strategy has become much more dynamic. This exchange agreement is an opportunity for Iran because it increases its oil revenues and would solve its condensate storage difficulties. The Persian country currently produces more than 550 thousand barrels of gas condensate daily, exporting a portion to foreign destinations and another portion is used as raw material for domestic refineries.

The agreement translates into the second oil cooperation between Iran and Venezuela at the height of the US “sanctions” in recent years. The expansion of this cooperation, in addition to the economic benefits for the parties, also sends an important message to countries around the world that U.S. coercive measures are not recognized and are outside international law.

It is worth noting that, so far, the news of the swap agreement has made no mention of benefits specifically for Venezuela, beyond the fact that Caracas can use the gas condensate received from Iran to improve the quality of crude oil such as bitumen, which is shown to be a major advantage.

According to Reuters, the swap contract for Venezuelan heavy oil and Iranian gas condensate will be implemented in the first phase in six months and, of course, it is possible to extend it. Statistics published by tanker shipping companies such as Tanker Trackers have identified the first of the vessels involved in the swap, the Iranian-flagged VLCC Felicity, at the Jose (Anzoátegui state) oil terminal complex in Venezuela.

It is not clear which scenario the two countries are considering to take advantage of this agreement, because both Venezuela and Iran are endeavoring to publish as little information in the media as possible due to the context of the US siege. But whatever these scenarios are, they are defined by a mutually beneficial interaction between the two countries.

Currently, Iran and Venezuela produce heavy gas condensate and heavy oil, respectively; both products are difficult to trade and sell without “sanctions”, however with the imposition of sanctions, the export of these products by the two countries has become practically impossible. As a result, the contract signed by these countries manages to maintain and mix these two products to facilitate commercialization and export.

By blending Venezuelan heavy crude oil and Iranian gas condensate, it is likely that a product will be obtained that can be used in refineries around the world and, of course, the newly created blend can be used in the domestic refineries of both countries.

It should be noted that there are only 26 condensate refineries in the world, which indicates a low diversity of customers in the global market for this product, and this market has expanded due to the consumption of natural gas worldwide in recent years.

In response, the U.S. Treasury Department said in an email to Reuters that the deal would potentially violate U.S. “sanctions” targeting both countries: “transactions with CNPI by a non-U.S. person are generally subject to secondary sanctions.

The U.S. sanctions programs not only prohibit U.S. commercial cooperation with the Iranian and Venezuelan oil industries, but also target “secondary sanctions” on any non-U.S. individual or company that trades with any of its oil companies.

In early September, Venezuelan Foreign Minister Felix Plasencia explained that a common work agenda can be coordinated with Iran in view of upcoming multilateral meetings such as the Non-Aligned Movement (NAM) Summit.

Clearly, cooperation between countries “sanctioned” by the United States is being extended. Extending Iran’s cooperation with the other U.S. sanctioned countries with large-scale multilateral planning can lead to the realization of the idea of forming a group of countries against unilateral coercive measures and taking coordinated next steps in this direction.