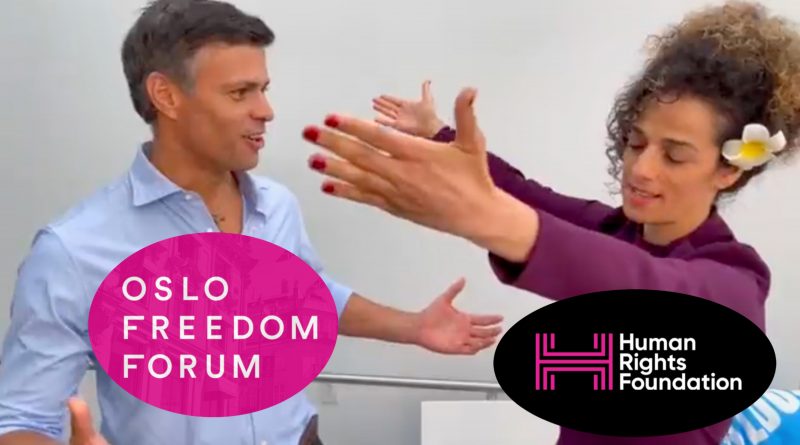 The world’s most distinguished CIA pawns are mixing and mingling once again at the Oslo Freedom Forum in Miami Beach.

Venezuelan terror leader Leopoldo Lopez and the main individual tasked with propagandizing for the overthrow of the Iranian government, Masih Alinejad, got together on the sidelines of the Washington puppet convention, held at the New World Center. Alinejad, who earns hundreds of thousands heading the CIA-funded Voice of America, shared a giggle with the white collar guarimba leader, agreeing to work together “in a network of freedom fighters” against actual legitimate governments.

Wondering which governments the U.S. and its allies may be plotting to overthrow next? There's an annual convention for that: It's called the Oslo Freedom Forum and it's put on by the Human Rights Foundation.

US-backed Russian opposition operative, Alexey Navalny, was one of the headlining acts of the two day forum, along with his coup leading counterpart in Belarus, ​​Sviatlana Tsikhanouskaya.

The convention also welcomed an array of operatives dedicated to overthrowing or propagandizing for the ousting of the governments of China, Cuba, Nicaragua, with rallying calls prescribed by Washington think tanks and the foremost spook agency itself.

Human Rights Foundation (HRF), which organizes the Oslo Freedom Forum (OFF), also put together a lengthy ‘Bitcoin Academy’ to promote the use of Bitcoin, particularly in Nayib Bukele’s El Salvador.

While the HRF markets itself as an entity which serves to “promote and protect democracy and human rights around the world, with a focus on authoritarian regimes”—it’s difficult to find anyone in or around the Foundation or its Forum which are not, at minimum, indirectly employed by the U.S. Department of State.

The cynical bunch includes Bolivian coup operative and Jeanine Añez ally, Jhanisse Vaca Daza, who describes herself as the founder of the subversion front ‘Rios de Pie’ (‘Standing Rivers’) and a Network Manager for both HRF and OFF. Rios de Pie has no known members or activities in Bolivia but maintains its propaganda campaigns through its social media accounts, in tune with ventriloquist dummies like Juan Guaido, for whom the United States erected an entire parallel online ‘government’ despite not existing outside of Twitter.

The fake human rights entity was founded by US-based Venezuelan oppositionist Thor Halvorssen, the cousin of Leopoldo Lopez. This year’s participants hope to breathe new air into destabilization and disinformation campaigns in Cuba, China, Nicaragua, Venezuela, Iran, Belarus, and Russia, among others.