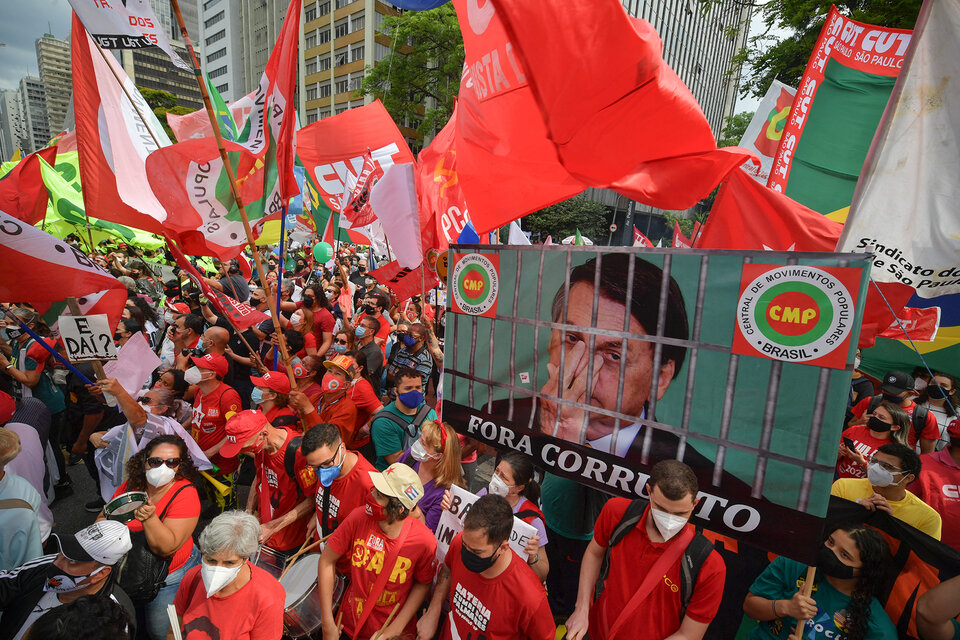 Similar to the resistance against the dictatorship. A dozen parties together with unions and social movements participated this Saturday in mobilizations in which the dominant slogan was “Bolsonaro out”, together with other slogans on the socio-economic crisis and corruption.

A fact: this day of struggle also achieved the support (although they did not participate in the organization) of conservative groups that had kept their distance from the rallies carried out since the end of May by the democratic-popular camp.

For some, what happened this Saturday in the center of São Paulo and in about three hundred cities in which there were around 600 thousand people, according to the Central of Popular Movements (CMP), is comparable to the unitary marches, covering a wide political spectrum, which demanded from the dictatorship in 1984 the realization of “Direct Elections Now”.

37 years ago the country was under the whip of General Joao Bapitista Figueiredo (he boasted of being a good horseman), a dictator who liked the smell of horses more than the smell of the people ( so he said ), for whom Bolsonaro often expresses his “saudades”.

“Nice rally on Paulista Avenue with more political forces, union entities and civil society, the expansion of the unity of these forces is being built with the common goal of removing Bolsonaro,” summarized Gleisi Hoffmann, the president of the Workers’ Party (PT).

According to Augusto Bomfim, of the CMP, “we wanted these marches to have room for all the banners and we are also getting more participation from the population in the periphery”.

In turn, Djalma Bom, PT militant, who was imprisoned in 1980 together with his comrade and metalworkers’ leader Luiz Inácio Lula da Silva, pointed out: “We came to fill Paulista Avenue with people to get rid of these fascists who are oppressing the people. In 1984 we fought to get rid of the milicos, in 2021 we have another juncture ,now we come to defend democracy. Bolsonaro and the army have coup DNA, they will always want to carry out a coup”, assured Bom in a telephone interview with Página/12.

Last September 7, Independence Day, Bolsonaro gathered some 125 thousand people in Sao Paulo, far from the million he had promised throughout weeks of agitation and propaganda in favor of a coup attempt. The attempt failed. For now.

This Saturday, Sao Paulo was the scene of the most crowded rally in the country with a caravan of big trucks equipped with loudspeakers, from where the leaders delivered their speeches before tens of thousands of people.

The audience was heterogeneous: militants of left-wing and democratic parties, activists of the homeless movement, groups linked to the LGBT cause and unionized workers. These tribes with their predominantly red flags, accompanied the speeches, while other citizens without party affiliation circulated along the avenue without stopping before the speakers and, sometimes, making jocular comments on the dolls dedicated to parodying the president.

One of the main speakers was Fernando Haddad, presidential candidate in 2018 for the PT, when Lula could not run due to a multiple conspiracy: on the one hand the judicial one through the forced convictions in the Lava Jato case to which was allied the pressure of the army to prevent the freedom of the petista while he stood behind the candidacy of Bolsonaro.

“We are here in the Paulista giving an answer to September 7 when this avenue was occupied by Bolsonaristas, now we decided to double the bet. Every time Bolsonaro threatens us we will double the bet for democracy”, Haddad promised.

In his speech, the leader of the Homeless Workers Movement (MTST), Guilherme Boulos, put the accent on social issues. “The real Brazil is the one that is standing in line (in butcher shops and meatpacking plants) waiting for a bone. The real Brazil is suffering from genocide, unemployment and hunger,” said Boulos, of the Socialism and Liberty Party (Psol).

A ten-meter-high inflatable doll caricatured the far-right president with Dracula-like comrades a few meters from where Haddad and Boulos spoke. In one hand the parody of Bolsonaro carried a box of “Chloropropine” brand medicine, apocope of hydroxychloroquine, the drug he recommended against the coronavirus, knowing that it does not fight that ailment, and “propina”, a word that in popular language means “bribe”.

From the drones flying over the avenue, dozens of large balloons of the Central Unica de los Trabajadores (CUT) could be seen. Below, on the asphalt, there were young people jumping like in the stands of a soccer field, chanting slogans against the Paulista Military Police in whose ranks there are Bolsonarite elements, as happens in the security forces of several states.

The São Paulo rally began in the afternoon after the one in Rio de Janeiro, where thousands of people walked through the center behind black banners with the slogan “Bolsonaro Genocida” (Bolsonaro Genocidal). The Single Federation of Oil Workers carried replicas of giant, orange gas cylinders (like the oil workers’ jumpsuits) with the price of 15 reais and the phrase, “Is it expensive. It’s Bolsonaro’s fault.”

In Brasilia there were expressions of repudiation against Bolsonaro for his policy before the Covid-19, with posters branding him as “Genocidal” and demanding that there be more “vaccines in the arm and food on the plate”. The Parliamentary Commission of Inquiry on the pandemic (CPI) confirmed that the President pressured to delay the purchase of Chinese Coronavac and American Pfizer vaccines, despite having received offers for tens of millions of doses.

In the Esplanade of the Ministries, in the center of Brasilia, the criticism of the retired captain was mixed with ironies directed to his wife, Michelle, involved in a scandal of influence trafficking in the state bank Caixa Economica uncovered last Friday. In spite of her overacted marketing as an evangelical and submissive woman, Mrs. Bolsonaro apparently pulls strings within the mafia organization that operates under the protection of the family clan, in which her father and four sons also participate.

Under a cloudy sky, students from the University of Brasilia walked along the avenue with placards dedicated to the first lady with the nickname “Mi-cheque”. This nickname that joins the words Michelle and check comes from another shady case aired years ago: according to official documents of an agency under the Ministry of Economy, the presidential wife received checks from an alleged paramilitary hired to launder money illegally pocketed by the family.

Bolsonaro came to power after a campaign in which he promised to adhere to an uncompromising morality that his Minister of Justice, former judge Sergio Moro, the man responsible for Lava Jato, was going to watch over. But as the months went by, the evidence of corruption became undeniable while Moro took measures to cover up for his boss. In today’s marches in Brasília, São Paulo and Rio de Janeiro there were posters against government corruption and dollars with the ruler’s face on the bills.

In a year’s time

The thousands of Brazilians who occupied the avenues of the Brazilian capitals give proof of the size of the discontent against a government with barely a thousand days in office.

What was seen this Saturday is repeated in the polls. All indicate that Bolsonaro would be defeated by ten or more points by Lula in the first round of next year’s elections, and in a runoff the difference would exceed twenty points.

These polls also indicate that Lula would beat any of the possible candidates of the non-fascist right, among them Joao Doria, the governor of Sao Paulo and candidate for the Brazilian Social Democracy Party (PSDB), of former president Fernando Henrique Cardoso.

It is not mere coincidence that the PT and other organizers have chosen to protest against the government this Saturday: exactly one year before Sunday, October 2, 2022, when the presidential elections will be disputed.

On Oct 2 an estimated 700,000 people came to the streets of 300 towns and cities to demand the ouster of far right Brazilian President Jair Bolsonaro. My story for @telesurenglish pic.twitter.com/PmVRHiLzmO