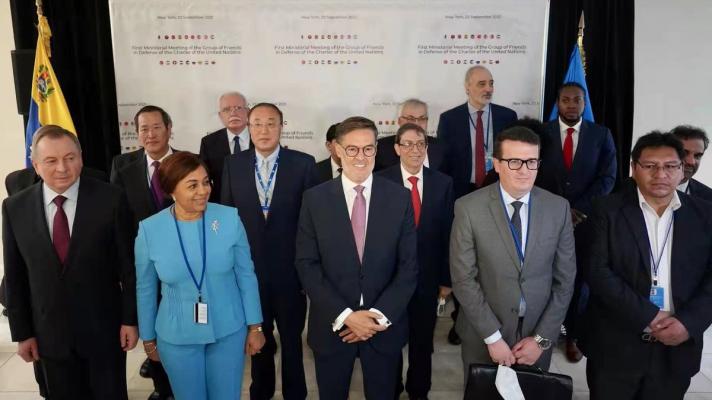 The First Ministerial Meeting of the Group of Friends in Defense of the United Nations Charter, also know as the UN Anti-Sanctions Group, was held this Thursday, September 23, in New York, USA, at the Venezuelan Diplomatic Mission to the United Nations. The meeting was attended by representatives of 18 countries that promote multilateralism, compliance with the declarations of the United Nations’ founding charter, and denounce illegal coercive measures (or “sanctions”), within the framework of the 76th UN General Assembly in New York.

According to experts, there are more than 33 countries illegally sanctioned by the United States government and the European Union without proper authorization by the UN Security Council, and the number keeps growing. For this reason many experts suggested the foundation of a group of “sanctioned” countries to cooperate and develop strategies to counter the illegal economic measures taken unilaterally by some governments in the North.

Venezuelan ambassador to the United Nations, Samuel Moncada, posted on his Twitter account information about the historic meeting: “Today, at the Venezuelan Mission in New York, ministers from 18 countries meet to defend international law with the Group of Friends of the United Nations Charter that will act in all UN headquarters in the world. A victory for diplomacy and peace.”

This meeting generated a final Declaration that we present below:

1. We, representatives of Algeria, Angola, Belarus, Bolivia, Cambodia, China, Cuba, the Democratic People’s Republic of Korea, Equatorial Guinea, Eritrea, Iran, the Laos People’s Democratic Republic, Nicaragua, the State of Palestine, Russia, Saint Vincent and the Grenadines, Syria, and Venezuela, met at the ministerial level, in New York, on the sidelines of the High-Level Week of the 76th Session of the General Assembly of the United Nations, in order to undertake an assessment of recent developments in the international arena, including of challenges and threats to the Charter of the United Nations, which underpins multilateralism, and to exchange views on existing, new, and emerging issues of collective concern and common interest.

2. We recall the declaration adopted on 6 July 2021, in New York, at the ambassadorial level, and reaffirm that the Charter of the United Nations and its purposes and principles remain timeless, universal, and that they are all indispensable, not only for preserving and promoting international peace and security, the rule of law, economic development and social progress, as well as all human rights for all, but also for achieving a more peaceful, prosperous, just, and equitable world, and a system based—precisely—on the rules contained in that universal and legally binding instrument that constitutes an exceptional achievement for humankind and a true act of faith from the best of humanity.

4. We express our serious concern at the growing resort to unilateralism, in detriment not only to multilateralism, but also to international cooperation and solidarity, which must be deepened now more than ever, in the context of the COVID-19 pandemic, in order to forge collective, inclusive, and effective solutions to the common challenges and threats of a 21st century of interconnectedness. Hence, while renewing our firm commitment to a reinvigorated multilateralism that shall have the United Nations at its center, we convey our support to nations and peoples subjected to unilateral and arbitrary approaches that violate both the purposes and principles enshrined in the Charter of the United Nations and the basic norms of international law, and renew our call for the full respect to the inalienable right of peoples to self-determination, as well as the territorial integrity and political independence of all nations.

5. We invite those members of the international community that are committed to the purposes and principles enshrined in the Charter of the United Nations, with the prevalence of legality over force, with the values of dialogue, tolerance and solidarity, as well as with an effective and inclusive multilateralism, in which all regions and all sizes of states are equal and engaged alike, to consider joining our Group of Friends and/or endorsing this Declaration at their earliest convenience, as part of our common efforts to advance our common agenda and to ultimately keep delivering on the promise of the Charter of the United Nations and ensuring that no one is left behind.