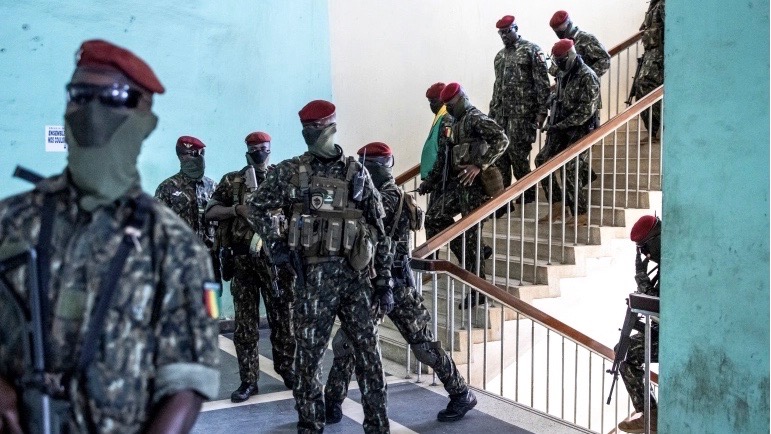 Colonel Mamady Doumbouya (fourth right) and members of the special forces leave the Peoples Palace after the first session of talks with political leaders in Conakry. (Photo: John Wessels/AFP)

The coup leader, Colonel Mamady Doumbouya, has claimed that he will put an end to the corruption and human rights abuses committed under the rule of ousted president Alpha Conde, whom he had served as a henchman. However, his close links to the US and France indicate other motives behind the coup

Over a week after the coup in Guinea was orchestrated by a US-trained military unit, the military junta that seized power initiated a four-day-long conference with political parties, business leaders and traditional leaders on Tuesday, September 14.

The stated reason for this conference is to reach an agreement on the duration and arrangements for the transitional period before civilian rule can be restored. It was clear from the outset that few of the main opposition parties sitting opposite the junta on the table were keen on pushing for a speedy transition to civilian rule. Smaller political parties reportedly did not get through the registration to attend the conference.

“It’s very difficult to want to impose on (coup leader) Colonel (Mamady) Doumbouya a civilian president – but it would be desirable that the prime minister was a civilian,” former prime minister Cellou Dalein Diallo of the Union of Democratic Forces of Guinea (UFDG), a leading opposition figure who lost three consecutive elections to deposed president Alpha Conde, told AFP a day before the meeting.

Describing the coup as a “welcome development,” he went on to urge the Economic Community of West African States (ECOWAS) – which, along with the African Union (AU), suspended Guinea from the regional bloc after the coup – to not impose sanctions on the junta. Abdoulaye Oumou Sow, spokesman of National Front for the Defence of the Constitution (FNDC), an umbrella organization of opposition parties, joined Diallo in insisting that Conde should remain in the custody of the junta.

“We all know the friendship he has with some heads of state in the region. We know that he is rich and has all the means to want to return to power,” Sow said. These comments were an apparent response to the call by ECOWAS for Conde’s release.

A delegation of ECOWAS which met the junta in Guinea’s capital Conakry on September 10 reported that Conde was in good health and was insisting on his reinstatement to the presidency.

Following the visit, Fanta Cisse, Guinea’s stand-in foreign minister, said that it was not possible to immediately respond to the regional bloc’s request to free Conde, but “the principle is recognized.”

No progress was made in the meeting on Tuesday towards returning to civilian rule or securing Conde’s release. As the conference continues, the junta will reportedly hold talks with regional government representatives followed by the so-called “traditional leaders”, among whom Conde does not enjoy much popularity, especially in the south where he faces considerable opposition.

The talks with the representatives of the mining companies will be critical as they are likely to be treated by the junta as the most important stakeholders in the country. Guinea is the second largest producer of bauxite, used to make aluminum, amounting to a fifth of the global supply.

Aluminum prices, which were already on the rise, spiked to a 13-year-record high after the border closure following the coup due to concerns of disruption. However, the mining companies were amongst the first to get an assurance from the junta that their work will not be disrupted, and were urged to continue digging.

Mining companies have welcomed this assurance and reported that their activities have not suffered any disruption. This, at least for now, means that the record price rise has placed them in a very profitable position. It is unlikely that the representatives of these companies will insist on a speedy transition to civilian rule. However, it is important to note that mining interests are not homogeneous, and may have been an important influence behind the coup.

China also has major investments in Guinea under the Belt and Road Initiative, and has been crucial in advancing the railway line between Guinea and Mali – another West African country, which witnessed two of the four successful military coups in this region in the last year. Here too, the coup leader was trained by the US.

Russian company Rusal is also among the main bauxite explorers in Guinea. Before the coup, “Conde was interested in taking advantage of the partnership in the aluminum and bauxite business to increase economic cooperation and seek more Russian investments in Guinea,” wrote Lucas Leiroz, a research fellow in international law at the Federal University of Rio de Janeiro.

“In June of this year, Conde sent a delegation of officials to Russia, during the 24th St. Petersburg International Economic Forum, with the intention of starting a bilateral dialogue to attract more investment in Guinea, mainly in the infrastructure sector, which is a strategic point for the implementation of national development policies. In fact, Conde saw Russia as an opportunity for strategic international cooperation between two emerging nations, just as other African countries have seen in China, for example,” he said.

Whether the junta will make attempts to renegotiate the Russian and Chinese projects in the interest of their western competitors will be crucial to watch. Keeping these two countries at bay on the continent has been the stated reason for the existence of the US Africa Command (AFRICOM), which, despite its denial, has played a crucial role in the coup.

“The U.S. government and military are not involved in this apparent military seizure of power in any way,” AFRICOM said in a statement after a video showing Guinean soldiers escorting the American Green Berets back to the US embassy after the coup surfaced on social media.

The New York Times reported that a “team of about a dozen Green Berets had been in Guinea since mid-July to train about 100 soldiers in a special forces unit led by [coup leader] Colonel Doumbouya, who served for years in the French Foreign Legion, and took part in American military exercises..”

Critics find the newspaper’s claim that amidst the training, the students “peeled away for a mission not listed” and “mounted a coup” to be a laughable attempt at concealing AFRICOM’s obvious role. “If the Americans are involved in the putsch, it’s because of their mining interests,” a teacher in Conakry was quoted as saying.

In this situation, the ousted president seems to be unable to muster much support. None are reported to have taken to the streets to protest the coup, which appears to have received a popular welcome.

How Alpha Conde dug his own grave

Once a persecuted pro-democracy activist, Conde became the first democratically elected president of Guinea in 2010, following a massacre by the then ruling military junta in 2009 in which 157 protesters were killed and over 100 others were raped.

Conde’s promise to bring the guilty officers to justice was amongst the first he broke after coming to power, disappointing the victims and their families. In the decade that followed under his rule, the “U.S. authorized $4.8 million in weapons sales, provided $9.06 million in security assistance, and trained 1,326 soldiers in Guinea,” according to Cato Institute.

With such foreign backing for his security forces, Conde, who was once seen as the hope of democracy in Guinea, fell for the trappings of power and was unaccountable to the voters who elected him. Corruption remained widespread, while human rights abuses and violent crackdown on protesters and opponents continued unabated.

In 2018, Conde invited future coup leader Colonel Doumbouya, who was serving in the foreign legion of Guinea’s former colonizer France, to take charge of the Special Force Unit he had set up. This new unit was “a security instrument at his disposal for specific repressive missions,” Mamadou Aliou Barry, a Guinean political analyst, told Radio France International (RFI). Later in the year, Doumbouya was also trained by AFRICOM.

The proverbial ‘last straw’ came in 2020 when Conde held a referendum to change the constitution to allow him to contest for a third presidential term, which he won with the use of force against his opponents, killing dozens of protesters.

By holding on to power in this way, Conde lost much of the popular support and dashed the hopes for a meaningful democracy under his increasingly dictatorial and violently repressive rule. The ECOWAS and the AU, which are now condemning the coup, are being called out by many progressive voices on the continent for responding ‘too little, too late’, having failed to intervene in 2020 to prevent Conde from sowing the seeds for a return to military rule.

An increasingly desperate people, looking for relief from Conde’s rule, took to the streets in hundreds to celebrate the coup. Coming a full circle, Colonel Doumbouya, who is himself accused of having perpetrated many atrocities at Conde’s behest, has now promised that the purpose of seizing power is to put an end to corruption, mismanagement and human rights abuses – the very promises Conde had made and betrayed.

The real purpose of the coup by a colonel with a history of serving the former colonizer and training under the US will become clear in due course. The reorientation of the flow of Guinea’s mineral wealth and its geopolitical relations will be crucial indicators to watch for in the coming period.