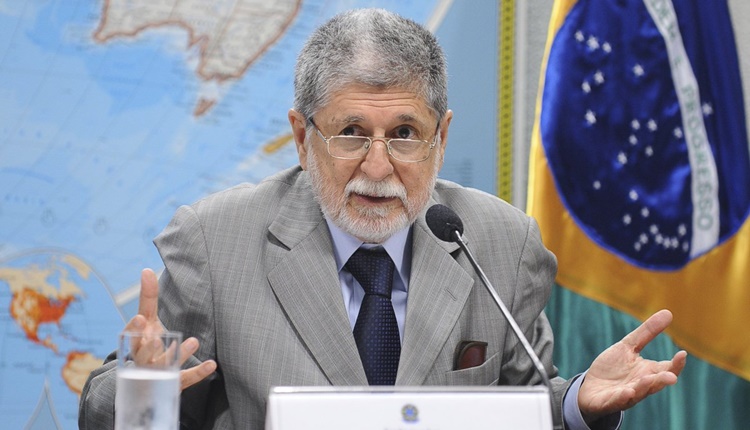 Supporters of Brazil’s ultra-right-wing president, Jair Bolsonaro, have called for marches on Tuesday, September 7, against the Supreme Federal Court (STF). Faced with an almost certain electoral defeat to the former president Lula da Silva, Bolsonaro is putting pressure on the other branches of government to delegitimize the elections scheduled for 2022. Rumors of a self-coup are gathering strength and Brazilian democracy seems to be increasingly weak.

To understand the dangers implied by Bolsonaro’s stance and his followers, Contexto talked to Celso Amorim, a renowned diplomat with a long and distinguished career inside and outside Brazil. He was foreign minister in the government of Itamar Franco (1993-1994), permanent representative of Brazil to the United Nations (1995-1999), ambassador to the United Kingdom (2001-2002); he returned to be foreign minister during the governments of Luiz Inácio “Lula” da Silva (2003-2010) and defense minister during the government of Dilma Rousseff (2011-2014).

Below is the video with the complete interview and an excerpt with the highlights of the interview:

Marches and rumors of self-coup

“It is very striking that President Bolsonaro canceled the parade on September 7, the commemoration of Brazil’s independence. I don’t know the reason why because he has never been concerned about the pandemic, he has said it was a gripecita. And he is going to go to other events far more crowded in Brasilia and in Sao Paulo, in the two largest gatherings. Besides that there are other marches being called by his supporters, with his blessing, obviously. Some of them say that people should be armed, carry their rifles.”

“What I see is that Bolsonaro knows he is not going to win the next election. All the polls give, at least, twenty points of advantage to President Lula. Bolsonaro would lose even with someone else, but President Lula is the overwhelming favorite, he has close to 50% support for the first round and between 55 and 60% for the second round.”

“Bolsonaro knows he would lose, so what was his intent? Initially, he tried to delegitimize the election by saying it was unreliable. Everyone knows that elections in Brazil have long been very reliable. There were elections in states where the advantage for the winner was 0.2% and they were not questioned.”

“Bolsonaro was thinking of disqualifying the elections, but I think he is seeing a very large opposition to those attempts, from the Supreme Court, from a large part of the National Congress, especially the Senate, despite the fact that it is not a progressive Senate, it is a Senate with a conservative majority. And there is also a large opposition from the population in general. So what Bolsonaro is trying to do is advance the crisis. I cannot say that he is planning a coup because, with Bolsonaro everything is highly unpredictable. But he does want to create confusion and chaos and in the middle of the confusion there might be a part of the Military Police, which is very important in Brazil, a large part – it is said – is close to Bolsonarism, besides that, he is always encouraging the arming of the population, which means, in reality, militias, irregulars that will be able to act as in Bolivia.”

“To complete this political-military picture, there is, at least, a neutralization of the Armed Forces. I personally do not think that a military coup by the Armed Forces is likely, but it may be that the Armed Forces will be divided and paralyzed in the face of a coup attempt that will be led by the Military Police, by the militias, and so on.”

“Bolsonaro’s script is Trump’s script, although he is having to anticipate it.”

“Yes, I think there is a script for that, I cannot talk about all the countries because I think there are differences, and nuances in the situations, but I see that today the Brazilian government is the epicenter of the international extreme right. Before it was Trump, but since he obviously lost the election, Trump’s followers have a lot of strength, a lot of economic power, but they don’t have the instruments of government. Interpreting the words of Steve Bannon, in a recent cyber conference of the extreme right in the United States, in which Bolsonaro’s son was present, Steve Bannon said that it was necessary to act in the Brazilian election, because it is the second most important in the world (obviously the first one is the United States).”

“They want to defend in every possible way the permanence of Bolsonaro in power because, if Bolsonaro loses the extreme right will leave Latin America.”

“Today in Brazil a great democratic front is essential and, for that, a minimum of civilized dialogue between the different factions is necessary. Unfortunately, I don’t know if it is because he wants to attract Bolsonaro’s votes, Doria has taken a very aggressive attitude in relation to Lula.”

“It may be that there will be a second round in which Bolsonaro will not be there. Because Bolsonaro has been falling in the polls. They say he has a fixed 15 or 20 %. But, the inflation that there is in Brazil, which is an inflation very concentrated in staple products, can make Bolsonaro’s fall faster than it was thought, that’s why he is also looking for this agitation, that’s why he wants to create a climate of civil war. There is a climate of civil war being created in Brazil.”

“I don’t think it’s going to happen, but I’ve never seen Brazil with a specter of civil war so close. A spectre that is being invoked, that is being called upon, and it is not being called upon by the poor people, the one summoning it is the president. He may not have used that expression ‘civil war’, but he used words that, interpreted by the most radical sectors of his followers, mean exactly that”.

Lula can change the future of Brazil and Latin America.

“It is necessary to understand that Lula is a reformist, that Lula wants greater independence, greater integration. All that is true. But it is also true that Lula is a man of dialogue. Lula firmly defended our interests (Brazil’s and Latin America’s). But always through dialogue.”

“Lula is not going to be subordinated to the Americans, but neither to China.”

“I believe that with Lula, with Alberto Fernandez, with AMLO, with Arce, etcetera, Latin America and the Caribbean can be relevant in the redesign of the international order that is indispensable after the inequality crises, the pandemic crisis, and for this we need to stand together and a Lula victory can contribute significantly to this.”