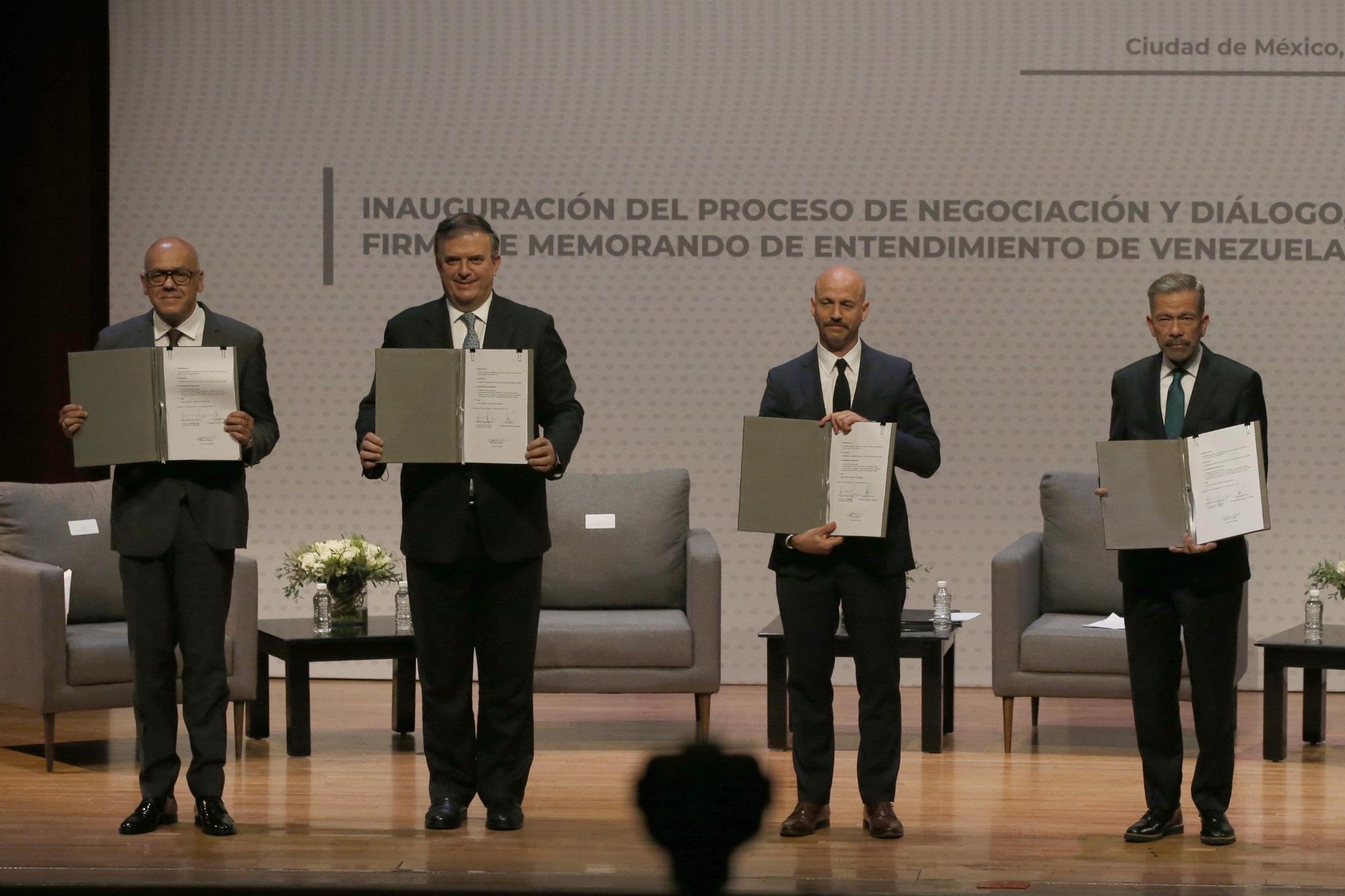 There are high hopes surrounding the upcoming round of negotiations between the Venezuelan government and the extreme right-wing of the opposition. The sides are set to meet on September 3 in Mexico after having signed a memorandum of understanding in August.

That document established a 7-point agenda with a broad scope that encompasses elections, political rights and the economy, among others. It calls for lifting the sanctions and ending violent coup attempts. These talks have the potential to end years of political and economic instability caused in large part by U.S. intervention.

Despite the intense pressure imposed by the Trump administration, the Maduro government enters the talks in its strongest position in years. The governing PSUV party swept legislative elections in 2020. The response to the pandemic has been successful, despite dire prognostications. Left-wing victories in presidential elections in Mexico (2018), Argentina (2019), post-coup Bolivia (2020) and Peru (2021) have eased regional pressure. Currently, the threat of an invasion or coup is almost non-existent.

Conversely, the opposition faction in these talks – extremists because they supported the sanctions and attempted several coups while boycotting elections – enters divided and weakened. This coalition includes various opposition parties, including Juan Guaidó’s Popular Will and Henrique Capriles’ Justice First. Capriles, a two-time losing presidential candidate, has broken with Guaidó and no longer recognizes the “interim government”, while fellow party member Julio Borges continues to pretend to be Guaidó’s foreign minister.

For his part, scandals continue to plague Guaidó. It was recently revealed that Guaidó’s team spent $6.5 million in legal fees to challenge ownership of $2 billion in Venezuelan gold held in the Bank of England. The money to pay the lawyers came from accounts frozen by the U.S. government and handed to Guaidó. The legal challenge blocked the gold from being used to buy food and medicine for the Venezuelan people in a deal that President Maduro and the UN Development Programme agreed to in May 2020.

Citgo was among the other assets handed to Guaidó by the Trump administration. The oil company posted $667 million in losses in 2020. Due to the sanctions, its charitable wing, the Simon Bolivar Foundation, was initially blocked from financing treatment for Venezuelan children with rare cancers. The Venezuelan government also saw its attempts to pay blocked by the international finance system. Once Citgo was given to Guaidó’s people, the Foundation was free from the sanctions, yet it decided to stop paying for the treatments. Fourteen children have died while waiting for treatment, victims of both cancer and an economic war.

Guaidó repeatedly defends U.S. sanctions, while 71% of Venezuelans believe they’ve had a negative impact on the country. He also attempted several coups, authorized a contract with mercenaries that could have sparked a civil war, his appointees are mired in corruption scandals and he was photographed with Colombian paramilitaries. It’s no wonder he’s polling at 4%.

Some of his most die-hard supporters are souring on him. In a recent opinion for The Hill, Elliott Abrams, Trump’s special envoy on Venezuela, referred to Guaidó as leading “opposition forces” rather than as interim president.

Abrams believes the Guaidó-led opposition can accomplish three things through these talks: concessions, getting President Maduro to acknowledge the opposition exists and “minimal conditions” for regional and municipal elections in November.

Talk about moving the goalposts! For years the Trump administration insisted it would only consider talks if Maduro first resigned. Now one of the primary enablers of Trump’s disastrous Venezuela policy is asking for the extremist opposition to temper its expectations.

This is a welcome development, as the Trump administration was instrumental in sabotaging attempts at previous dialogues. In 2018, the two sides were about to sign a landmark agreement, when U.S. officials threatened an oil embargo, said a coup would be welcome and refused to recognize elections before they had even been scheduled.

In August 2019, the two sides had barely sat down when the Trump administration imposed an economic embargo on Venezuela’s public sector. This derailed talks between the Guaidó faction and the Venezuelan government, but within a month, President Maduro and other opposition leaders returned to the negotiating table.

These leaders represent the moderate wing of the opposition, moderate in the sense that they reject sanctions and violent coup attempts. Their ongoing dialogue with the government has yielded important results. They received sufficient electoral guarantees that convinced them to participate in the 2020 legislative elections. They negotiated a new makeup of the powerful five-person National Electoral Council, increasing the opposition’s presence from one person to two. The two sides also formed a Special Commission for Dialogue, Peace and National Reconciliation within the National Assembly, where a member of the opposition leads the Foreign Affairs Committee despite not having a majority in the legislature.

Moreover, the Maduro government has granted other concessions. It has partially liberalized the economy, in large part due to the sanctions. It engaged in dialogue with Fedecamaras, the country’s main business association, taking steps to overcome a  historically tense relationship. The government even released the Citgo 6 into house arrest. The U.S. has long called for the full release of these Venezuelans (some of whom have dual citizenship with the U.S. or green cards) who were accused of corruption at Citgo, but granting them house arrest was a significant gesture. In the spring of 2021, the Venezuelan government launched an offensive against irregular forces along its border with Colombia, another long standing complaint of the U.S.

In short, the three things Abrams believes the Guaidó faction of the opposition can achieve have already been achieved by other parties. This places heavy pressure on Guaidó to sign an agreement and participate in the November 2021 “megaelections”, when the entire country will vote on governors, mayors and municipal councilors. According to Bloomberg, the Guaidó and Capriles factions are set to announce their participation in the days before the negotiations begin. More radical aspirations, like a do-over of presidential or legislative elections, appear to be off the table.

The Biden administration is one of several facilitators of the dialogue in Mexico, but the best it can do is stay out of the way. While no new sanctions have been imposed on Venezuela this year, the White House is dragging its feet on a promised review of sanctions. Plus, there is increased pressure from the international community on this issue. In mid-August a group of UN experts declared that the sanctions on Venezuela impinge on the country’s right to development. They also said they constitute a “punishment of civilians.”

The pressure is also coming from Congress. Seventeen Representatives recently wrote to Secretary of State Antony Blinken, calling on him to “alleviate the suffering of the Venezuelan people by taking immediate steps to lift the broad and indiscriminate sanctions.”

It’s unlikely the White House will lift sanctions before the negotiations are concluded. This heartless policy, which has killed tens of thousands, if not a hundred thousand people, is being used as a bargaining chip.

But sanctions relief is only one step the Biden administration must take. Another is returning Venezuela’s embassy and allowing the reopening of consulates. Even the Taliban pledged to protect foreign embassies, but the Trump administration sent armed agents into Venezuelan diplomatic premises prior to handing the buildings over to its hand-picked, self-proclaimed “interim president.”

President Maduro said he would welcome the U.S. top embassy official back into Caracas. President Biden should do the same. This will help thousands of Venezuelans in the United States who have gone without consular representation since 2019. It will also open a direct line of communication between two countries that have not engaged in dialogue in years. While dialogue within Venezuela is necessary, it should be accompanied by talks between Venezuela and the U.S. to ensure stability and a lasting peace.

Leonardo Flores is a Latin American policy expert and campaigner with CODEPINK. To join CODEPINK’s call for Biden to lift the sanctions, click here.