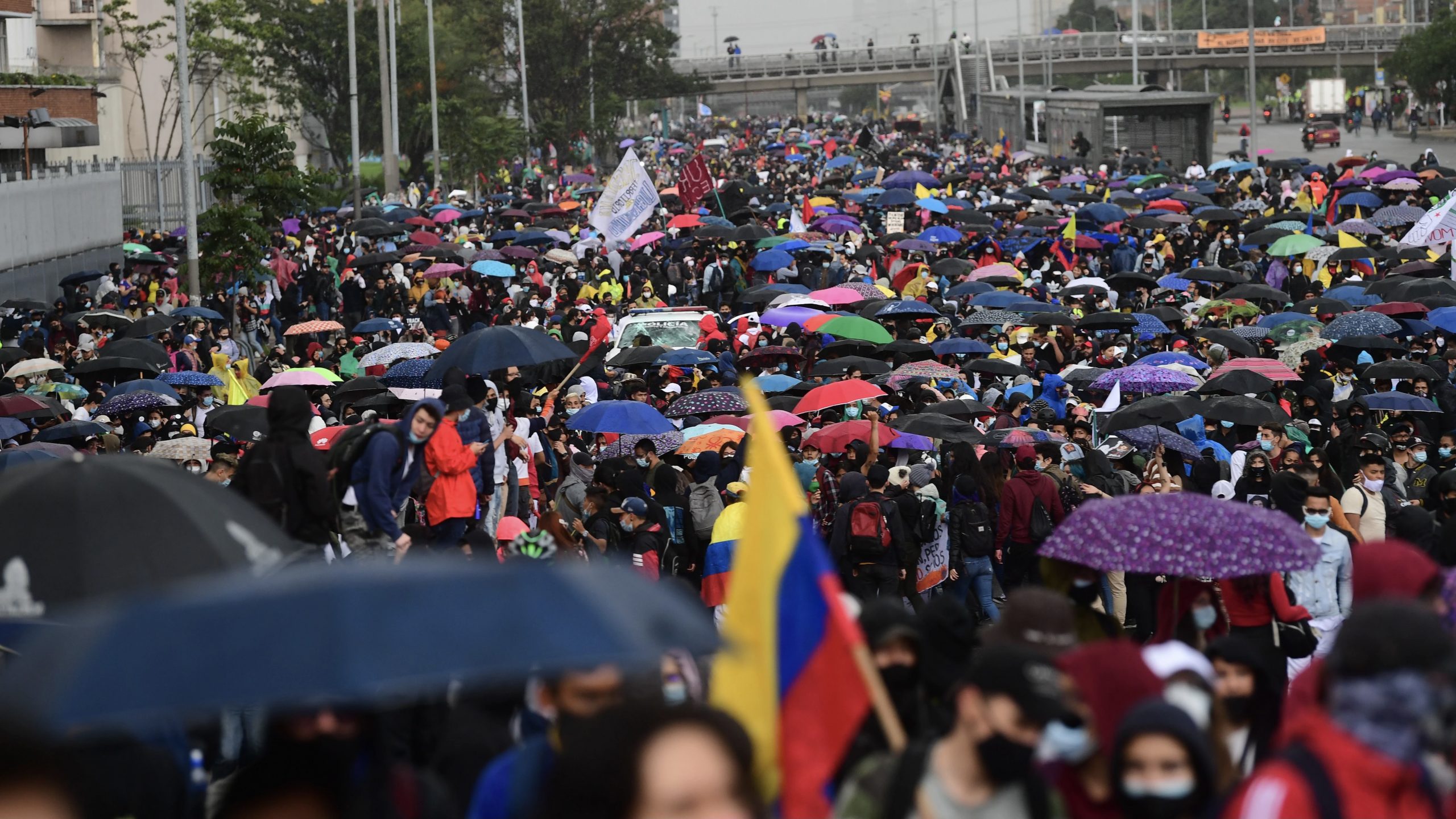 On August 26, thousands of Colombians took to the streets in main cities of the country in rejection of a new tax reform bill promoted by the far-right national government. Photo: Gustavo Torrijos Zuluaga/El Espectador

This Thursday, as a part of a new national strike, thousands of Colombians took to the streets across the country in rejection of a new tax reform bill promoted by the national government and in support of the ten bills presented by different sectors last month

After over two months of national strike and nationwide mobilizations earlier this year, this Thursday, Colombians resumed their struggle against the far-right government of President Iván Duque and the glaring social inequalities in the country. On August 26, as a part of a new national strike, thousands of Colombians took to the streets in the main cities of the country in rejection of a new tax reform bill promoted by the national government and in support of the ten bills presented on July 20 by different social sectors and trade unions.

In the capital Bogotá, workers from different sectors, teachers, students, peasants, health workers, members of Indigenous and Afro-descendant communities, women and LGBTQ movements, and human rights organizations, carried out a massive march from the Enrique Olaya Herrera National Park to the Bolivar Square. Caravans, mobilizations and other protest actions were also organized in the cities of Barranquilla, Bucaramanga, Cali, Ibagué, Manizales, Medellín and Popayán, among others.

The protesters condemned that the new tax reform bill, like the previous one, promotes neoliberal and regressive measures such as tax on basic products, sale of public sector assets, restructuring of state-owned companies, freezing of wages for public sector workers for at least ten years, among others.

They also criticized the delay in discussion of the bills, which respond to the most urgent demands of the citizens such as measures to alleviate the worsening socio-economic conditions, rampant inflation and high levels of unemployment and poverty; protection and security for social leaders, human rights defenders and former FARC combatants; actions against gender-based violence and violence against LGBTQ+ people; financial support to the agricultural sector; strengthening of public education and healthcare sectors, among other demands.

The strike was called for by the National Strike Committee (CNP), which brings together a diverse group of social organizations and trade unions, to demand that the Congress analyze and debate the bills presented by the committee and progressive legislators at the end of the last month. The CNP highlighted that the protests were also called in rejection of the escalation of violence and massacres in the country and the selective assassination of social activists and ex-combatants of the FARC guerilla group.

According to the Institute of Development and Peace Studies (INDEPAZ), so far this year, as of August 27, 112 environmentalists, human rights defenders, community, peasant and social leaders, and 35 former combatants of the FARC, who were in the reincorporation process, had been murdered by illegal armed groups. Additionally, around 234 people had been killed in 67 massacres perpetrated in these eight months.

The CNP also rejected the violent persecution of those who participated in anti-government protests through criminalization and murder by paramilitaries. The organization lamented the recent murder of a 26-year-old student activist, Esteban Mosquera.

Mosquera was pursuing a music course from the University of Cauca. In December 2018, during a students’ demonstration demanding access to free higher education for all, he lost his eye after being shot by an official of the Anti-Disturbance Mobile Squadron (ESMAD). But continued the struggle for social justice and inspired numerous people. On August 23, Mosquera was shot dead in the city of Popayán.

On August 24, in Medellín, on the outskirts of the Pablo Tobon Uribe theater, a peaceful candlelight protest was organized to pay tribute to Mosquera and his spirit of resistance.