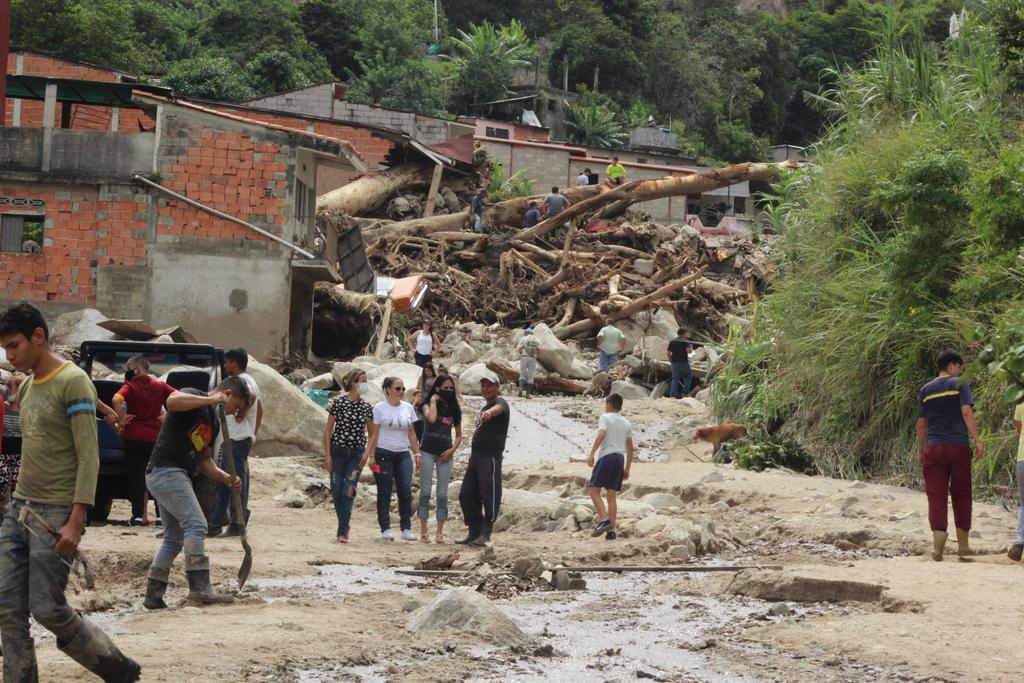 The Venezuelan government deployed personnel specialized in search and rescue operations to all the hardest-hit areas. (Twitter / @JEHYSONGUZMAN)

“This emergency decree greenlights all logistical and financial operations” primarily in the states of Apure, Bolívar, Yaracuy, Zulia and Mérida, the hardest hit by the rainfall that triggered mudslides and flooded communities, said Maduro during a televised address on Wednesday.

According to the last report by the Minister of Internal Relations, Justice and Peace, Admiral Remigio Ceballos, there are 54,543 people and more than 14,000 families affected in 87 municipalities spanning eleven states.

Ceballos detailed that 12,649 officials “specialized in search and rescue” operations from Civil Protection (PC), the fire brigade and the Simón Bolívar Humanitarian Task Force were deployed to the troubled areas. Likewise, the armed forces’ regional commands have been mobilized in the worst-hit areas.

Additionally, authorities have distributed 313 tonnes of food, medicine, water and household goods to assist the population. The western state of Mérida has received 40 tonnes of humanitarian aid.

A previous balance issued on Tuesday by Civil Protection accounted for 8,098 houses, 166 roads and ten bridges damaged around the country. In his broadcast, President Maduro ordered the Housing Ministry to build new homes for the families affected, stating that “no Venezuelan will remain in a shelter indefinitely.”

The Venezuelan president went on to assign funds for the reconstruction of roads, bridges, and power stations compromised by overflown rivers.

The National Institute of Meteorology and Hydrology (INAMEH) explained that the heavy rains are caused by tropical waves 38 and 39 that are sweeping through the west of the Caribbean nation. The public entity warned that the country has 10 more days of forecasted rainfall, adding that the current levels are 65 percent higher than last year’s.

Located in the Andes region, Mérida has been the hardest-hit area in the country, with at least 20 people dead, according to the state’s government-appointed “protector” Jehyson Guzmán, while Vice President Delcy Rodríguez visited the area and reported three people missing. Most of the fatalities occurred in the town of Tovar, where the Mocotíes river overflowed after hours of severe rainfall.

The mountain-surrounded state has also registered the most damage, with 60 houses destroyed, over 800 in need of reparations and 70 kilometers of roads cut following landslides that turned them into raging mud torrents. Around 400 families reportedly lost all their belongings as well.

Footage from the town of Tovar in Mérida, where heavy rains caused mudslides that swept rocks, trees, cars and houses.

Speaking on state television, Guzmán informed that the floods collapsed Tovar’s electrical substation, causing power outages in five municipalities. However, a team from the state electricity company CORPOELEC was immediately on-site to restart the facility. Transformers and power lines impacted by the rain are currently being restored.

Mérida’s “protector” added that telephone lines were successfully reconnected, allowing families from remote areas to communicate with their loved ones and report their situation.

For his part, Mérida’s Governor Ramón Guevara has been on-site and reported 18 dead and four missing. The opposition politician said his office was working in coordination with the protectorate and armed forces to assist the population, leaving differences aside. “The tragedy of our communities should not be politicized,” he wrote on Twitter.

To expedite relief efforts in Mérida, Maduro issued a first emergency decree only for the Andean state on Tuesday. This allowed for the mobilization of much-needed resources and excavators to reach some of the worst-hit areas in ongoing operations.

In the early hours of Thursday, authorities informed via Twitter that rescue teams continue to clear roads in order to deliver humanitarian aid to victims and further assess damages. For his part, Maduro also used social media to assure that the situation was still being closely monitored.

Other states under emergency after the heavy rains are Táchira, Amazonas, Bolívar, Delta Amacuro, Monagas and Aragua. No fatalities have been reported from these areas at the time of writing.

Edited by Ricardo Vaz from Mérida.