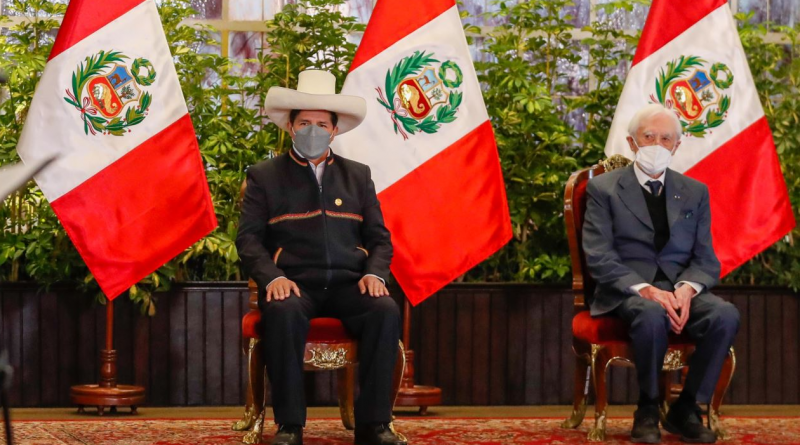 ALBA Movimientos is issuing an alert of a coup underway against the government of Pedro Castillo in Peru and is calling for international solidarity, saying, the removal of Héctor Bejar from the Foreign Ministry, just two weeks into government, “is a clear sign of the coup in progress in its political & military facet and expresses the linkage of right-wing parties with fascist sectors of the human rights violations [of past decades]”.

The statement, dated Sunday, August 22, 2021 can be downloaded in PDF below.

NO TO THE COUP D’ETAT UNDERWAY IN PERU.
ONLY THE PEOPLE MOBILIZED IN THE STREETS, FIELDS AND HIGHWAYS CAN SAVE DEMOCRACY.

In Peru a coup d’état is underway against the government of Professor Pedro Castillo. From ALBA Movimientos and from every corner of the Patria Grande we denounce the Peruvian right wing and its insistence on ignoring the popular majorities of this brother country. The first steps began on the very day of the electoral victory, but now they have been accentuated since they succeeded in removing Héctor Béjar from the Foreign Ministry, in what we consider could be the initial kick-off of a coup counter-offensive, which is sell-out and ultra-reactionary.

The coup strategy has at its center the Congress, dominated by the right wing, which has presented the Guinness record of 19 motions to question seven Ministers in only 15 days of government and threatens in the coming days with the unprecedented and unusual act of not granting confidence to the recently appointed ministerial cabinet, for the sole reason that it does not like the ministers. At the same time, these reactionary sectors are trying to overthrow the recently assumed popular government, using the figure of “presidential vacancy due to moral incapacity”, a diffuse and discredited figure, part of the worn out institutionality and in crisis. But in addition, this right-wing coup seeks to appoint new members of the Constitutional Court to act as a padlock to prevent the Constituent Assembly and other necessary changes that were voted in the ballot box as a program and commitment of President Pedro Castillo.

As if the Congress were not enough, this right wing, wrongly called opposition, counts on the media monopolies as part of its armament, which show the same partiality, aggressiveness and racism against the government as they showed against the popular candidate during the electoral contest. In addition, the economic and financial powers that be speculate with the price of the dollar and food, punishing the population with the purpose of generating anxiety and feeding the atmosphere of a coup against the government. And now they have the express complicity of sectors of the Navy commanders, who have committed the unconstitutional, flagrant and public crime of deliberation, questioning the former Chancellor, Héctor Béjar, based on his statements about historical facts, which are incontestably true, made before occupying such position and manipulated, decontextualized and distorted by the biased media of disinformation.

At the same time, they count on the judicial and juridical scaffolding in favor of the dominant and imperialist interests to selectively execute strategies of judicialization of politics, lawfare, against anyone who represents a threat to the infinite appetite for accumulation of the mediocre Peruvian oligarchy.

The request for the resignation of the Chancellor, of unsurpassable qualities and capacities, barely two weeks into the government, is a clear sign of the coup d’état in progress in its political and military facet and expresses the linkage of the right-wing parties with fascist and denialist sectors of the Human Rights violations that took place in Peru in past decades. A perfect representative of these dark forces is the former Navy vice admiral and current congressman, Jorge Montoya, today an active coup leader who, in 1999, signed the unseemly “Act of subjection” to former dictator Alberto Fujimori and his sinister advisor, Vladimiro Montesinos, both currently imprisoned for crimes and theft from the country.

We understand that the coup d’état underway seeks to prevent, as a short-term objective, regulations and controls on corruption and privileges, such as the payment of millionaire debts for unpaid taxes to the country, which the government has managed to collect from large mining companies for the first time in decades. At the strategic level, what they are trying to do is to put Peru’s foreign policy back on the renunciation of sovereignty, under the dictates of U.S. imperialism, for the interference and aggression against brotherly peoples of Our America. Finally, to prevent the exercise of the inalienable right of the Peruvian people of their constituent power to decide what country they want to build.

We know very well that the coup in Peru is not only against a government, it is against democracy and the people; it is against the sovereign integration of Our America and against the hopes of the voiceless. We know, from the unfortunate experiences suffered in other countries, that these sectors have no qualms in using the most brutal repression and violation of human rights to maintain their privileges and continue to obey, as they like so much, under the boot of the empire. This is undoubtedly shown by the violent fascist and racist expressions and behaviors that today accompany the coup actions. The peoples of Our America are only nauseated by those politicians, journalists and military who are indignant with historical truths but submissively remain silent in the face of the sale of their country, in the face of the hunger of their people, in the face of more than 200 thousand deaths due to lack of quality public health. History will vomit them out.

Those who feel unpunished to move forward with this coup aberration should know that the people do not forget and do not forgive, justice will come to them.

Only the organization and active mobilization of the people, the political social organizations and all sectors of the Peruvian people, in the streets, fields and highways, can stop the coup d’état in progress against the legitimate government of Peru and save democracy. Also active international solidarity, especially from Our America. The situation is extraordinarily serious and dangerous and no effort to defend democracy is superfluous.

That is why from ALBA Movements we call to be on active alert.

We will not tolerate one more coup in the continent. The time to stop it is now.