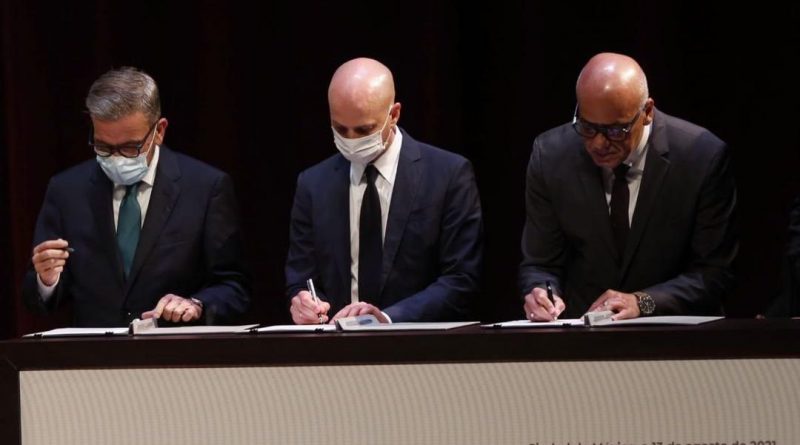 A Memorandum of Understanding was signed by attorney Gerardo Blyde, head of the opposition negotiation team, Norway’s Dag Nylander, head of the Facilitation Team, and Jorge Rodriguez on behalf of the Bolivarian Government of Venezuela.

The Bolivarian government of Venezuela and representatives of the US-backed opposition have officially begun a new dialogue process in Mexico, with the signing of a Memorandum of Understanding.

The negotiation and dialogue process was inaugurated on Friday evening at Mexico City’s National Museum of Anthropology, as the two Venezuelan negotiating parties signed the Memorandum.

Heading the delegation representing the Bolivarian Government of Venezuela, is Jorge Rodriguez, President of the National Assembly of Venezuela, who also led the government delegation in the 2018 Dominican Republic dialogue on behalf of President Nicolas Maduro.

Attorney Gerardo Blyde is heading the Venezuelan oppositions’ Plataforma Unitaria de Venezuela and Dag Nylander, head of the Facilitation Team of the Kingdom of Norway, signed the agreement on behalf of Norway.

Mexican Foreign Minister Marcelo Ebrard inaugurated the process, highlighting the importance of dialogue as the only way to achieve understandings, non-intervention and peaceful conflict resolution.

Rodriguez stressed the need for urgency in the upcoming process: “I propose, in a concrete manner, that we reach agreements quickly and urgently, to protect social issues and the economy for the Venezuelan people, we are ready to come out of this with early agreements that we can take to the Venezuelan people more hope about the development of these discussions.”

President Maduro has previously outlined his minimum conditions for dialogue, including the lifting of all sanctions on Venezuela.

According to the agreement signed, the negotiation teams are made up of nine members and in addition to the facilitation of Norway, the Netherlands and Russia will accompany the talks.

The agreed upon agenda points are:

1) Political rights for all

2) Electoral guarantees for all. An electoral schedule for observable elections

3) Lifting of sanctions and restoration of right to assets

4) Respect for the constitutional state of law

5) Political and social coexistence. Renunciation of violence and reparation to the victims

7) Guarantees of implementation, monitoring and verification of the agreements.

Venezuela will be holding regional elections on November 21st and small opposition parties have announced their participation.