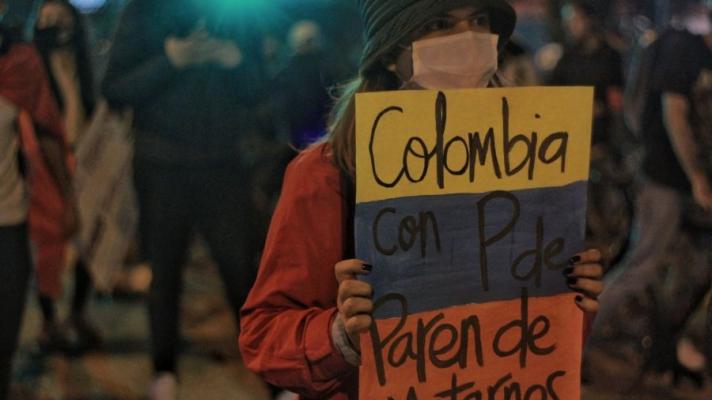 The systematic murder of Colombian youth by the Colombian State is gaining momentum (Photo: Colombia Informa).

At the beginning of the 1990s as the victor of the “cold war”, which in reality had very hot expressions, the United States, having established itself since the second post-war period as the head of the capitalist empire, also consolidated itself as the greatest political and military power, and became the axis of the unipolar world. That had been the objective of the struggle against communism, which justified all wars in a supposed defense of peace that, it was said, only capitalism could sustain.

That was at least the idea that was sold to world public opinion, to convince people that the triumph of the Western bloc of powers would guarantee stability and world peace for the planet. This argument was spread through cartoons, films, speeches and even songs, with which the thriving American cultural industry bombarded the generations that grew up between the 1950s and the 1990s. But the result was that the world continued to be filled with undeclared wars, and it became increasingly difficult to know when an armed conflict was internal and when it was international.

It was necessary to understand who the peace and stability would be for, and what price we, the people, would have to pay. We soon discovered that the “peace” they defended implied more accumulation of wealth for their pockets and more overexploitation for us.

Their peace became the privilege of the countries of the North, while in the countries of the South, in the best of cases, it became the privilege of the big cities. In exchange, we, the peoples, had to submit in silence to the most predatory plundering, the most brutal exploitation and, of course, forget such subversive concepts as independence, sovereignty and social justice.

In this context, the United States, NATO and Israel imposed their increasingly diffuse war models on the world, which generated the flourishing of private military and security companies, as well as paramilitary groups at their service.

The “war on drugs” ended up rearranging the business in their favor to strengthen their economy and finance paramilitary groups, then the “war on terrorism” was declared to legitimize its expansion and all this ended up in the “endless war” as an imperialist strategy, which configured a multidimensional or hybridized war that granted an even more prominent role to the cultural industry and its media corporations.

Venezuela and Colombia are clear examples of this new modality of war, although in different ways. Venezuela is a target of war because it represents a State that after decades of subjugation is insubordinate, taking away political, economic and military power from the North American power in the region, constituting a bad political example and, therefore, catalogued as an unusual and extraordinary threat to the United States.

Legitimization of a genocidal model of social control in Colombia

Colombia, for its part, is the stage and point of export for this war. Subjected to the most brutal dispossession, military occupation and the absolute surrender of its sovereignty, it has become the main imperialist enclave in the region and the exporter of a genocidal model of social control.

In Colombia, genocide, massacres, forced displacement, torture, disappearance and judicialization or lawfare as a State practice against the people in general and against the national and international opposition, have been instituted. This institutionalization, so well achieved, has required the support of the cartelized media corporations that respond to the same economic interests of the political class that has managed to govern the country for two hundred years, subordinating national interests to those of the United States, as the head of imperialism.

The mafias that manage the media cartels in Colombia have been fundamental to render invisible the social and armed conflict that the country is experiencing, presenting it as a fight between criminal gangs that are enemies of the State, and naturalizing the genocide that continues to be carried out. Dissident voices that accidentally emerge in the media are marginalized, and often face all those forms of institutionalized violence we have mentioned.

However, the paradox of the saturation of information generated by the massification of social networks is that they can be tools at the service of psychological operations for commercial and even military purposes, or they can be popular tools to open gaps through which the truth can break through. Goebbels’ dream or nightmare, depending on how they are used. Despite the algorithms that make evident the power of big capital in the networks.

The appropriation capabilities of these relatively new mass communication tools developed by alternative media and even by individuals defending popular interests, have made it possible to establish fundamental trenches of counter-hegemonic communication within them.

Unfortunately, the correlation of forces in this area continues to be on the other side. While imperialism and its governments only need a few hours of protests in Cuba to make a big media scandal, it takes massacres in broad daylight in the big cities carried out by the police, spread by social networks, people who risk their lives to cover and analyze such news, and the titanic effort of alternative media, for the world to know what is happening in Colombia.

The social outburst generated by the National Strike called on April 28th managed to reverse at least temporarily that correlation nationally and internationally, to such an extent that the world’s major media corporations were forced to make visible what was happening in the streets of the main cities of Colombia. Although their media coverage was partial, trying to minimize the seriousness of the events, delegitimize the protest and justify the violent repression, this popular communication exercise was so strong that some national corporate media were also forced to open spaces to denounce the massive violations of human rights and to report the popular demands in order not to lose the large audience they still reach.

But in spite of this, the much-vaunted “journalistic ethics” is today an eccentricity among those who occupy the great podiums of world journalism. During the days of popular struggle in recent months in Colombia, the loss of these ethics has been more than evident to public opinion and this has contributed to unmasking the links of Colombian media corporations with those who have mercilessly violated the people.

In Colombia, the Mobile Anti-Riot Squad (Esmad) – the police that is massacring protesters – is the US model of counterinsurgency applied to the civilian population.

The most painful thing about this new genocide that has been committed mostly in Cali, but also in Bogota and other cities in the country, is that the main target has been the brave Colombian youth.

The systematic and planned murder of young people that is being committed in Latin America has been called “juvenicide” by Mexican researcher José Manuel Valenzuela Arce, and based on that category, Professor Renán Vega Cantor denounces that in Colombia a class juvenicide is being carried out.

Time, which always plays in favor of whoever is in power, has undoubtedly generated attrition that is manifested in a decrease of the intensity of the protest in the streets that, however, at very high costs, obtained great achievements that have placed Colombia on the verge of an organic crisis and, undoubtedly, have sown an accumulated history that the institutional political opposition can harvest in the next elections to Congress and Presidency in the year 2022.

But the most important thing of all is that it will be gathered by the young men and women of the popular sectors who continue to raise their voices, in processes as interesting as the Popular Assemblies that have been taking place in the last month throughout the country, in which the First Lines have participated as an emerging political actor that is an expression of this dissident generation without forming an organization per se, but with the unquestionable legitimacy that provides them with the local roots and the diversity that this implies.

Without dissimulation, while the media controlled by the mafias that dominate the country victimize the mercenaries who assassinated the president of Haiti and minimize the reports that Colombia has become the main supplier of mercenaries qualified by the United States and Israel to assassinate presidents. Criminalizing social protest is an editorial line that is becoming more and more widespread, with which, for example, the youth who have spontaneously formed the First Line in their communities, especially since April 28 of this year, are presented as a single group that is labeled as terrorist and even criminal, thus legitimizing the juvenicide that the criminal State is executing.

This juvenicide, which contravenes the most basic instincts of conservation of a species, is added to a series of State crimes. Ethnocide, massacres, political assassinations, torture, disappearances and forced displacements, and memoricide, in which those mafia-like media corporations that misinform the country play a decisive role.

Colombia has become a worthy object of study to understand capitalism at its climax in the countries of the South. An efficient synergy between government, military and paramilitary forces, drug trafficking, cultural industry and press, at the service of corporations and the hegemonic great power. This scenario also renders it a launching pad for imperialism in the region and an export model, as well as the theater of operations of a multidimensional war of the State against its own people.

Two hundred years of power of the same families that only look after their own interests and subordinate the national interests to the designs of the United States, refurbished with the emerging cadres of the new rich families born from drug trafficking and their lucrative laundering of assets, have consolidated a dictatorship where the traditional oligarchy and the emerging mafias intermingled shamelessly and it is no longer possible to differentiate them. Two hundred years are enough, and that model has grown old.

The model of supposed Colombian democracy that assumed that a revolution could be prevented by shooting, is today a genocidal and “gerontocratic” dictatorship that has demonstrated by force of blood that, while fear of the people is constant, today it is specifically the fear of the strength of the young people that causes them to tremble because they assumed the weight of the protest, transcending by far the initial call, because history has placed this generation before a desolate panorama in which risking their lives is their only alternative.

The Colombian Minister of Defense himself, Diego Molano, just a few hours ago publicly threatened the youth of the First Line, warning that “not a single one will be left at liberty”, while the intelligence agencies and their paramilitary groups continue to detain, prosecute, kidnap, disappear and murder young people from all over the country.

To abandon the Colombian youth in their trenches would be a crime that the youth of the world and particularly of the region would regret sooner rather than later, but above all the previous generations who were unable to do what this one is doing at the cost of their lives.

The countless images of cruel murders of young people that have traveled the world in these last months of National Strike are the most recent proof that the Colombian State murders and criminalizes the youth systematically and deliberately, because to perpetuate itself in power it needs to keep the country immersed in an endless war, even if that means massacring a generation.

At the same time, the peoples of the region should be on alert, because this class-based juvenicide that is being committed in Colombia will soon become even more internationalized if, through ignorance, selfishness or apathy, this generation will be left to fight alone and this brutal crime will be normalized.