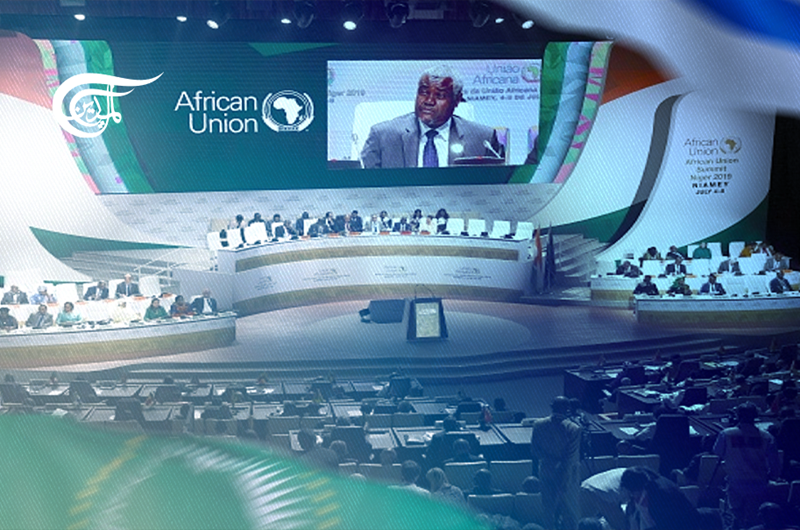 African member states and organizations in solidarity with Palestine denounce the inappropriateness of the measure and call for its revocation.

On July 22, the chairman of the African Union Commission, the Chadian Moussa Faki Mahamat, announced that he had received the credentials of Aleli Admasu, “Israel’s” ambassador to Ethiopia, Burundi and Chad, which means that “Israel” has been granted observer status in the African Union, a status it had lost in 2002 when the Organization of African Unity (OAU) was transformed into the African Union.

This move has sparked outrage among human rights and Palestinian solidarity organizations around the world, and especially on the African continent. Almost immediately, several countries issued statements rejecting the measure, including South Africa and Algeria, among others, denouncing that it was taken unilaterally and without the required consultation with member states.

In its communiqué, the South African government declared itself “appalled by the unjust and unwarranted decision” of the chairperson of the African Commission and recalled that the compulsory protocol for this type of decision, according to AU legislation, requires prior consultation with member states, something that had not been followed.

Algeria, for its part, issued a statement denouncing the same inappropriateness of the decision: “taken without the benefit of extensive prior consultations with all member states” and recalls that this measure “should not alter the constant and active support of the continental organization to the just Palestinian cause”.

With “Israel’s” entry, the AU has 87 non-African states with observer status. The Algerian authorities recall that the AU does not allow these states to “influence the positions of the continental organization, whose determination is the exclusive competence of its member states”.

Algeria has also been very critical of Morocco’s rapprochement with the Israeli state, which has just normalized diplomatic relations, in the face of numerous protests in the streets of the Alaouite kingdom, whose population is overwhelmingly on the side of the Palestinian people.

The African Palestine Solidarity Network is mobilizing support from African organizations “to call upon AU member states to reject Israel’s claim to accreditation so that the matter can be placed on the agenda of the next session of the AU Executive Council”, which will be held in mid-October this year, warning that the “undemocratic move risks undermining the stability and credibility of the AU”, adding that it also sets a dangerous precedent of a unilateral decision by a Commission chairperson, not only without prior consultation, but “against the known views and concerns of member states”.

The network argues that “the accreditation of Israel as an observer state runs counter to the long-standing principled position of solidarity with the Palestinian people expressed by the African Union, its predecessor the Organization of African Unity (OAU), African states and the African people”.

The communiqué issued by the Africa Palestine Solidarity Network recalls that “With its systematic violations of international law, Israel is a constant and direct threat to peace and security in the Middle East and North Africa, including AU member states, and globally, Israel is an exemplary case of continuous and systematic violation of basic human rights, as well as of many international human rights instruments, including the International Court of Justice and countless UN resolutions.”

“Israel has acted with impunity during its decades of violations of human rights and international law. The AU should not reward a human rights violator, aggressor and colonizing power. Instead, the AU should support the Palestinian people’s call for boycotts, divestment and sanctions to isolate Israeli apartheid.”