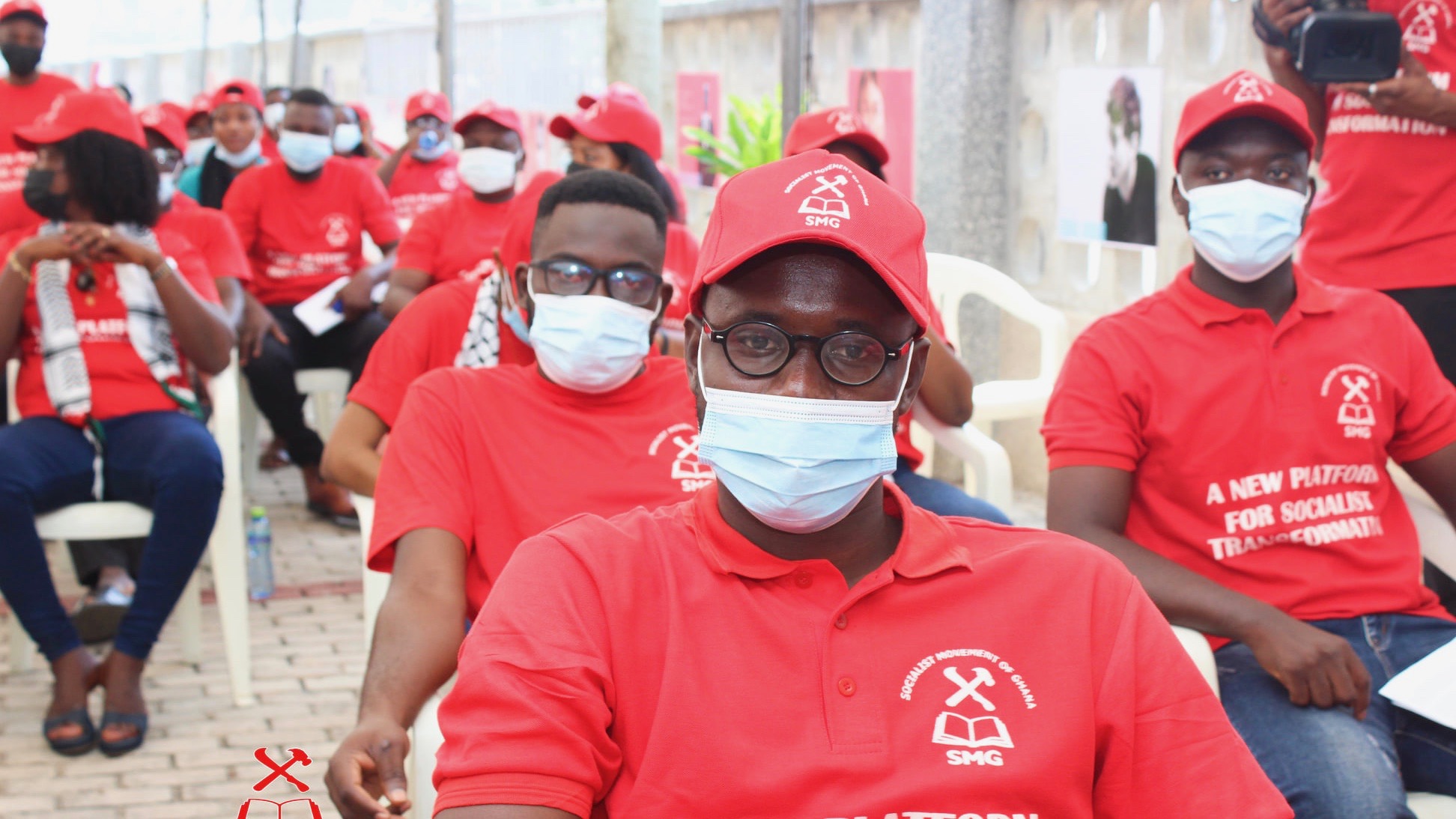 The First National Congress of the Socialist Movement of Ghana (SMG) – previously the Socialist Forum of Ghana (SFG) – was held from July 30 to August 1 in Winneba, a town in the country’s Central Region.

Within the framework provided by the constitution, “our militants can build organization and networks required [to advance the].. struggle for the return of power to the people,” states the final resolution adopted by the Congress.

The SFG was founded in 1993 by only four members during dictatorial rule. Its mission was to advance in public discourse the cause of socialism and pan-Africanism, as well as the legacy of Kwame Nkrumah – Ghana’s first prime minister, whose socialist project was cut short less than a decade after independence by a CIA-backed military coup.

Over the decades – through its media organizations, study groups, cultural spaces and bookshops – the SFG expanded its activities. The organization’s size increased, especially over the last three years, when youngsters flocked to the organization in large numbers, increasing its membership to around 3,000.

“A crash is almost inevitable”

This expansion in the organization’s membership has come at a time when public discontent about unemployment and rising costs has come to a head.The World Bank had reported in September 2020 that 12% of Ghana’s youth are unemployed and over 50% are underemployed, both of which are “higher than overall unemployment rates in Sub-Saharan African countries.”

The crisis of unemployment has been further accentuated by the sale of farmlands to corporations. This displacement of subsistence farmers has led to large-scale migration of youth from rural areas to the cities, adding to the already high unemployment rates. “Public safety is declining with increased petty and organized crime in both city and countryside. Confidence in the integrity or capacity of state agencies is at rock bottom,” the Congress noted.

After a spree of privatization of publicly owned enterprises and resources, “food, shelter, petroleum, gold, cocoa and timber and related infrastructure, trade facilitation, finance, and technical services industries” have all for the most part been taken over by foreign corporations.

“The State, having run out of assets to sell, cannot repay its debts, and is compelled to resort to regressive taxes, and.. higher-cost borrowing to service debts. A crash is almost inevitable,” the Congress’ resolution said.

None of the national political parties – neither the ruling Patriotic Front nor those in the opposition – have a vision to overcome this structural crisis, and remain committed to the neoliberal path. “National political campaigns consist mostly of unwholesome personality attacks, degrading propaganda, identity struggles, and intensifying violence – trends set to escalate and destabilize the country further,” the resolution adds.

Under the circumstances, “socialist struggle requires an advanced political organization – in size, breadth, networks, mobilizing power, and strategic and tactical capacity – beyond what SFG could provide.”  Thus the need to reorganize the Forum into a Movement arose, which is “a larger, more diverse and more pro-activist organization,” Kwesi Pratt Jr., SFG’s general secretary, had said earlier last month.

He was re-elected at the conference to head the SMG in the same capacity. Kyeretwie Opoku and Kofi Henaku were elected as the Convenor and the International Affairs Secretary, respectively.

Under their leadership, the SMG will work “with socialist and progressive political and social organizations in Ghana and defeat Imperialist efforts.” Defining imperialism as “the globalized phase of capitalism”, the resolution noted that “[f]or four centuries, Imperialism has directly attacked African society. It has weaponized every possible identity – race, ethnicity, religion, gender, sexuality, and age as part of a divide-and-rule strategy.”

“Imperialism is the cause of instability in West Africa”

This divide-and-rule strategy has made African states highly “vulnerable to pressure from ‘non-state’ actors like hijackers, kidnappers, and drug cartels; and ensured that civil and social contests in Africa’s neo-colonies easily degenerate into intractable violence.”

This is typical of countries especially in West Africa, whose natural resources have been ‘balkanized’ and taken over by foreign companies which also control the bulk of infrastructure, trade and service industries. The social crisis arising from the consequent mass deprivation and the disastrous military interventions led by imperialist forces has provided a fertile ground for violent transnational organizations operating with various motives.

Summarizing the extent of destabilization caused by this and the dangers looming over West Africa, a passage in the resolution noted:

“Pirates and narcotics cartels threaten Atlantic oil and gas and shipping operations just as brigands and kidnapping rings threaten the Sahara-Sahel area. Sahara-Sahel is on fire.  French colonialism.. had already.. rendered their people poor and desperate. NATO’s 2011 destruction of the Libyan state galvanized and radicalized Islamic youth across Mauritania, Niger, Mali, Chad, Burkina Faso, and Northern Nigeria. Some of these angry youths have allied with tribal and “criminal” organizations to challenge corrupt and unpopular neo-colonial establishments. Others have been absorbed into larger Islamist organizations like AQIM that seek to establish a Regional Caliphate.”

This crisis, caused by imperialism, has been used as a justification by the very same forces for further “military interventions designed to seize direct control of the Sahel-Saharan natural resources, thereby heightening tensions and spreading waves of instability across the entire Region.”

Imperialism, however, is the “cause” of instability in West Africa, and not a “cure” for it, the SMG maintains, declaring that “there are no fundamental contradictions amongst the ordinary people of West Africa. Growing conflict reflects the West’s longstanding agenda to break indigenous resistance to neo-colonial exploitation,” states the resolution.

Outside West Africa, the Congress recognized the struggle of the Socialist Party of Zambia – which is set for its first electoral contest this month – against the “neo-colonial” rule of president Edgar Lungu in the southern African country. The Congress also declared solidarity with the Sahrawi People’s Democratic Republic in north Africa.

“Western Sahara”, the resolution stated, “remains the only colony on the African continent. It has been forcibly colonized by Morocco, a fellow African country which itself has experienced the humiliation of direct foreign domination but now works as an agent of US and Israeli penetration of the region.”

The SMG has called on the government of Ghana, the African Union (AU), the Economic Community of West African States (ECOWAS) and the UN to “compel Morocco to recognize Sahrawi right to self-determination and to respect the decisions of the International Court in this regard and calls for withdrawal of Moroccan occupation forces from SADR.”

Declaring solidarity with the people of Palestine who are fighting the illegal Israeli occupation, the resolution adds, “We deplore the support that the US and other capitalist states continue to provide to Israel’s crimes against humanity.  We call on all African states to reaffirm Israel’s Apartheid status and to reject completely any notion of Israeli participation in the work of the AU in any capacity including observer status..”

The SMG also declared solidarity with the “People, Government, and Communist Party of Cuba, whose own internationalist example remains unparalleled in world history.” The organization demanded that the government of Ghana should “join in the condemnation of US aggression and to take practical steps to alleviate the suffering of the Cuban people by challenging the illegal US blockade of Cuba.”

Also noting that “Venezuela faces sustained US aggression designed to acquire control [of]  Venezuela’s vast energy resources and to stop her support to progressive causes around the world,” the SMG expressed solidarity with the Venezuelans struggling under the US-imposed blockade.

Saluting the Communist Party of China on its first centenary, the SMG confidently described the renewed US aggression against the country as “a futile effort to roll back China’s unprecedented development achievements of the last 40 years and distract global attention from recognizing the obvious superiority of socialist planned development over neoliberal capitalism. Congress directs the Central Committee to study China’s transformation and especially its eradication of extreme poverty to understand how much of China’s strategy and organization may serve as an example.”