We could write a hagiography of Commander Hugo Chávez or perhaps an anecdote of the battles he fought and won throughout the years, tasks that come to mind on a date so celebrated by millions of Venezuelans as is the birthday of the historic leader of the Bolivarian Revolution.

But we decided to trace those childhood years that were so important for his formation and later in recent history, to reproduce them in this tribune as a tribute not only to him, but also to the origins that forged his character and, therefore, the nature of Chavismo.

The fragments republished here are part of the book Chávez nuestro, by Cubans Rosa Miriam Elizalde and Luis Báez, who interviewed relatives, friends and comrades of the Comandante to provide an intimate, perspective, but which surpasses it, of his character and all that he represents for Venezuela.

The testimonies presented are those of Flor Figueredo, Joaquina Farías and María Gil de Chávez, first, and of Hugo Chávez, later, connected by the cultural fact that represents the origins never betrayed by the “arañero” of Sabaneta.

The Figueredo family were friends of the Chávez Frías before the marriage of Elena and Hugo de los Reyes. Rosa Figueredo has said so while sitting on her stool. She does not listen well to the journalists – “hard of hearing”, she assures-, but she manages to grasp that the conversation revolves around Chávez Frías: “Yes, Rosa Inés was my friend, and I also knew her mother, Rosa Chávez”, and a long parenthesis of silence opens while images from at least half a century ago take shape in her mind.

Flor Figueredo, Rosa’s daughter and Hugo’s contemporary, remembers perfectly that he always carried in his backpack, protected inside a candy jar, the “arañas de lechosa” prepared by the Chavez’s grandmother. Flor tells us:

Rosa Inés would tell the child: “Look, Huguito, if you sell eight spiders, you have to bring eight lochas. Remember that one bolivar has one real, one half and two lochas”. He would bring the candy to school and sell it at the end of classes. One day two little girls, daughters of Don Julian Colmenares, a man who had a workshop, ate Hugo’s spiders.

I can almost see him: he was about ten years old, and he was crying in that street, thinking about what his grandmother was going to say to him. What hurt him most was the grief she was going to cause him. She was good and sweet, with a character like Adam. When she saw him arrive, Rosa Ines said to him: “But, son, where were you when those spiders ate you?

Sometimes those memories come to me, and it seems as if one has him in front of me. Like when I used to see him coming from Madre Vieja, where the Boconó river used to run. With him came Felix, Andres Sequera, Laureano, Pancho Bastidas, Cigarrón, Leoncio… loaded with cane sticks to build the parrots…. Hugo was the leader of them all. He had a strong character and was tireless. He would play baseball in the street. They called him “el Zurdito de Oro” and “el Látigo Zurdo”, alluding to “Látigo Chávez”, who was the idol of all of them.

One who saw him so small, says to herself: who would have imagined! Look, how far Huguito has come! That boy that you saw born, who was poor like all of us, who had nothing, and now he is defending us. It was so that in this town, where I have seen the poorest of the poor, there would be neither Adecos nor Copeyanos, but pure Chavistas.

Sometimes they called Hugo by a nickname, “El Coco”, because he had short hair and a light head, yellow like a coconut. Doña Elena’s sister, Joaquina Frías, smiles at the memory:

Rosa Inés, may God rest her soul, kept some strands of hair from when Adán and Hugo were children. It was easy to know who they belonged to. Hugo’s locks were yellowish. Just yellow hair, but curly, like a good bachaco.

On one occasion, Joaquina saw Rosa broken down in tears…

It was the first day Hugo went to school. They didn’t let him in. He was wearing some old espadrilles, the only ones he had. His grandmother cried and cried because she didn’t have enough money to buy him shoes. It was painful to see that woman, so strong with life, suffer in that way. I don’t know how she managed to buy another pair of espadrilles so the boy could go back to school. His parents earned about 300 bolivars a month. Very little. With that they had to feed their four children and help Rosa.

Rosa Inés was a descendant of the Indians of the plains. María Gil de Chávez, widow of José Anastasio Chávez, knew her very well.

Her father was a black plains Indian, who is buried in the savannah of Guanarito. Rosa was a very respected and good looking Indian. After her husband died she never remarried. Since I met her, her life was her grandchildren.

The children would go to Maria’s house, in Santa Rita, very close to Sabaneta, and she would prepare the best she had for them.

How that boy loved the fish hallaca, the roasted meat, the merengada de cambur and the dulce de lechosa! I still make that sweet for him, and I take it to wherever he is, every time he passes through this area.

María smiles because she remembers him tasting his coconut preserves in all their variations: the requemada, the aturronada or brick, the melcochosa; and the peach, tamarind and pumpkin candies. Not long ago she made Hugo a dulce de lechosa, his favorite.

I took it to him when he was here inaugurating La Tomatera, and I shouted: “Huguito!”, and he answered me: “There’s grandma!”. And I shouted even louder: “I brought you your candy, my love”. The people made way for me, and I gave it to him.

When he was in jail, I made many promises and prayed every night to the Virgin of Coromoto petitioning her for him. When he got out of Yare he came here, to my house. Before I used to cook for him more often, but now it hurts me not to make him his sweets. I suffer from a heart condition and that is why I have not been able to take them to Caracas. But I told him the other day: “Don’t worry, mi’jo. Every time he comes to Sabaneta or Barinas, I’ll go and bring him his candy”.

Why do I love him so much? Ah, he gives a lot of love and he doesn’t neglect the poor. That is something we do not forget. He always, always hugs me, like when he was a little boy, and he even puts his hands together to ask for my blessing.

My eyes tear up when I read what you have written about Sabaneta. For example, what Flor Figueredo told you.

Maria told us that every time you pass by there, she looks for you to bring you a sweet.

Ah, María Chávez, there in Santa Rita. Did you go to Santa Rita?

We even went by bicycle. Maria has a heart condition.

She told us that she has something wrong with her heart and that is why she can no longer bring sweets to Miraflores.

She takes the candy to me wherever I go and gets in between the soldiers: “Let me pass, I am the great-aunt”.

And Joaquina Frías remembered that her grandmother Rosa Inés cried inconsolably because you didn’t have shoes to go to school. 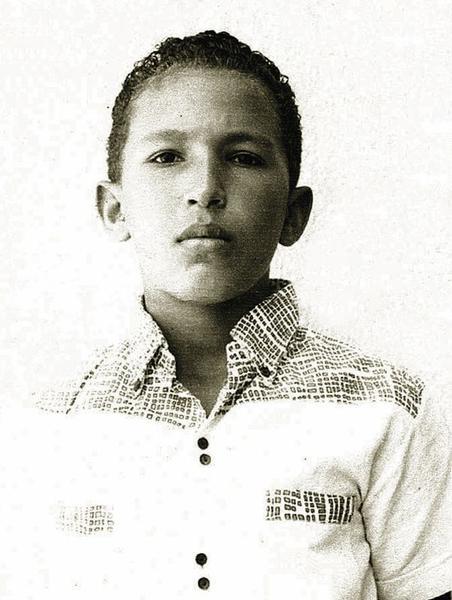 What a beautiful feeling I received when I read what Flor Figueredo said. She was very beautiful. She was the girlfriend of a Spaniard, a Canary Islander, and I was jealous of her. Flor would hang out at our house, because she was a friend of my mother’s. I remember one day she touched me. I remember that one day I had to give a speech in honor of the first bishop that was appointed in Barinas, Monsignor Rafael Angel Gonzalez Ramirez. The bishop visited Sabaneta. I was in sixth grade and I was designated to say a few words through a microphone. Flor Figueredo, so beautiful, gave me a kiss. I felt on cloud nine. I can’t forget her saying to me: “Huguito is going to like giving speeches, look how well he does it”. 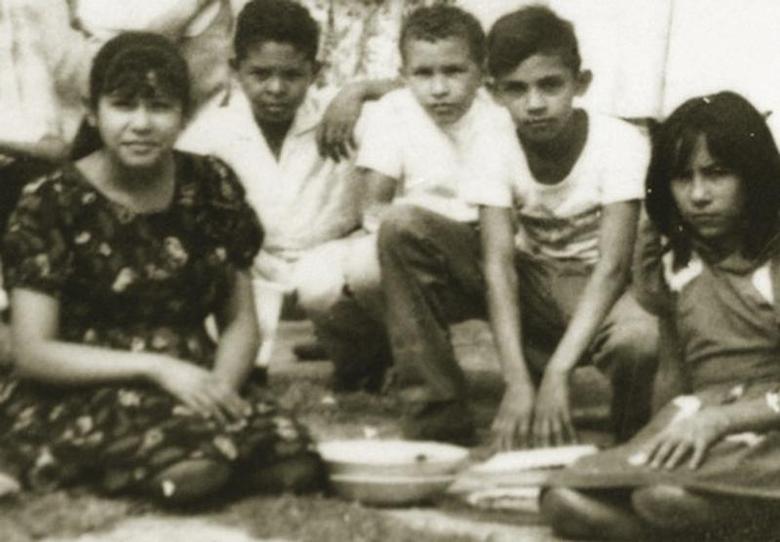 I will not betray my origins

I will not betray my childhood as a poor boy from Sabaneta. Immediately after we buried grandmother Rosa Inés, in January 1982, I went to Adán’s house and there, at night, next to a small lamp he had in his little studio, I wrote a poem dedicated to her.

It came out in one go. It was a kind of oath before Rosa Inés, a memory that is sacred to me:

Maybe someday,
my dear old woman,
I will direct my steps
towards your enclosure.

And then,
through the Old Mother
the waters of the Boconó
of the Boconó River
as in other times
watered your fields,
and along its banks
you will hear the joyful song
of your christophué
and the soft chirping
of your tiles
and the clear laughter
of your old parrot.

And then,
in your old house
your white doves
will take flight.
And under the matapalo
Guardian will bark,
and the almond tree will grow
by the orange grove.

And the plum tree
by the topochal
and the mandarin trees
next to your pine tree
and will redden
and the semeruke
by your rose bush
and the straw will grow
under your cornfield.

And then,
the joyful smile
of your absent face
will fill with lights
this hot plain
and a great mount
will suddenly come out.
And the Federals will come
with Zamora at the front
and the catire Paez
with his thousand brave men,
the guerrillas of Maisanta
with all his people.

Or maybe never, my old lady,
so much happiness
for this place.
And then,
only then,
at the end of my life,
I would come looking for you,
my Mama Rosa,
I would come to the grave
and I would water it
with sweat and blood
and I would find comfort
in your motherly love
and tell you
of my disappointments
among mortals.

Then,
you would open your arms
and embrace me
like an infant’s time
and lull me to sleep
with your tender song
and take me
through other places
to launch a cry
that will never be extinguished.

Those verses have been and will continue to be my commitment to her and to myself. At Rosa Inés’ side I knew humility, poverty, pain, sometimes not having enough to eat; I learned about the injustices of this world. I learned with her to work and to harvest. I learned solidarity: “Huguito, go and take this hallaca, this little bit of candy to Doña Rosa Figueredo”. It was my turn to go, in her name, handing out small gifts to friends who had nothing, or almost nothing, like us. And I would always come back with other little things sent from there: “Take this to Doña Rosa”. And it was a candy or some other little food thing, whether it was a mazamorra or a corn muffin. I learned with her the principles and values of the humble Venezuelan, of those who never had anything and who constitute the soul of my country. I tried to tell Rosa Ines in that poem that I will never forget her teachings and that I will never betray my origins.